Prepare to get your groove thing on! 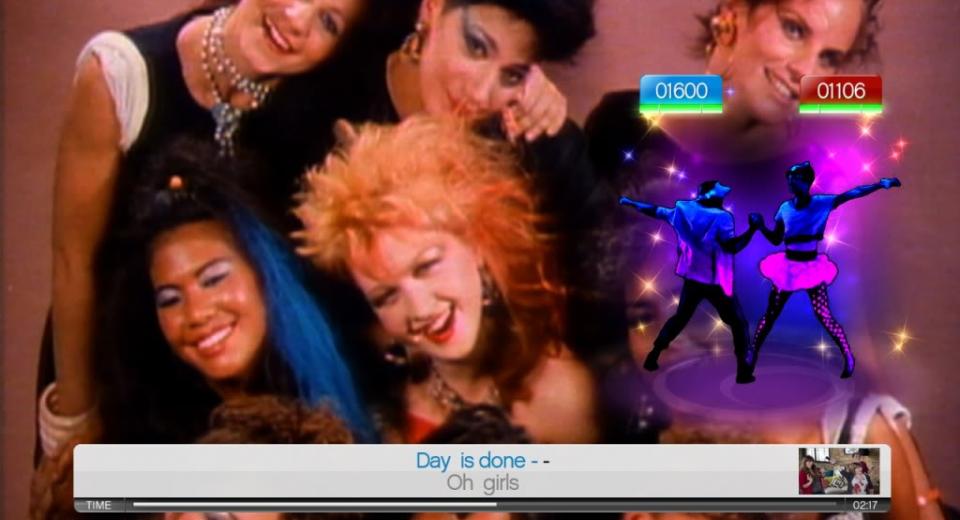 The good people at London Studio must be working over-time and more recently, they’ve already shipped out their guitar version of the popular franchise, SingStar, and now they’re about to spoil us even more with their new title, SingStar Dance. You can’t question London Studio’s credentials and their ability to make quality titles, they make owning a PS3 a joy as SingStar is the best singing game out there and Sony won’t let anyone change that. Their marketing team are clever monkeys though, with the holiday and party season landing next month, they know people will be looking for titles with which they can spice up their get togethers and Sony want to ensure that SingStar is at the top of every PS3 owner’s list.

Only the hardcore fans of the series will be fully aware of the new titles that are in the pipeline as Sony don’t seem to promote their SingStar titles through campaigns or preview sessions. But if you’re one of those who love your microphones and won’t be parted from them, then you’ll be eagerly anticipating this new iteration which will make you look even more of a fool than before. Not being able to sing was bad enough, but now you’ll be scored on how well (or badly) you can dance too. The road ahead isn’t all clear though, as with the Guitar game, people may start to see new SingStar products as nothing more than glorified DLC packs that could have been updated via the PlayStation Network. So in a time where spending is closely monitored by the public, Sony could soon have a situation on its hands if people stop buying their physical products and turn to the SingStore instead.

As you’ve come to expect from the SingStar titles on PS3, their presentation is spot on at every turn. The menu layouts, being identical to all titles that preceded it, are perfectly clear and suitably laid out to make them accessible to everyone. Some might say that the fact that every SingStar has the same layout makes them boring and too ‘samey’, but why would they alter it when it works perfectly and has done for the past few years? Call of Duty (CoD) hardly changes its formula each year yet we still love it, so why should London Studio do any different? They do amend the colours and backing soundtrack though, which makes each title different and it always works. This time around, there’s a nice blue background with spot on backing music (yet again) along with some cheering to go along with it.

The team seem to have done their best this time, as music videos of the last few decades look good, even in HD despite how cruel the format can be to videos made pre-high definition. They’re not pixelated and ugly to look at, they are pleasing on the eye and you will fall back in love with the ‘fashion’ choices from the eighties and other eras, when you see the likes of MC Hammer on the track list. Unfortunately though, the voice control option is still there, and there’s not going to be another rant about it as you can simply leave it switched off and forget it ever existed as it is more a hindrance than a help. All the expected features are here too such as the ability to change your wallpapers, video editing (an optional extra via DLC) and PS Eye compatibility.

Before we move onto the bit you’re all interested about, the dancing, a very quick word is needed with the regards to the voice tracking and singing. Well here it is; it’s as good as ever and the difficulty settings are suitably tailored to it. Nothing more needs to be said other than it’s unrivalled and is the best of its kind, but we all expected that didn’t we? Other than the dancing which will be covered shortly, there is nothing else new to the title which can’t be a bad thing as everything worked well last time around in Guitar, and why spoil an already winning formula?

The dancing is equally as good as the singing structure. After you calibrate the Move controller (which you must hold in your right hand) to your console and it’s recognised as what appears to be a large lollipop, then you’re ready for action. The camera also cleverly judges the parameters to focus on by gauging your height range, which is always right and your height fits perfectly into it. After selecting whether you want to either dance, sing or dance and sing, then you choose your song/video you wish to mimic. Let’s take the dancing on its own first though; once the song has loaded in super quick time, you’re shown a dancer who demonstrates the routine in the bottom right hand corner. The moves don’t always mimic the actual video, so it’s always an idea to keep focussed on this box, and not get distracted by the other images on screen, which can be the actual music video or a live feed from the PS Eye showing you ‘dancing’. Much to your embarrassment.

This is all well and good, but the dancer just gets on with the routine at full speed and doesn’t give you any guidance or delay in the feed to match their movements accurately, and that’s on the easy setting. Nor is there a mode where moves are broken down into a step-by-step routine; there is a training mode, but this is just dancing along to the song without scoring and still gives you no help. Luckily the tracking is a bit forgiving and movements in the general direction of the routine will see you score points for them, which is indicated by a glowing cloud appearing above the dancer. There is a problem if you are brave enough to sing and dance at the same time though, if you happen to own wired SingStar microphones, as the wires can get caught up when you’re swinging your arms about. Some dances require you to use both arms too, so how possibly could you swing your arm to the left, yet carry on singing to the song in perfect timing and pitch? Another problem, as with the Guitar version of the game, the screen looks cluttered when the dancer is on screen at the same time as the tracking for the lyrics and singing. But when you choose to dance or sing individually, then the game is as rewarding as ever and you’ll be happy to see your name shoot to the top of the local leader boards, if you’re good enough that is.

As with the previous SingStar games, this will make the perfect party game and probably even more so when an alcoholic beverage has passed your lips and will provide vast amounts of entertainment/embarrassment. Considering that you can play the game two ways, both of which work very well, Dance offers a unique package that few can rival and along with the wealth of content that is available to download from the SingStore, you’d be hard pushed to find a more comprehensive party game. Don’t expect it to be as much fun by yourself, this is a party game after all, but don’t shun it to the bottom of the pile if you play by yourself and find it boring, that’s not what SingStar was intended for. It is a game that encourages mass participation and being in a group to get the best out of it. What with the Christmas/boxing day party just round the corner, you will get a lot of mileage out of this game as you will at any party or occasion for that matter.

Although the dancing section of this game works very well, it probably will be left on the side by the majority as they just want to sing along to the game, doing a disservice to themselves and the game. . On a similar note too, people will probably start to wonder why the two latest titles couldn’t have been put together to make one large track list, call the game SingStar Party and enable guitar and dance functionality with selected songs. That’s not to say that Dance won’t make a perfect addition to you’re already heaving party selection though, and is a worthwhile purchase whether you intend to dance and/or sing. Your enjoyment will surely be added to by the release of dance compatible songs via the SingStore, so expect those aching muscles and lost voices to continue for some time.

There are some out there who will start to question the SingStar franchise because of the number of titles out there under the brands name. But Dance allows players to get their groove thing on and use Move to embarass themselves and exercise all at the same time. Despite looking and feeling pretty much the same as previous titles, Dance provides a fresh and entertaining experience that many will find to be the perfect christmas party game.