Singin' in the Rain Blu-ray Review 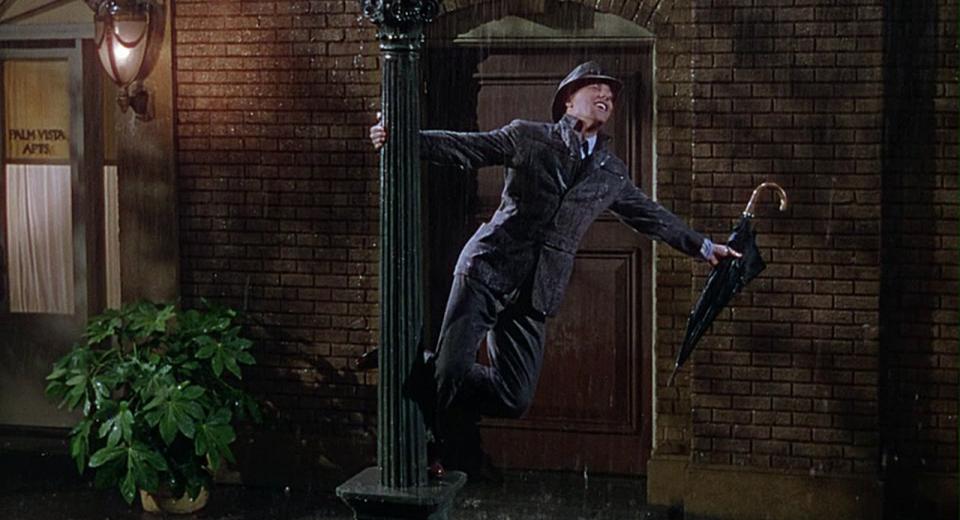 The 1.33:1 24fps AVC-MPEG picture looks excellent. Technicolor’s film developing and printing process was in many ways better than more recent methods albeit slower and more expensive to produce and is considered to be a more stable medium. This has helped to retain a really good looking picture with accurate colour and plenty of deep black. The transfer and clean-up is superb, particularly as the transfer had to be done from a print as the negative was lost in a fire. The detail is still there, but any damage is repaired, the film stabilised and the black level restored. Unlike some restorations, the engineers knew when to stop. Edges are not over sharpened and the smoothness remains. Technicolor’s processing engineers back in the 50s had quite a lot of latitude in terms of colour grading and re-exposure when they printed copies from the negative. That combined with the high levels of controlled lighting has led to perfectly exposed shots throughout the movie. There is a little fringing but this is not too intrusive. There is nothing here to tax or test your TV, but have the colour up too high and the colours will look over saturated. Some skin detail is missing, but this is down at least in part to the inch thick makeup plastered all over the cast! Low level shadow detail is not really evident – check out the DJs in the party scenes, it is difficult to make out the lines of the suits against the darker backgrounds.

Bearing in mind the film was made over sixty years ago, it still looks superb. Technicolor’s film developing process combined with Eastman’s stock made for rich, full colour that all but defined the era. The huge lighting rigs required added to the look and even the limited depth of field is compensated for with the detailed backdrops and sets. This really is first class photography, restoration and transfer. The original mono soundtrack has been re-mastered into a very subtle DTS-HD MA 5.1 surround mix. It has not really messed it up, adding just a little ambience to the soundtrack and a few more obvious effects. The music numbers sound great with the full MGM orchestral treatment sitting under clear vocals. The speech sections are equally clean, with no more than a hint of occasional overload, very little hiss and a nice rounded equalisation.

Western Electric Film Sound was very forgiving of overloads, using an optical soundtrack that compressed gently in a similar way to proper optical compressors. The transfer sits nicely on the DTS stream although of course the dynamic range is somewhat less than we are used to. The last major re-release of this movie for home viewing was a special 50thanniversary DVD dating from 2002. This included a commentary featuring the surviving stars of the movie – Debbie Reynolds, Donald O’Connor and Cyd Charisse. Sadly, Donald and Cyd have since passed away, but Debbie is still very much with us and amazingly still works occasionally. They were joined on the commentary by Kathleen Freeman (who had an un-credited minor role), Co-Director Stanley Donen, screenwriters Betty Comden and Adolph Green, Baz Lurhmann and film historian Rudy Behlmer. After an introduction from the writers, for the most part, the participants take a complete scene to themselves and talk about their involvement or how it impacted them in their movie making going forward. This is a very gentle and lovely commentary and provides much background information to the film.

Another nice extra is the Jukebox. This allows you to select the songs from the movie, arrange them into a playlist and even save your selection (If your player supports this – most will require an additional SD card to enable this) This is really well implemented and is a clever take on most discs where only one song can be selected at a time.

The third proper extra is a 50 minute film with modern contributors discussing the movie and how it has shaped both modern dance and the effect the movie has had on the whole musical genre. Nicely produced and presented in HD, although some sections were originated on SD.

The last extra is an original theatrical trailer. All very pleasant in its own way.

Sadly missing from the extras but present on the 2002 DVD is a cut song from Debbie Reynolds – a solo rendition of “You are my Lucky Star”. Quite why this did not make the disc is unclear.

The disc loads quickly with navigation and all other functions such as resume working well. Language support is extremely wide, with English, German, Portuguese, Spanish, Czech, French, Italian and Polish all available. On the subtitles, we add Finnish, Danish, Hungarian, Norwegian, Russian and Swedish. Warner Brothers really should be congratulated for the quality of this Blu-ray release. It is an important movie and they really have done it justice. While Singin’ in the Rain was not ground breaking, original or a technological masterpiece, it has gone on to become possibly the most iconic musical movie of all time. The transfer really does look and sound very good indeed. An awful lot of care has gone into the disc as a whole and this really comes through.

For such a gentle, unassuming and simple story, this film will magically hold your attention the whole way through. The acting, singing and dancing is of a high quality throughout and the production values are extremely high. I am trying hard to think of a bad word to say about this movie and am really struggling to! A must have for anyone’s collection.