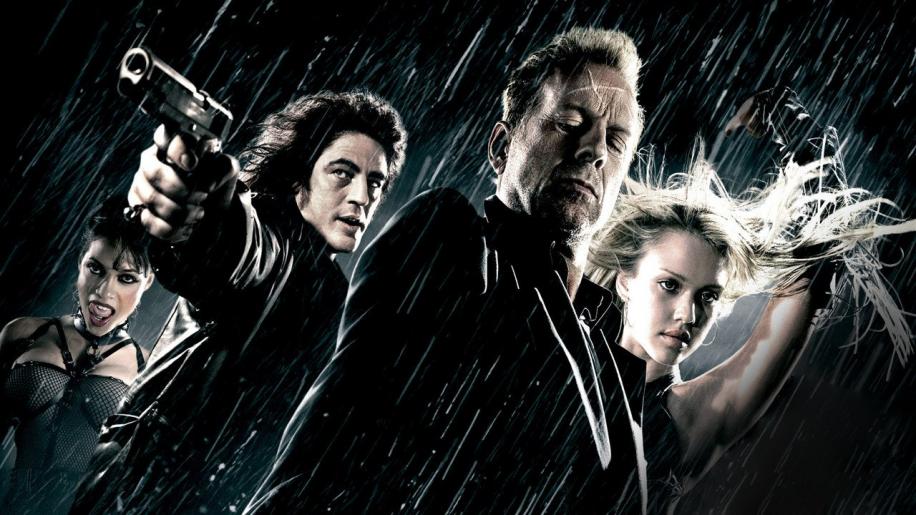 The region 3 version was blessed with a great transfer and this is no different, it's superb. In fact, it's no different in my mind to the R3 in terms of quality, with one exception, I would argue that the reds, particularly during the Marv/Goldie bed scenes are slightly darker, with a slightly more vivid look, it that makes sense. Other than that minor point, it's identical - this is what I said re the R3 release.

Thankfully we have some absolutely deep and dark blacks on hand and the colours don't bleed whatsoever. No artefacts were noticed and grain was not seen whatsoever. There was no print damage, as the film was shot digitally so we have an absolutely pristine transfer here. Detail levels are very high, from pores on faces to the smallest details; I was impressed at seeing the pores on Rourke when he was close up, same for Willis or any other actor in fact. I didn't notice any other issues, but it could well be that the style masks any inherent faults - but either way this is a fantastic looking disk. Unlike the R3 which had a DTS-ES soundtrack, we have a 5.1 DTS soundtrack here instead. First off, there is the occasional metallic sound on the centre channel, but this isn't prevalent through the entire movie and doesn't honestly distract too much, but it is present nonetheless. The second difference is that the ES mix does have a slightly better ambience to it compared to the 5.1 mix here. However, this is still an engaging sound stage, with superb use of the LFE channel, which is deep and rumble well even at low volumes, but at reference levels, this is truly a loud experience and pulls you into the story. Surrounds are engaged nicely for ambience as well as during the frantic action sequences and I'd be lying if I said this wasn't one of the best soundtracks I'd heard this year. However the ES version edges it for me, plus with the minor flaw in the centre channel, it is not quite as good as the R3, hence it loses a point. The only difference between the R3 and the R1 in terms of extras is that the R1 has several trailers that play on spin up. Other than that there's no difference, so here's the original write up of the extras.

The one and only extra we have here is a 9 minute “Behind The Scenes” featurette, which contains snippets from all the principals, but isn't really gushing like most other featurettes. Sure, no-one has a bad word, but there comes across a high degree of sincerity, probably because Rodriguez is a remarkable talent and because the source material is stronger than a lot of things that Hollywood churns out. It would have been nice to see some more extras, but for now this will have to do. As stated before, my opinion hasn't changed whatsoever even after a second (and third) viewing. The shame would be the flaw present on the soundtrack, but it really is a minor one and doesn't really detract ultimately, especially compared to other movies that have come out in recent memory. As I originally said and I stand by my initial statement, this is a faithful adaptation of the graphic novels, in fact it's technically the finest one to date. Don't think this is superhero city as you'll be heavily mistaken - it's noir, it's dark and it is violent. Rodriguez certainly shines here as a director and it's already got a sequel in pre-production. Lucas could learn more than a thing or two here about digital work and story telling, that's for sure. Recommended - maybe we'll see the Directors Cut around Christmas, but until then, this is an essential purchase.