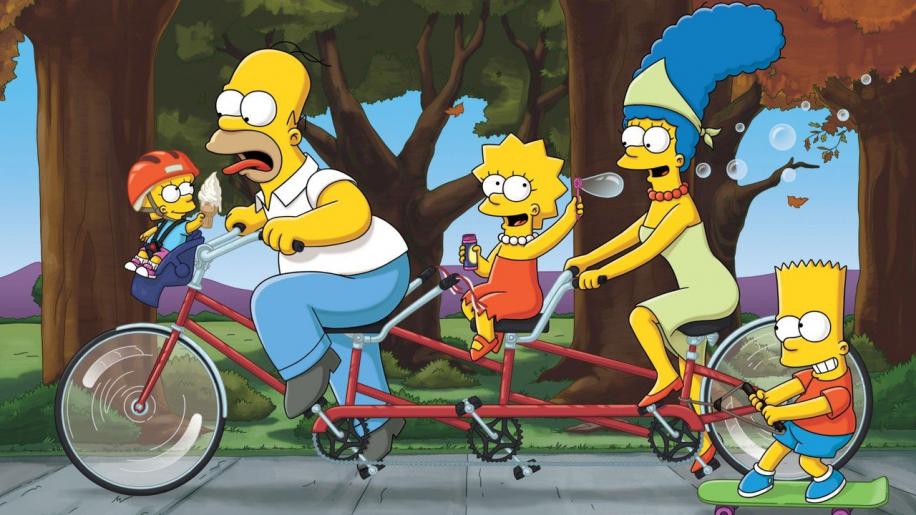 The image on this collection is adequate without being outstanding. Much of the problem lies with the animation itself which is a little rough in places. This and the fact that it was originally made for TV means that blown up on your big Plasma or projector highlights its shortcomings. Saying that, the image is bright and heavily saturated with colour. These colours do not for the most part bleed into each other which is admirable as they are indeed vivid. Edges are a little undefined and there are some incidences of noise over detailed parts of the image.

Blacks also lack depth and come over as more a dark grey. This helps to lower the perceived definition of the image and adds to the softness. Grain is nowhere to be seen and the 1.33:1 aspect ratio cements its TV origins. As I said, adequate but not brilliant. The Simpsons has long championed the use of Dolby Surround on its TV shows and here we have a full Dolby Digital 5.1 surround signal. Being mostly dialogue driven, the surrounds do not really get a thorough workout, but on the odd occasion that they are called into use, the fact that they are heard so little makes there presence jump out at you. Left to right panning is handled very well and the dialogue is clear and easily heard at all times.

Bass is disappointingly light and your subwoofer is left untaxed for most of the episodes. But let's not forget that this is a TV show and not a Hollywood Blockbuster. The sound is perfectly fine for the programmes and the shortcomings I have mentioned do not detract from the enjoyment of the fun on offer. The most important aspect of the sound, the dialogue, is handled beautifully and for that alone I am happy with the quality. They have put so much effort into the extras on here including an Audio Commentary on every single episode. Yes all 25 episodes contain commentary featuring creator Matt Groening, Executive Producers James L. Brooks, David Mirkin, Al Jean and Mike Reiss along with writers, actors and directors. These are so much fun too. Not your run of the mill boring, sombre chit-chat, these are hilarious conversations and enlightening at the same time.

Disc one contains the following extras: 'A Confession From Matt Groening' where he mentions his favourite episodes and how this season is also his favourite season. The only other extra on disc one is the Animatic piece which can be watched with or without commentary. It covers the Halloween episode in it's very early, pencil sketched stage and is considerably more interesting when viewed with the commentary.

Disc two contains no extras besides the Audio Commentary, but again check out the menu page for some hilarious goings-on. Disc Three has, besides the Audio Commentary, A Storyboard/ Animatics Picture in Picture option with multi-angles which allows you to switch between the very basic storyboard sketches to the slightly more detailed and moving animatic sketches whilst viewing the finished piece in the corner of your screen at the same time.

Disc Four is where to find the majority of the extras. First off is 'Springfield's Most Wanted' which is presented as a live action news documentary with excerpts from relevant Simpsons episodes and looks at suspects in the Montgomery Burns shooting case. Next is 'he Simpsons Plane' which is a very short piece looking at a publicity stunt where a jet plane was painted with The Simpsons characters all over it and Matt Groening commentates on why he wouldn't fly on it. Then we have 'Commercials' which has three TV commercials from the States. Two are for Church's Chicken and one is for 1-800 Collect telephone service all featuring The Simpsons. They are all actually very funny and well worth watching. The Special Language Feature allows you to switch between French, Spanish, Czech and Russian language soundtracks whilst watching a complete episode. To be honest, unless you can speak any of these languages, the novelty wears off after about 2 minutes. Lastly is the section titled 'Art and Animation' which besides looking again at the animatics, also shows some original sketches, an animation showcase which is much like the previous Picture in Picture option and finally 'Suspect Profiles' which allows you to highlight a character from the picture and look at their possible motives for wanting Mr. Burns dead.

That's about it. I couldn't find any hidden Easter Eggs so I think I've mentioned all the extras to be found. Still, along with the wonderful commentaries, there are hours of interesting and amusing things to keep you entertained. A superb collection of The Simpsons episodes presented on four wonderful discs. The extras are amusing and interesting and the commentaries are fascinating. Let down only by annoying and flimsy packaging, if The Simpsons are your thing, then I advise to get this collection ASAP. Oh and one last point, I do believe it is possible to get this boxset in a more conventional package. My advice....ORDER THAT ONE!!