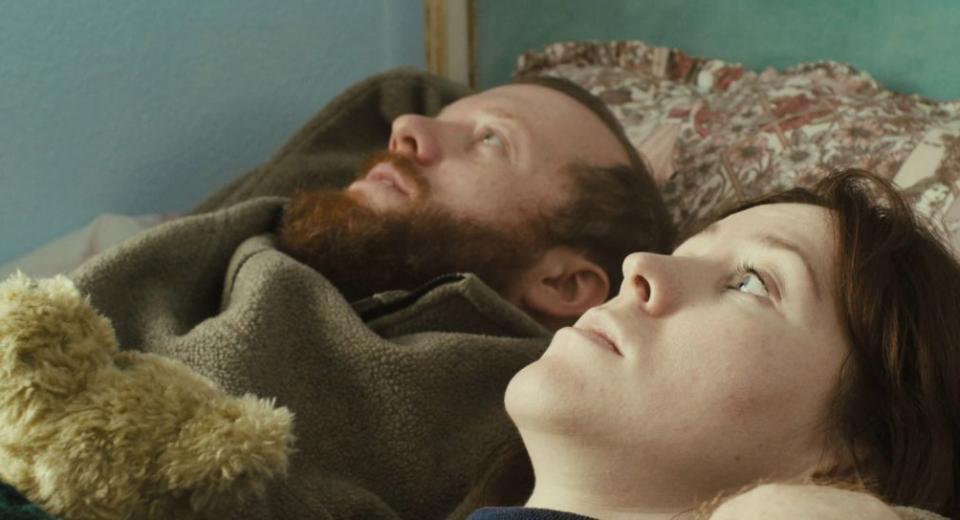 These days it's getting harder and harder to pick fault with the visual fidelity on modern Blu-ray release. This 2.35:1 AVC encode is no different. It's everything you would expect from a movie shot less than a couple of years ago. Sharp, crisp, and clean.

Being set mostly in the British countryside, there has been a concerted effort to capture the natural tones, but this is carefully balanced with the dull greyness you tend to get in the country. A lot of shots feel slightly desaturated, and to it's merit, it genuinely adds to the sense of being outdoors, and above all, the sense of coldness. Skin tones don't suffer though - they appear natural and at times blotchy from the cold. It's arguable that they appear occassionally drained of colour, but this never feels unintentional.

Blacks do suffer slightly from the somewhat drab colour pallette chosen by Ben Wheatley, often appearing slightly washed out and charcoal grey, but it's a minor point when considering the overall look that the director was trying to achieve. Shadow detail is actually very good, but coupled with the slightly below par blacks, this can often be overlooked. It's not a huge problem though, and it's certainly not something you're going to be overly concerned with as it doesn't distract attention at all.

Contrast is another area where perhaps more could have been done. In some of the sunrise shots when Chris is walking across the moors with the sun to his back, the depth of the image is compromised slightly. This is not helped much by the fact that the shot is heavy with mist, which further underlines the problem. Again though, it's no real crying shame, as the photography on the whole is beautiful and really makes up for any minor failings.

On the whole, the visual presentation is totally in keeping with the films narrative presentation. It's naturalistic, at times bleak, and effectively manages to help you feel that darker undercurrent of the main plot.

The DTS-HD Ma 5.1 surround audio track is pretty bog standard really. Nothing pops out at you, but then, it's really not a film that I would have expected my speakers to get a workout. Mostly focussed on dialogue, the balance is well mixed between the ambience and spot effects. Very little appears in the surrounds, but what's there is subtle and effective, usually serving only to open out the atmosphere of a particular scene, or to give the music somewhere to spill over to.

Use of dynamic range is decent, and there never seems to be a lot of sounds all jostling for focus. I did feel that there may have been more scope to incorporate more surround sound ambiences for the outdoor scenes in the rears, perhaps some wind noise might have added to the visceral soundscape. That's nit-picking though.

Overall, it's well balanced, and though there's very little to remark on the sound, there's nothing wrong with it at all.

Pretty light on the extras side of things here, but there's a decent documentary and a couple of audio tracks to get your teeth into, if you hunger for such things.

Making of - A 36 minute behind the scenes featurette that explores the film's production in detail. With comments from actors and cast alike, it's informative, but it's unlikely to have you begging for more.

Audio Commentary with Driector and cast - As you might have guessed from the title of this audio track, it's an amusing and often tangent heavy commentary between writers Steve Oram and Alice Lowe and director Ben Wheatley. I won't lie, I didn't make it through the entire thing. I did find it amusing, but thought it was quite a full on assault on the comedy senses at times.
There's also an additional track that sees Wheatley and Director of Photography Laurie Rose discuss the more technical aspects of the production.

Out-takes - 12 minutes of guffaw-worthy out-takes from cast and crew. It's actually more of a "Deleted Scenes" featurette really, since most of the dialogue featured was improvised, and so to call it an out-take would be doing it a great injustice. Very funny. If you watch no other extras on the disc, watch this one.

Death has a Ginger Beard and Evil just knitted a nice wooly jumper. Sightseers puts me in mind of Natural Born Killers - only, set in a caravan park, with a dog.

Ben Wheatley returns off the back of the astonishingly gritty and critically acclaimed Kill List with another stand out piece of British film-making prowess. Sightseers is a gruesome love story-cum-tragedy that bears all the hallmarks of a cult-classic in the making. Standing up to such greats as A Room for Romeo Brass and Withnail and I, it's every bit as noteworthy in the Black Comedy arena. Easily one of the most original and happily surprising films of the year so far, it's one that any fan of British Comedy will undoubtedly enjoy, and so effortless is the film's delivery that it's likely to become a gateway-film for new fans of the genre to uncover the plethora of British made gems of old.

As a Blu-ray package, it's light, but the films packs a punch that makes up for this in no uncertain terms. With a perfectly acceptible picture and a reasonable sound presentation it's a decent enough package to own. More care might have been afforded to getting the picture's levels a bit more balanced, and the audio presentation could have benefitted from some subtle ambient atmospheric sound design to open it out and utilize the surround array a little more, but what the picture and sound lack, the movie more than makes up for. It's never going to be a go-to disc to show off your system, but it's one that'll fit well into any film lovers collection.