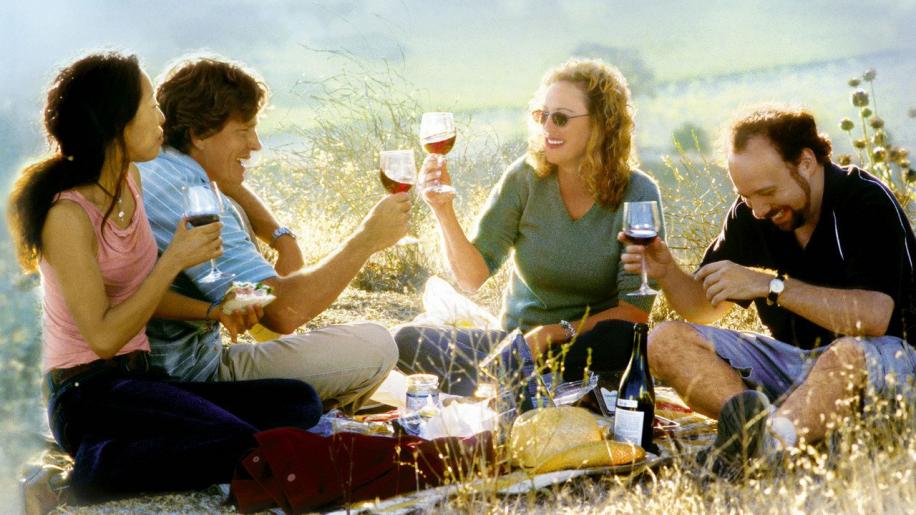 Fox have provided a theatrically correct 1.85:1 aspect anamorphically enhanced for widescreen TVs picture with an average bitrate of 5-6 Mbps, and that's where the good news ends. I was extremely disappointed with this offering from such a modern film. It is possible that Sideways was filmed with soft focus throughout, but I doubt, though areas of soft focus are many, this cannot account for the picture being extremely soft with edges blurring, bright patches bleeding and the occasional smearing. There were also some nasty artefacts cropping up occasionally around the flesh tones of the face and neck of several actors. To make matters worse, there are instances of dust and specks on the print, though rare, and worst of all a thin film of grain throughout most of the run time. Things seem start to improve the further into the film you get, with last act looking the best; but with the entire film there were only one or two scenes when I was happy with the picture. At these points we have bright colours, a clear defined image free from grain and artefacts, but oh so rare to see that. As things start to improve we are treated to good and bad picture together, serving only to highlight how bad the bad really is! Still, as poor as the picture is it is not the worst I have seen, but from such a new film, I would expect better. The packaging would have us believe that the disc has an English Dolby Digital 5.1 surround track, if I hadn't checked, I wouldn't have believed it as just about all the movie is centred at the front. Yes, the film is dialogue heavy and this is where most of the sound comes from, but even the score is directed to the front. I can count on one hand when the rears were put into use and then only for a few seconds of music, never for anything else. As a track it is perfectly adequate, however, if a little too quiet, needing a volume adjustment, but it is functional, clean and clear without distortion or hiss. Just don't expect you speakers to go wild, there is little work for them to do and the poor old LFE gets the night off. First up, we have a feature commentary by actors Paul Giamatti and Thomas Haden Church. It starts up how it means to go on with the pair laughing, cracking jokes and sitting back in silence to watch what is happening. Very light on actual technical information, but informative none the less, the two have an obvious rapport and their laughter at times is infectious, but as time goes on I found myself wanting a bit more substance. Nice to have subtitles to the commentary too.

There are seven deleted scenes, all with a text introduction from Payne that, in his own words, is a rather meagre effort. Without exception all were removed for pacing and range from a few seconds to a few seconds longer. There is nothing substantial and their inclusion could almost be filler.

The behind the scenes featurette is an extremely light affair with much padding from clips of the film. There are interviews with the director and main cast, but little information is given, and the few behind the scenes shots are not explained rather filming of the filming, all rather dull.

The obligatory Fox inside look has a trailer for Kingdom of Hearts, plus when you first boot up the disc you are met with a wall of Fox trailers, thankfully they can be skipped.

I could only find one Easter Egg (there are apparently 3) - On the chapters page 13-16 press left to highlight a bottle and you find a selection of behind the scenes photos accompanied by the theme from the film. Due to the lack of decent extras, Sideways as a disc is likely to survive on the film alone. Thankfully, the film is of a calibre that most can get enjoyment out of it, the box proudly proclaims its numerous awards and deservedly so, hopefully this will entice they casual buyer since there has been precious little advertising and the cinema release came and went without fanfare. The bittersweet tale should appeal to most and perhaps we can all recognise some of the character traits on show....?