All in all, it's a sharp, crisp, and stylized presentation 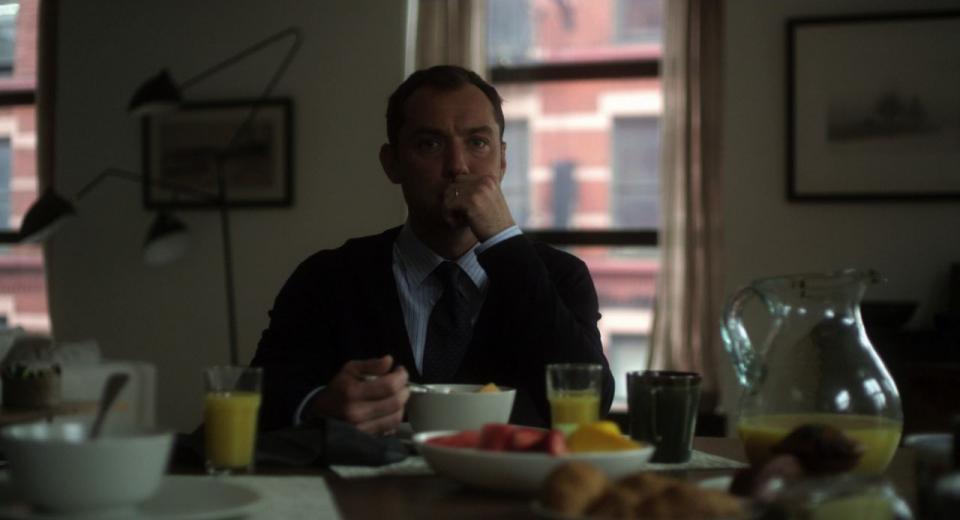 Side Effects lands on Blu-ray with a decent video presentation. It's a crisp, yet stylishly treated image that boasts a 16:9 filling 1.78:1 aspect and a pretty fantastic AVC 1080p transfer.

The colour palette is bold, but wellchosen. Rich in oranges, greens and stark yellows, it's quite a striking image. The photography, as ever with Soderberg's material, is very well thought out and utilizes techniques that draw the eye deep into the image with depth of field and a lot of close ups. It stands up well to critical scrutiny too, with sharp edges that don't seem heavy with any enhancement, and skin texture looks detailed and realistic. With the grading decisions comes the fact that skin tones do seem a little unnatural, but it's quite obviously a conscious decision and not the result of any problems or issues.

Contrast is pushed pretty hard too, and blacks feel strong and deep and bare no signs of any crushing. Artifacting doesn't seem to show it's face much in the deep blacks and shadows either which is a comfort. The grain structure is very subtle, and lends the image an authentic film feel. Shadow detail and fine object detail is decent, and never leaves me wanting.

All in all, it's a sharp, crisp, and stylized presentation that benefits from a confident director, and a skillfull photographer - very good indeed. The DTS-HD MA 5.1 audio presentation is decent too and certainly doesn't let the side down. It's strongest element to my ears is the integration of the evocative score from the wonderfully talented Thomas Newman. It's use manages to elevate the mood and atmosphere of the movie to greater heights.

The dialogue is clean and clear, and is focussed largely in the centre channel. Surrounds are used sparingly, and tend to add depth to the atmospherics of a scene rather than any major extensive use which, given the nature of the film, would seem gratuitous and slightly uncalled for. It's subtle, and it helps spread the ambiences around. The sub channel is also used sparingly, but it certainly adds deoth where necessary, such as the car crash scene in the underground car park. It brings the "thump" when it's called for.
All in all, it's a confident and pretty well thought out audio presetnation that boasts a great dialogue track, wonderful score, and attention to detail, without sacrificing dynamic range. Talk about all filler and no killer - Side Effects certainly can't claim to be a worthy candidate for the additional content award. All in all, barely worth skipping through. Sorely disappointed by this, though it does go some way to reassuring me that this won't be Soderberg's final feature - surely if it was, he would have loaded it up with additional content for the Blu-ray release?

Interviews -
Interviews with the cast lasting around 16 minutes. Some vaguely interesting thoughts on the movie here, but nothing groundbreaking or what I would describe as "unmissable".

True to Life
A 2 minute discussion on the pharmaceutical medication industry with thoughts from cast, writer and crew. I did find this quite interesting, but a little too revealing, so please don't watch this until you've watched the movie.

Making Of
In a curiously lame move, we have a 2 minute long (erm, sorry what?) "making of". Consider this total filler and not very interesting at all, though many of the cast are heard gushing over how amazing Soderberg is.

Reaching too high
A minute and a half focussing on Law's character, Banks. More filler. It's like a trailer with some VO narration.

The Perfect Couple
See previous item, replace focus with the main couple in the movie. Yet more filler, and at a minute and a half, barely worth your time.

Behind the Scenes
Finally something of substance. At 8 minutes, this seemed to promise the extra's first worth item, but it's literally a straight-up series of un-annotated off screen shots. Again, pretty lame really, unless you like to see Hollywood actors sipping coffee and waiting around. Some of the shots have no sound either. It's just very odd.

Ablixa Commercial
Quite a convincing advertisement for the made up drug, Ablixa. I could be in an american hotel room suffering from Jet lag right now.

Intentin Commercial
Same as the above, but for a different drug.

Featurette shot in Super 8
Just what it says on the tin. It's an interesting 3 minute comedy skit that demonstrates that the actors all have a sense of humour. Probably the only thing on the extras I genuinely enjoyed! Side Effects is a weighty, confident and wholly engrossing film that exudes the quality we've come to expect from Soderberg's pictures. It's not a game changer in terms of redefining the genre of the psychological thriller, but it does it every bit as well as many of the genre defining movies in this category. Billed as Soderberg's last movie, it's most certainly not his greatest work, but it stands up pretty well without attempting to re-shape things too much. Good wholesome thrilling narrative delivered well, and with a great cast, it's worth every minute of your precious time that it'll take you to watch it.

As far as Blu-ray packages go, I have to say that the extras let and otherwise perfectly acceptable package down somewhat. Having said that, I will struggle not to claim this disc is worthwhile despite it's shortcomings in the extras department, as for me and many others, Extras are a nice to have and not a must really. The reason to buy a movie on Blu-ray is always about the quality of the movie itself, and this one boasts a great soundtrack, excellent audio presentation, and a stylistic and well photographed video presentation. All in all, recommended.