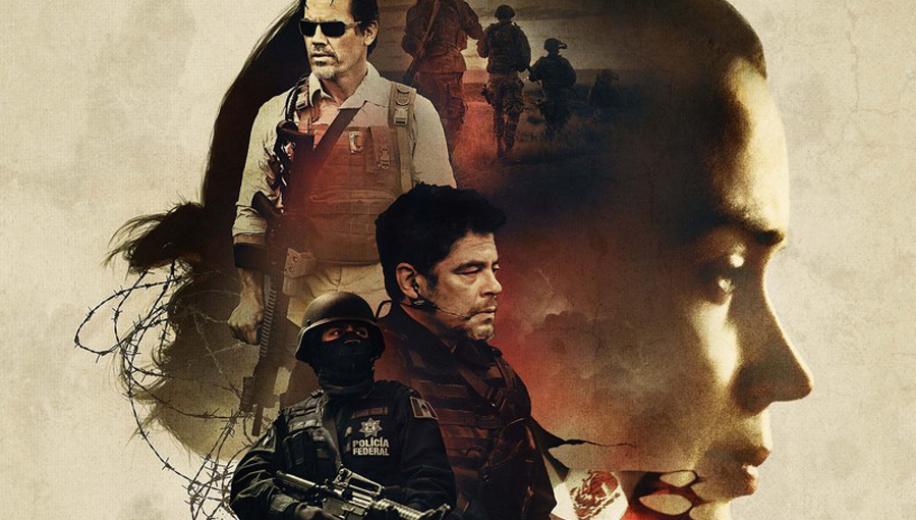 Denis Villeneuve's slow-burn thriller Sicario takes an unflinching look at the realities of the war on drugs as it spills across the border between the US and Mexico, ruining lives on both sides.

The film uses Emily Blunt's tough and ambitious, if rather naive, FBI agent as our guide through this vicious and dangerous world; where Josh Brolin's shadowy CIA agent and his special ops task force operate on the edges of the law. However the film ultimately belongs to Benicio Del Toro's mysterious advisor with his own personal agenda. The film lays bare the hopeless nature of the war on drugs and specifically the way it impacts the lives of those trapped in Mexico on the other side of a border composed of walls and fences. The cartels get rich selling drugs and the US government spends a fortune trying to contain the flow but it causes nothing but suffering for those trapped in the middle, making the whole effort seem futile
The entire cast deliver wonderfully nuanced performances but it's Del Toro who dominates, with a precise and controlled characterisation. Villeneuve not only brings the best out of his leads, but he also delivers a visually and aurally striking piece, setting the stunning images of acclaimed cinematographer Roger Deakins against the oppressive beats of Johann Johannsson’s tremendous score, which literally adds a near-continuous heartbeat to the entire film. Taut and almost unyieldingly tense, there’s no wasted time here; every scene is measured, every shot adeptly framed. The action, when it comes, is short, violent and realistic, and, like its protagonists, the film knows exactly what it's doing and how to manipulate you. Sicario was filmed digitally using the Arri Alexa XT at a resolution of 3.4K and it was finished using a 4K Digital Intermediate (DI), which presumably formed the basis for this Ultra HD Blu-ray release. The film is presented using a 3840 x 2160p transfer in the film's correct 2.40:1 aspect ratio, the disc uses 10-bit colour depth, a Wider Colour Gamut (WCG) and High Dynamic Range (HDR), and is encoded using the HEVC (H.265) codec. We are reviewing the US Ultra HD Blu-ray release of Sicario, the disc has yet to be released in the UK. Our review kit consists of a Samsung UE65KS9500 Ultra HD TV and a Samsung UBD-K8500 Ultra HD Blu-ray player.


This stunning image delivers the detail, natural colours and dynamic range we expect from Ultra HD

Unlike many of the Ultra HD Blu-rays released so far, Sicario is able to take full advantage of the new format thanks to its 4K digital intermediate and comparisons with the regular Blu-ray reveal an obvious increase in detail. Whether it's the landscapes of the deserts around the US-Mexico border or the slums of Juarez, the levels of detail are astonishing with the transfer delivering Roger Deakins careful compositions and gorgeous photography superbly. The fine detail in close-ups is equally as impressive, whether it's the pores on Emily Blunt's skin, the tattoos on the gang members or the nicks and scratches on the weaponry. The same goes for clothing with everything from the weaves of shirts and suits to the badges on uniforms and the Velcro fasteners on Kevlar body armour. The transfer is also free of unwanted artefacts and banding, resulting in a wonderfully precise image.

The colour scheme is very deliberate and at times stylised, with a sunburnt look as arid as the deserts that surround the characters. The dominant colours are red and orange, along with beige and yellow but the flesh tones remain completely realistic and primaries can pop when necessary. The addition of HDR makes a big difference to the perceived image, with the specular highlights on cars, guns and sunglasses giving the image a greater sense of realism. Despite the sun-bleached skies, there is still detail in the bright parts of the image, whilst the many night scenes have deep blacks but plenty of detail in the shadows, making the firefight in the tunnels towards the end all the more exciting. Ultimately the combination of resolution, colour gamut and dynamic range results in a marvellous overall image for Sicario and a great job from Lionsgate. Sicario was released theatrically in a number of audio formats including both Dolby Atmos and Auro 11.1 and the Ultra HD Blu-ray uses the same Dolby Atmos soundtrack that was included on the original Blu-ray release. This soundtrack is a near perfect example of how to effectively use the added freedom that Dolby Atmos offers to enhance the viewing experience. From the opening shots, as the percussive score slowly builds, there is a sense of growing dread. The mix puts you right inside a SWAT van as it approaches a target's house, adding to the feeling of building tension, and an explosion early on will blast through your lounge. The brief moments of gunfire are suitably realistic, with a physical kick that you would get from genuine ordinance and an audible sense of bullets hitting bodies and walls. This soundtrack is all about dynamic range, going from silence to chaos in a heartbeat and creating a sonic impact that is highly effective.

A firefight inside a series of tunnels is especially impressive as the added overhead speakers completely immerse you in the claustrophobic environment; shots echo around you and sand seeps down from above your head. There are also a number of excellent helicopter flyovers, always a great effect for a sound designer to add to a mix and something that Dolby Atmos is especially good at representing. However amongst all this the dialogue is clear and centred whilst the score weaves in and out of the mix like a heartbeat, adding to the tension in an incredibly effective manner. The film also manages to add plenty of subtle atmospheric touches and, as an example, a scene where birds fly from the front left to right speakers via the front overhead speakers is very effective. The mix is a masterclass in audio design, mixing subtlety and impact in equal measure and delivering a soundtrack that perfectly compliments Sicario's marvellous images.

The US Ultra HD Blu-ray release of Sicario comes in a black Amaray case with two discs, the Ultra HD Blu-ray and the Full HD Blu-ray. The Ultra HD Blu-ray doesn't use regional coding, however the Blu-ray is locked to Region A. The package also includes a digital HD copy of the film, although you probably won't be able to redeem the code in this country.

Stepping into Darkness: The Visual Design of Sicario (HD, 16:45) – This featurette shows how the film's themes were brought to life, with emphasis on Roger Deakins' cinematography and Patrice Vermette's production design.

Blunt, Brolin & Benicio: Portraying the Characters of Sicario (HD, 14:35) – In this featurette the director Denis Villeneuve and the film's stars discuss their characters' journeys and how they fit into the film's overall message.

A Pulse from the Desert: The Score of Sicario (HD, 06:19) – In this featurette the film's composer Jóhann Jóhannsson and director Dennis Villeneuve discuss the inspiration behind the film's highly effective score and how the music's design helps drive the narrative.

Battle Zone: The Origins of Sicario (HD, 13:45) – This final featurette provides a brief overview of writer Tyler Sheridan's inspiration for the film and includes interviews with experts on the Mexican drug cartels and the US war on drugs. Sicario shines a light on the murky realities of the Mexican drug wars, showing the lengths that law enforcement are prepared to go to in order to beat the cartels. The film doesn't takes sides or judge, it simply shows the situation for what its - hopeless. The US and Mexican governments are operating on both sides of the law, whilst innocents suffer and corruption is rife. The cast is uniformly excellent, the script tight and the direction focused, resulting in a tense and realistic portrayal of a violent and dangerous world.


A great film, stunning images and a sublime soundtrack makes this a must-have disc

Lionsgate have done a fantastic job of delivering Sicario in the best possible way on Ultra HD Blu-ray, making the most of the format's higher resolution to produce wonderfully detailed images. The colour scheme is deliberately stylised but remains natural and perfectly reproduced by the disc, whilst the use of high dynamic range adds a level of effective realism to the film. Sicario is one of the first must-have discs of the new Ultra HD Blu-ray format.