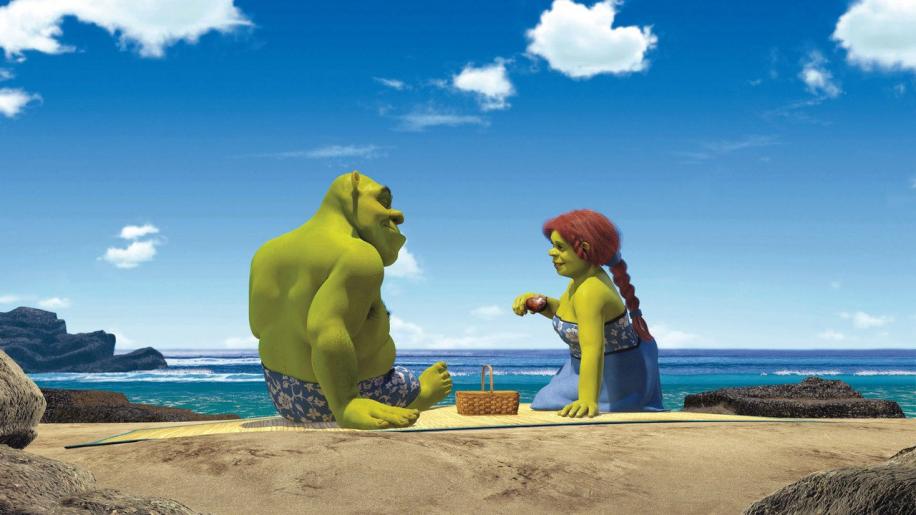 Shrek 2 harbours as good an animated image as I've ever seen. Grass sways in the wind with fluidity, looking perfectly smooth, natural; colours are vivid, solid and striking; the main character's facial expressions are so, well, animated. There is a depth of field to the image that is simply awe-inspiring. Shrek 2 has it all - by the bucket load.

Take a look at Shrek's whiskers, the King's facial expressions, the way the puppy jumps into Princess Fiona's arms... all have incredible detail. If you focus less on the immediate action taking place on screen and take the time to have a look at the animated backgrounds you will be amazed by the intricacy and attention to detail. Move over Monster's, Inc., there's a new boy in town. The 448Kbps Dolby Digital 5.1 track is clean and tight, but I found it a little laid back relative to some other animated movies - Toy Story and the aforementioned Monster's, Inc. certainly sound more dynamic and involving. Bass here is nice and tight, and the musical moments have sparkle and energy without ever really threatening the best in class. One thing that did slightly bug me was Antonio Banderas' voice, although this has little to do with the way the audio track has been mastered. Perhaps it's just me, but I often found myself struggling to fully make out what he was saying and his jokes were sometimes grasped a nanosecond too late. But like I say, that could simply be a failing of mine and nothing to do with Banderas or the audio. Compared to Mike Myers and Eddie Murphy I still reckon his timing is slightly off, though - but they are comedians, so that's probably to be expected!

All in all, whilst not quite up to the standard set by the phenomenal image quality, audio is clear, concise and perfectly adequate. Reading through the list of supplemental features one could be forgiven for thinking that there was an enormous amount of material here. Sadly, that's not quite the case. I found Meet The Cast and Meet Puss In Boots the most interesting features, but all the extras are reasonably short and there's nothing to really get your teeth into. In fact, as far as I'm concerned, the Technical Goofs bit could have been left out completely... maybe I'm getting old, but this stuff is lame and simply unfunny! I mean seeing Shrek with long arms, or Donkey with a fuzzy face? Like I said... it's just not funny.

There are two audio commentaries - one with two of the movie's three directors Kelly Asbury and Conrad Vernon (the third was Andrew Adamson, but he was in New Zealand when the commentary was being recorded) and one with producer Aron Warner and editor Mike Edwards. Neither really does Shrek 2 justice, but they do impart a lot of information about technical difficulties faced and overcome, as well as what was trying to be achieved with the movie. Of the two I found the director's commentary a little less dry and it certainly held my attention more.

As far as supplemental features go things are OK, but the movie itself deserves better. It's mentioned a number of times in the rather scant extras... Shrek 2 is a step up from the original in animation and overall movie terms - and for the most part, I'd agree. Whilst the extras are a little dull and on the short side, audio is good and the image is simply stunning. This release gets a recommended verdict from me, but I wish the movie hadn't become quite so self-indulgent.