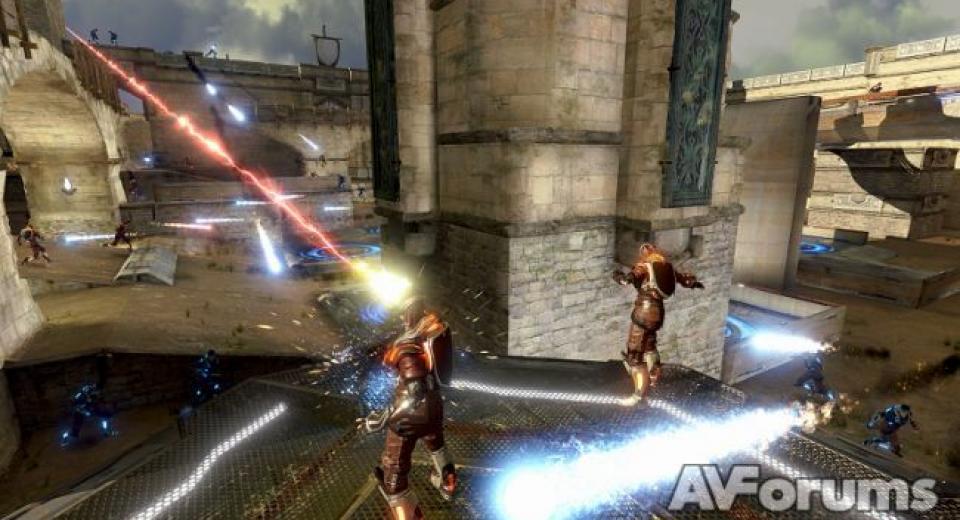 I hate to gush, but I’m going to gush.

That solitary sentence above has been the totality of my ShootMania Storm review since I wrote it last night. Right now I'm sitting at my desk with this document up on one screen, and the game running on the other. Every time I’ve told myself it's time to write some more, I’ve found myself playing again.

I've convinced myself there are valid reasons, of course. It was crucial that I played for half an hour in order to be sure the jump wasn't too floaty. (It isn't.) And of course I had to double check the game modes to be certain I'd understood the rules. (I had.) And was I currently ranked 48th or 46th in London? Better play another... (I'm now 32nd. *proudface*)

So if you'll excuse me I'll have just another game before I get down to the review proper. Just one more. Promise. You might already know of ShootMania Storm; the beta has been around for a while. It's essentially a stripped back multiplayer twitch shooter that recalls Unreal Tournament and Quake. And because it comes from Nadeo of TrackMania fame, it emphasises customisation, including a fully-featured map editor for all your cartographic needs.

Nadeo couldn’t have chosen a more apt title than "ShootMania": You shoot, it’s manic. Just a few minutes ago - before finally getting down to writing this - I won a round of ‘Royal’ and I’m still shaking slightly with the adrenaline. I can't remember the last game that made me shake.

The developers are keen for ShootMania to break into the eSports scene but that's no reason for the rest of us to be put off, the learning curve is manageable once you get beyond the first hour or so. Notably, the community - at least at this stage - is friendly, entertaining and helpful, which makes all the difference when learning the ropes. It also bodes well for ShootMania's longevity; user-generated content is thin on the ground at present but there's no reason to doubt it will come in time based on the people I've encountered so far. When I say ShootMania is stripped back, I mean really stripped back. Forget about loadout options, killstreak rewards and levelling in the Call of Duty sense. There's none of that.

In ShootMania it’s WASD to move, LMB to shoot and Space / RMB for 'action'. A tap on 'action' will (usually) cause you to jump and you can (usually) sprint by holding the button down.

I say 'usually' for what 'action' does because the behaviour of the button can be modified depending on where you're standing. On some paths, 'action' will make you sprint without jumping at all, while health-restoring panels disable its functionality altogether.

Similarly, the gun you are using changes depending on where you are; there is no manual way to switch weapons. The default rocket launcher carries only three or four shots and takes a few seconds to recharge. If you enter an indoor area you will typically be switched to a proximity mine launcher, and by some windows you'll be armed with a powerful laser instead. It can be a little confusing at first but it quickly becomes second nature.

ShootMania requires you to move fast and pick your shots carefully. If you fire off all four rockets at an opponent and miss, you’ll have given away your position and be effectively unarmed until your weapon recharges. Measured shots aimed at where you expect your target to be are the order of the day -- it took time for me to sharpen the rusty skill of strafing unpredictably while shooting accurately, and the pace at which ShootMania moves is relentless. You learn through failure, but it's rarely frustrating. I mentioned ‘Royal’. It’s one of the handful of game modes currently available, and it’s my personal favourite. It takes place on large maps with a capture point in the centre. Royal plays like a standard deathmatch until someone secures the pole. When that happens, the spawn points are deactivated and it becomes a last man standing affair with the added twist of an insta-kill tornado that closes in quickly from the edges of the map.

The tactical considerations of the opening moments are reminiscent of The Hunger Games, in which participants must elect to make a mad dash for the central Cornucopia, or to steer clear of the early carnage. Taking the pole in Royal earns a large points bonus but once the eliminations begin you can easily find yourself surrounded and exposed.

During the middle game the storm forces everyone to the centre (manipulating players’ movements is also Hunger Games-like) making camping nigh-on impossible. The very final moments usually involve two or three players in a tiny area bounding erratically around the pole as if performing a May Day ribbon dance with rocket launchers. It's utterly thrilling to be involved in.

The other stand-out mode is Elite. It’s a 3v3 match in which teams take it in turns to defend a single capture point, but only one player attacks at a time. The attacking player is overpowered compared with the defenders but three against one is tough regardless. The attacker's teammates spectate as he or she plays, adding a layer of self-conscious tension that takes a little getting used to.

There's also Battle, which is a take on Domination in which teams take it in turns to attack, with the initiative switching whenever the attacking team goes for 15 seconds without any player attempting to capture a pole. Then there's Joust, a one-on-one mode that feels comparatively lacklustre; and Combo, a newly released two-on-two mode that unlike all the others features collectible weapons and upgrades around the map.

As you'd imagine, the map editor is extremely simple to interact with -- not least because it's possible to flick between design view and a playing view at the push of a button. In this way I was able to knock together a broadly functional map in an hour or so, and I’m sure people with better skills will be able to produce some fantastic environments. In particular, ShootMania's possibilities for vertical play are huge, and that's something that isn't really explored enough in most of the standard maps. ShootMania won't be for everyone. A lot of people won’t get on with its old school twitch-shooter demands. It’s stressful, if nothing else, and most modes require a little patience as you spectate on others when you’ve been eliminated or while you wait your turn.

In gameplay terms the main frustration I’ve encountered is water. Fall in and you won’t be able to shoot, and it’s an absolute pain to get out: you’re a sitting duck. Fortunately, only a couple of maps feature water at present.

The ManiaPlanet front end is one of the main reasons I didn’t find ShootMania immediately accessible. Rather than just sitting under a simple menu, game modes have to be added and accessed as if they are separate games. I also struggled at first to find how to access some fairly basic functionality - like adding buddies - and although it becomes second nature once you know your way around, it’s an unnecessary inconvenience.

And that’s the story with ShootMania, really. Some may be put off early on, but spend the time to understand the game modes, the interface, the effects of the various panels and pads, and you’ll be rewarded.

Success or failure, as ever with these things, will depend on community take-up, and early signs are very promising indeed. Nadeo have done something here that I wouldn’t have thought possible: through a cunning refresh of first principles they’ve made the competitive FPS interesting to me again. Great stuff.

From the makers of TrackMania comes ShootMania, a stripped back twitch shooter that has its roots in an era closer to 2003 than 2013. But its imaginative take on established game modes and its wealth of customisation options set it apart from what's come before, and makes it well worth your time.