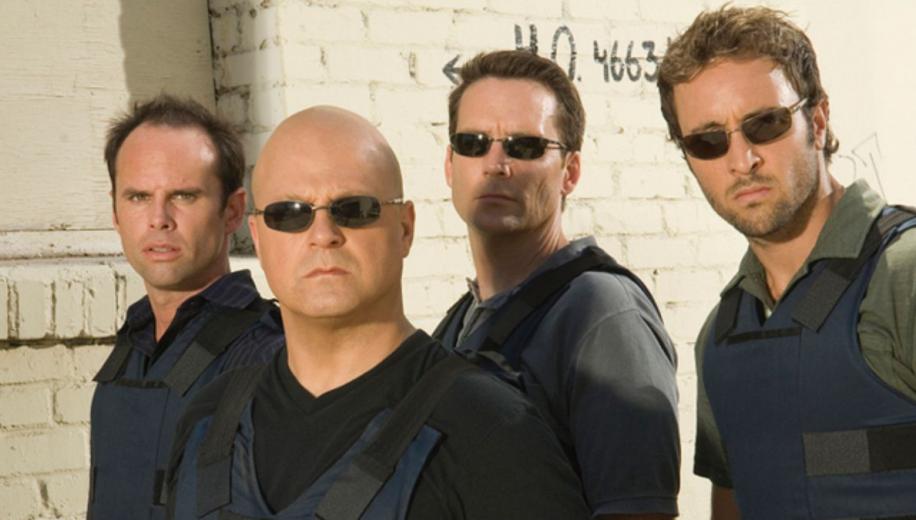 As usual for the R1 discs, this is a fullscreen transfer (R2 get 1.77:1 anamorphic). As such it is strange watching with such a restricted view of the action. What makes matters worse is that the picture is, intentionally, poor. Artificial grain is added (or left) on the picture, reducing detail and overall resolution. This is with a view to lending the series a documentary feel, much like Hill street Blues, NYPD Blue or Battlestar Galactica (2004). Sometimes this works, but other times it just looks plain bad. The hit rate is at least better than series three, mind. Colour is not as saturated as Lost, instead appearing to be washed out, possibly to add to the dilapidated feel of some outdoor locations. As I have mentioned several times before, though, this cannot be held against the shield. Indeed, some brif lapses aside, the graded picture adds to the series more than not.

Strangely, however, the episode “Back in the Hole” was filmed in an anamorphic widescreen ratio of 1.77:1. The difference in presentation is staggering and, if there is any justice in this world, the next series will all be like this! Dolby Surround only, I'm afraid. Compared with other series with a full 5.1 mix, there is a definite lapse in overall clarity and dynamics. Dialogue, while perfectly adequate, looses that last stretch of timbre that actors must really miss when listening to the series on DVD. This is probably due to treble performance which is vague and lacking ultimate detail. Midrange is perfectly fine, if not outstanding giving the majority of the sound a slightly flat feel. Bass is really not present at all, probably as a consequence of a none discrete sound format. Unlike the forced degradation of the picture, soud quality really should be better than this. Like in Saw, sound can add a fantastic sense of dirt, decay and suspense. All these elements can only benefit a show like The Shield and I hope that an introduction come series five occurs. Under the Skin is the only extra per se. Under the Skin is a lengthy documentary on some of the cast and crew. IT is not actually a making of... as this has already been covered in previous chapters of this series. Instead, we get highlights of the crew's actions as the series was shot. Writers give insight into why a certain scene was added, why an actor took this or that route or offered a certain direction for their characters. Much more emphasis is placed on how the actors prepare themselves and get under the skin, so to speak, of their respective personas. Anthony Anderson's frankly astonishing duel toward the end of the series is both scrutinised at lauded at the same time in this regard. Walton Goggins's method acting approach was also of interest: he, for the duration of his work on set, is Shane and does not break character until he leaves the car park on the way home. It reminds me of Brad Dourif who played Grima Wormtoungue in the Rings trilogy where he used an English accent twenty four hours a day for the entire shoot. This acting method undoubtedly gets results but, considering the content of The Shield, this must get to the actors after a while, surely?

Commentaries are good, with some laugh out loud moments contrasting nicely with the often grim source material. While not every episode has a commentary, enough of them do to give the entire main cast a good chance to voice an opinion.

Deleted scenes are certainly plentiful (42 in all) and more than a few have some genuinely useful content. None of the scenes are absolutely necessary, though, with the main series loosing very little in their loss. Another fine addition to The Shield, even if more than usual is demanded of the watchers investment. Patience, as they say, is a virtue and in this case would certainly be rewarded with some top quality television.