Sherlock Holmes: The Mystery of the Frozen City 3DS Review 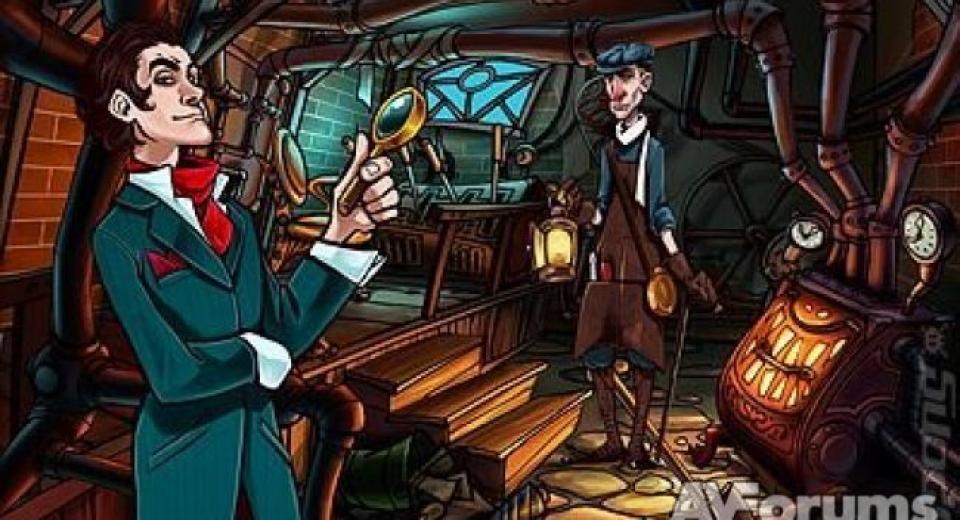 Sherlock Holmes: The Mystery of the Frozen City Video Game (2012)

Another lightweight puzzler arrives on a Nintendo handheld console, but this time carrying the name of fiction’s most famous detective, Sherlock Holmes.  Coming from Frogwares, who are more familiar to most for crafting a string of dark and moody PC titles using the super-sleuth as their basis, this game - as with its predecessor on the DS - shares little beyond the iconic aesthetic hallmarks of Conan Doyle’s creation, being altogether fluffier in tone and with a coddling air.  It’s straight out of the cuddly school of puzzlers, being all bright colours and quirky characters.

London is in the grip of a big freeze of unnaturally epic proportions, and once you find the invention behind this ice storm a mad plot unfolds involving robots, crystals, and a mysterious figure who’ll need no introduction.  It’s all very alt-world and steampunk, which as a fan of the character should grate with me, but somehow the art style and overall bizarro kookiness of it all undermine any sense of stuffiness even adults may approach the game with.  Once you’ve found a teleporter that needs caramel to run you can’t turn your nose up at anything. It follows the Phoenix Wright narrative led puzzling ethos, so there are no side avenues to explore and no great wandering to sniff out hidden teasers to fill out your time.  You peer about the somewhat 3D scenes using the bottom screen as a stylus pad to move your pointer which appears on the larger, 3D enabled screen.  You must investigate the vivid backdrops, collect objects necessary to solve logical problems which lie in your way, ranging from the mundane (opening drawers) to the absurd (mechanical mice to scare a mechanical elephant), and repeat the process.  Objects are picked up without any puzzles precipitating the action, but when they are put to use - such as tying your collected rope into an incomplete net - the standalone puzzle is triggered.

The use of icons indicating which rooms have things left unsolved/uncollected means there’s almost no need to remember anything, which undermines any real sense of satisfaction.  If you’re stuck finding that elusive something that’ll help you in your travels within a scene then a quick tap of the question mark icon and it’ll be highlighted for you.  There’s a very real danger with a game like this that it wholly underestimates the younger/casual market by offering up a hand-holding experience that relies at times on mindless jabbing of the stylus and the ability to read. Bizarrely, for such a nannying puzzler the escape route for anything that stumps you - few and far between, but surprisingly present in small numbers all the same - isn’t more Layton-esque.  With no score system in place there is no descending nature to the kudos achieved that can be tied into a hints system.  All you have at your disposal is a skip facility: a bar that automatically fills as time passes.  This red meter can be prodded in haste but Watson will continue to call for patience, meaning the breathtaking speed at which you’ll breeze through the rest of the game is brought down to a snail’s pace when you’re genuinely in need of a subtle prompt; it’s either all or nothing.  What makes matters worse is the fact that these more fiendishly crafted head-scratchers don’t even come with an explanation afterwards.  It feels like the only time that progression isn’t guaranteed and thus the time that needs to be savoured, a casual crowd will want a delicate nudge in the right direction rather than an either-do-it-or-don’t rather binary dilemma.

The actual mechanics of investigating your environments aren’t much subtler.  The now customary tap-to-select nature of these games is eschewed in favour of a simpler auto-select function whereby the pointer is left over an object/location for it to be selected.  Easy-as-winking, only the movement of the pointer isn’t akin to a mouse mat whereby you can slide the stylus in multiple movements to get across the screen.  Instead, the dimension of the touch screen - and where the stylus is prodding - directly correlates to where your pointer is in the picture.  You’ll hit HUD icons by mistake and - in conjunction with the lack of tap-to-select - you’ll keep highlighting pointless items which trigger unnecessary (albeit small) text explanations that remain on screen for a few seconds each time.

The steampunk nature of it all helps things along slightly, tools such as the F.R.O.G. glasses - which can use multiple lenses that enable special abilities like X-ray vision - keep the formula from getting so stale as to reach outright boredom or frustration at the crushing linearity, but a zany atmosphere can only gloss over so much, and there’s nosign of the kind of inventive scripting this type of adventure can throw up.  The occasionally charming character designs are let down by run-of-the-mill accompanying dialogue that seems to sidestep humour like it was a landmine. All the puzzle types are here - tessellating objects, cryptic numbers, object ordering, even that old faithful of the puzzle genre (and one that screams of shaky ground and the need for filler) solitaire.  They sometimes come with a neat and subtly charming twist, such as ordering a gentleman’s pipe collection, but a slightly characterful puzzle doesn’t make for a good one.  The game relies almost solely on its casual audience buying wholesale into its kooky charisma, something it would have more success with if the scripting harked back to the golden age of the point-and-click graphic adventure game, but without a sharp script and with a distinct lack of voice acting there's little substance to back up the eye-catching scenes.

Sherlock Holmes: The Mystery of the Frozen City 3DS Review

Sherlock Holmes: The Mystery of the Frozen City does little with the characters at its disposal and aims squarely at colourful backdrops to bewitch and easy progression to avoid scrutiny.  The puzzles are commendable in being a picture of clarity, requiring little explanation, but when one does trip you up the lack of a proper hint system becomes instantly noticeable, and undermining to a casual player.  For a narrative-driven game it must be praised for managing to make pick-up-and-play small gaming sessions a breeze, but it does so at the expense of what should have made it a treat, namely the charm of the characters and the humour the setting could offer.  Without really hitting that target it remains a run-of-the-mill puzzler, of which the console will have many, and already has better.