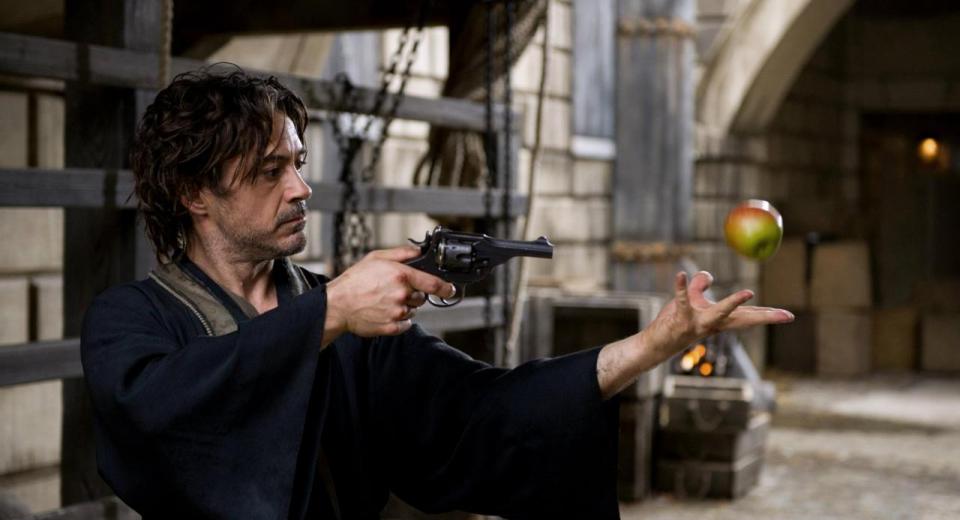 Retaining the same heavily stylised look that Ritchie adopted for his first Sherlock Holmes outing, A Game of Shadows looks almost the same: a gritty, grimy period style pervading the piece and leaving it distinctly difficult material upon which to level a demo quality tag. On Region Free UK Blu-ray, the film looks exactly the way it should – retraining every element that makes Ritchie’s almost-trademark stylisation what it is. For the most part, this is excellent news, with generally very good detail; fine object examination; and broader landscape representation. Digital defects are almost non-existent – there’s certainly no aliasing, ringing, edge enhancement or banding on offer, and over-zealously applied DNR is not an issue either – but there are still two issues that carry across from the rendition of the first movie: the handling of noise and black levels. Whilst the colour scheme has been obviously tilted in favour of a faux pre-20th Century Victorian style – with the various shades of brown making this feel, at times, not wholly unlike a fine period painting – there are still plenty of vibrant tones that break free of the stylised palette, and skin tones remain healthy and reasonably accurate to boot. Black levels, however, are still that little bit overpowering, often allowing the shadows to swallow up rather than enhanced the proceedings; and the noise issues – which are likely a part of the original source rather than result of the encode – probably won’t bother most, but do still contribute towards this remaining a very good but not reference quality rendition of the blockbuster sequel. On the aural front we get an expectedly bombastic DTS-HD Master Audio 5.1 mix that certainly enhances the piece and keeps things rollicking along at a reasonably fast pace throughout. Cleverly balancing the soft-spoken, quick-fire delivery of Downey Jr.’s Holmes – which verges on incoherent mumbling – with the grand-set-piece-driven effects elements and the raucous score from Hans Zimmer, the track is both subtle and well-pronounced, with some strong, persistent and engaging LFE input and plenty of all-encompassing surround work. Effects are observed well at both ends of the spectrum, crafting a heady atmosphere irrespective of the on-screen action (or lack thereof), with the louder sequences obviously boasting a much more pointed, aggressive tone – the fleeing-through-the-forest scene you might remember from the trailers coming across as one of the most ground-poundingly stomping parts of the film. Overall, this one tops the video and muscles its way into reference quality, boasting power, presence and precision. It may not seem like there’s a great deal in the way of extras on this release, but between over half an hour of streamlined, information-packed behind the scenes Featurettes and a thoroughly engaging Picture-in-Picture Maximum Movie Mode track, fans will find all of the bases covered.

Maximum Movie Mode – Inside the Mind of Sherlock Holmes

As with the release of the first movie, A Game of Shadows sports, as its highlight, a comprehensive, immersive In-Movie-Experience mode that offers a near-continuous background accompaniment hosted by none other than Robert Downey Jr. himself. With an introduction by Downey Jr. we take to the movie proper, with our host popping up across the runtime to offer up some split-screen behind the scenes footage, cast and crew interview snippets, and picture-in-picture shots of the scenes being filmed and the storyboard deconstructions; often finding ourselves prompted by numerous icons across the runtime, which allow direct access to the relevant stills galleries and the like. Downey Jr. makes for a great, witty and charmingly self-depreciating host, and this is well worth the time and effort.

Here we are allowed direct access to a bunch of excellent background Featurettes, samples from which can be seen in the IME track above. Each features a decent amount of behind the scenes footage, cast and crew interview snippets and final film comparison shots, without too much fluff to pad them out.

Holmesavision on Steroids spends 4 minutes looking at Ritchie’s approach to taking action to a whole new level in this sequel.

Moriarty’s Master Plan Unleashed offers up a 7 minute look at the two arch-enemies, the way in which they were brought to life here and the actors who played them

Sherlock Holmes and Dr. Watson has Robert Downey Jr. and Jude Law spending an amusing 5 minutes reflecting on their chemistry both on and off set, and the key ingredients that make them such a good couple.

Meet Mycroft Holmes is a 6 minute offering with Stephen Fry, who explains how he has been a lifelong Holmes fan, and how much he loved being a part of the movie, with the rest of the cast and crew noting how much he brought to the table thanks to his knowledge of the source material.

Sherlock Holmes: Under the Gypsy Spell gives us 4 minutes in the company of Noomi Rapace and her gypsy troupe.

Guy Ritchie’s Well-Oiled Machine spends just 3 minutes looking at supporting cast and all the little things that go into making the end product.

Holmes without Borders rounds out these Featurettes with a 6 minute look at the more international, globe-trotting aspect of this sequel.

Sherlock Holmes: A Game of Shadows Movie Approunds off the disc, allowing you to download an App to your phone so that you can watch the movie whilst interacting with various extra features available through your phone / iPad – like the script. If you go into this expecting another grand Sherlock Holmes tale then you may well be a little disappointed, the flawed story almost buckling under the weight of the mammoth runtime and threatening to outstay its welcome. Yet you’ll likely stick it out largely thanks to Robert Downey Jr.’s take on the Great Detective, making Guy Ritchie’s hit-and-miss steampunk sequel so much easier to swallow, flaws and all. Whilst few are going to deny that this movie should have been so much better, there’s still plenty to enjoy about A Game of Shadows if you let the rollicking, globe-trotting action adventure sweep you up and carry you along for the ride.

Released on Region Free UK Blu-ray several weeks before the US counterpart, the excellent video and audio and comprehensive Maximum Movie Mode track will likely be enough to justify not waiting around for what will almost certainly be an identical Stateside counterpart. Fans of the first movie should definitely check this out and will probably find a place for it in their collection irrespective of its worth. It’s certainly worth a rental at the very least and it hasn’t put me off still having high hopes for the third chapter.