"Come now, did you think you are the only one who can play this game?" 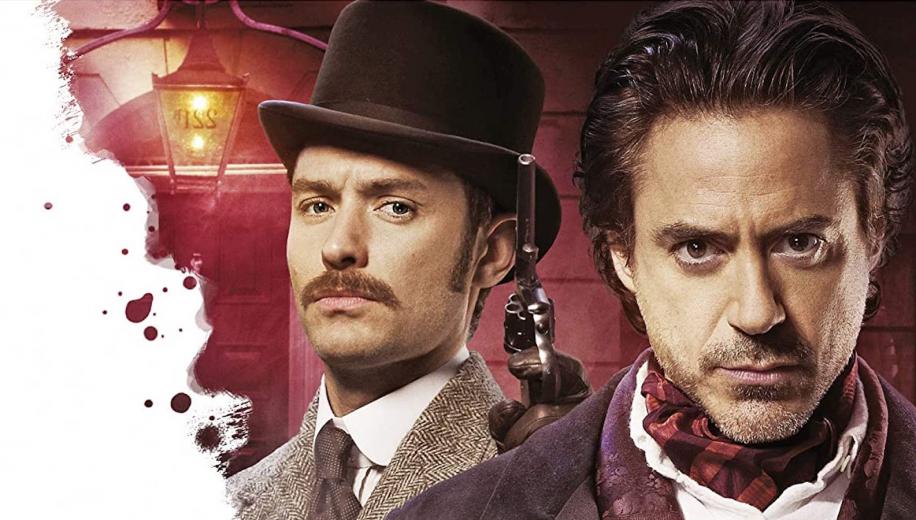 A great start and a tremendous end mostly make up for a lazy middle with this 2011 follow-up to 2009's Ritchie/Downey Jr. Sherlock Holmes reboot.

Warner have done a cracking job integrating the two Guy Ritchie / Robert Downey Jr. Sherlock Holmes outings, not least by overdubbing the shadowed Moriarty figure introduced as the enigmatic uber-villain in the first chapter, with the voice of the actor who would be perfectly cast as him in this sequel: Jared Harris. Watching the two back-to-back is a highly rewarding endeavour, as they are so similarly stylised and organically connected, and it will be interesting to see if a third instalment, after almost a decade, can feel just as fluid.

A Game of Shadows was fast-tracked by Warner (ditching their Lobo adaptation in the process), who clearly wanted to turn this into an ongoing franchise, something which was perhaps at least deferred by Downey Jr.'s dominant presence as Iron Man in the MCU run-up to Endgame. It continues the story of Sherlock's ultimate nemesis, Moriarty, introduced in the first film, and behind a potentially game-changing plan to instigate a World War.

Harris really is the saving grace in this

Although all of the pieces were put into place for a perfect - and potentially superior (Mark Strong was good in the first film, but Harris' Moriarty is a truly scary and formidable foe for Holmes here) - sequel, and A Game of Shadows gets off to a cracking start as we see the return of Rachel McAdams' devious operative, and would-be love-of-Sherlock's-life, Irene Adler, it's not long before Adler exits stage left, and the plot goes off piste for a gipsy-flavoured romp through the forest, bringing in Noomi Rapace (with a thanklessly underwritten role for her Hollywood debut post-Dragon Tattoo and pre-Prometheus) and blowing up lots of things in slow motion, spectacularly, but not really hitting home until the final act, or at least until Moriarty takes centre stage.

Harris really is the saving grace in this. The Chernobyl actor is on fabulously, deliciously sadistic form here, and his taunts of Holmes regarding what he plans to do to those close to him are palpably menacing (Peaky Blinders' Paul Anderson has the potential to be a solid adversary too, as the sniper Colonel Moran, famous from the books, but appears to have been largely sidelined and ultimately left inexplicably vacant come the end). The film almost makes good as it comes to a tremendous finale at those famous Falls, and Downey Jr. is once again at home in the role (with Law his perfect foil), but it's hard not to imagine it being a fair amount better with McAdams accompanying them for their journey across Europe and with a trifle more focus on its narrative between first blush and final cut when it comes to the hero and his toughest adversary, both of whom are easily the highlights of the entire production. Still, watched back-to-back with the first movie, these are tremendously entertaining and stylish modern Holmes adventures.

Sherlock Holmes: A Game of Shadows comes to UK 4K Ultra HD Blu-ray courtesy of Warner who deliver the same largely impressive 4K presentation for this Ultra HD Blu-ray release as they did on their near-day-and-date Stateside edition, basically matching up to the 4K release of the similarly stylised first film.

The original A Game of Shadows Blu-Ray presentation was a step up over that of its predecessor, despite the mere 2 years between them, however 4K largely evens the odds, rendering the two as very similar efforts indeed. As with the first film, this struggles to come across as demo material, mostly due to the heavily stylised efforts, but it's a very nice and very hard to fault presentation nonetheless, delivering some very nice detail, strong texturing and a fine balance between period warmth and sharp clarity, wielding DNR only insofar as is absolutely necessary to clean up but not scrub away detail.

The colour scheme is more expansive than the near-monochromatic tone of the first film, still enjoying the colder, bleaker winter forest locales, but also boasting some warmer highlights, and rich and decadent interiors, with the WCG and HDR - even without any Dolby Vision - working well to provide some significant dynamic range, strong peak whites and inky, solid blacks. There are some lovely, standout moments - the slo-mo forest sequence excellent - and it does a frequently excellent job with the material, even if it's still not enough to make for a demo disc.

As with the first film, Warner don't bother with any kind of 3D object-based immersive audio track, but that's no big deal because the existing DTS-HD Master Audio 5.1 track is a real winner, boasting more than enough immersion already, and the kind of LFE weighting that puts some modern Atmos tracks to shame (looking at you here, Disney).

It may not be Atmos, but it's excellent nonetheless

Dialogue is given clear prioritisation across the frontal array, even Downey's mumbled mutterings come across well, whilst the frenetic stylisation is backed up by another solid effort from Zimmer, who maintains pace with Ritchie's visuals and keeps things thematically on track. It's the effects that really impress though, even from early body blows and bombings to later shells being fired and heavy artillery cracked out (again, the forest chase is a standout), with some serious LFE weighting that will wake your system up. It may not be Atmos, but it's excellent nonetheless.
﻿

Again, as with the first film, Warner don't bother to lift a finger when it comes to the extras, not even porting them over to the 4K disc proper. Thankfully, they're still good enough to flip the Blu-ray on for.

Good enough to flip the Blu-ray on for

Another tremendously comprehensive all-in-one Maximum Movie Mode option delivers just about everything you want from the background into this production, and, along with a few further mini-Featurettes, it's a very good offering indeed.

Sherlock Holmes: A Game of Shadows makes for a tremendous companion-piece to the superior first outing, and whilst it might lose its way for the middle part of the narrative, it's bookended by an excellent first and last act, and a formidable nemesis for Downey Jr.'s Holmes in Harris' Moriarty. It would be great too see a third entry but you can also understand why, after this definitive confrontation, where would they go from here?

Watched back-to-back with the first movie, these are tremendously entertaining and stylish modern Holmes adventures

Warner's 4K releases of the two Ritchie Holmes outings are excellent companion pieces too, with A Game of Shadows afforded strong video and an LFE-demo audio track, even if it's not Atmos. Fans should consider picking up the reasonably priced twin pack.