"So now you're curious as to whether there's a larger game afoot?" 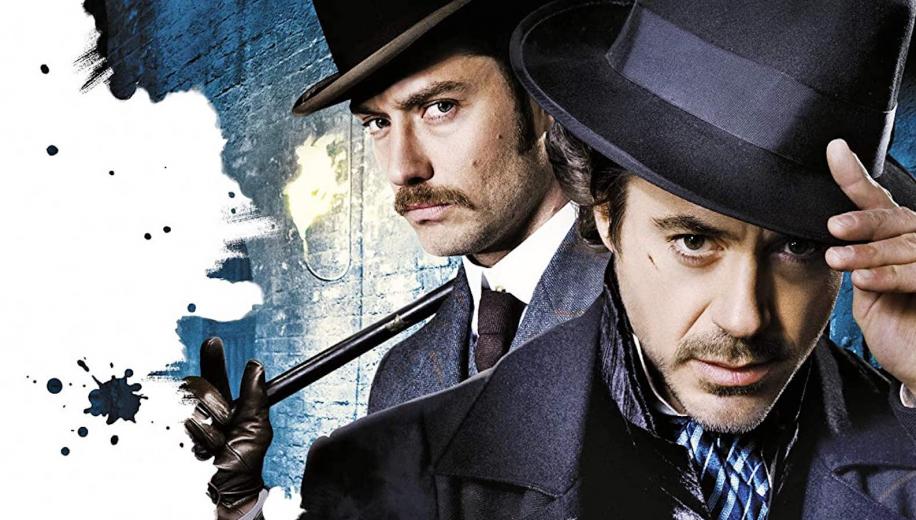 With a third movie in the pipeline for next year, and Iron Man a thing of the past, now seems like the perfect time to revisit Robert Downey Jr.'s excellent turn in Guy Ritchie's superbly stylish Sherlock Holmes.

Over the course of more than a decade, Robert Downey Jr. became indelibly linked to Tony Stark's Iron Man, and if Dolittle (and, perhaps, the upcoming Black Widow) is anything to go by, it'll be hard for him to ever escape that mould. It's unsurprising then that he would return to his only other franchise role; indeed the only surprise is that it's taken so long to get a second sequel, in this highly successful series, off the ground.

2009's Sherlock Holmes basically gave birth to every hyper-realised incarnation since, whether it be Elementary or the thematically similar Prodigal Son, or - most obviously - the frequently excellent Moffatt/Gattiss BBC series Sherlock, which somehow manages to be identical in frenetic style but completely different at the same time, not least thanks to the contemporary setting. Ritchie's pioneering entry showcased what a perfectly chosen actor and a perfectly chosen director coming together could do: create a blissfully manic bit of pure entertainment, sharp, witty, clever, stylish and just very, very enjoyable. It's hardly a masterpiece, but it was still a hell of a start to a modern reboot franchise.

A hell of a start to a modern reboot franchise

The story has Sherlock and Watson as established detectives, way ahead of the local cops, going toe to toe with a nefarious cultist who appears to be able to survive death, requiring all of Sherlock's formidable forensic skills to uncover the complex conspiracy.

Sherlock's a whole lot of fun, and actually pretty damn enjoyable back-to-back with the second film (more of that later, but it's released day and date with A Game of Shadows) in no small part thanks to the underlying Big Bad whose presence is felt in the first film, and who was clearly being anticipated as the overreaching villain in the franchise (Craig's Bond series could learn a lesson from this).

Downey Jr. is a perfect Sherlock, nervous, neurotic, arrogant and obnoxious, eccentric, sharp, witty and just brilliant. He's superbly cast opposite Jude Law, and enjoys a little tension with Rachel McAdams, and some nice moments opposite Mark Strong's distinctively-toothed villain. But it's Downey Jr. who carries the movie, whilst the character, and interpretation of the character, makes for just about the best use of Guy Ritchie's distinctive plot-puzzle stylisation (you know, where he jumps back and explains something really clever from a different point of view). Here it's implemented to get you into Sherlock's insane processing power beast of a brain, as he anticipates moves in fights, plans points of success, or even sneaks up for his first encounter with Moriarty. And it's fabulously flashy fun, just like the whole movie.

Sherlock Holmes comes to UK 4K Ultra HD Blu-ray courtesy of Warner who deliver the same largely impressive 4K presentation for this Ultra HD Blu-ray release as they did on their near-day-and-date Stateside edition.

Beneath the hood this is a pretty impressive upgrade

On its own terms, Sherlock Holmes is ostensibly a sporadically exceptional but more often perfunctory 4K release, without the kind of colour pop to make you wow with its HDR and WCG capabilities, and seemingly disinterested in razor-sharp focus in favour of a more suitable period gauze aesthetic. But you only have to pop in the decade-old VC-1 encoded Blu-ray to realise that this release is still a substantial upgrade, whilst also clearly in-line with the director's intention for the visual cadence of the piece.

When it's on point, the detail is excellent, like during the confrontation between Sherlock and his imprisoned nemesis, where every line, pore and light 5 o'clock shadowing comes to the fore. There's enough of this to leave you under no misapprehension about the quality of the presentation, indeed it's the stylistic proclivities of Ritchie that come to the fore, levelling a rich, period palette tweaked and desaturated and almost monochromatic. It's here too, where HDR and WCG suddenly become surprisingly important however, offering yet further delineation across the range of peak whites to inky blacks, the latter of which never buckle and lapse into crush, instead showcasing some tremendous depths and boundless shadow detail. Yes, on the face of it, it's hardly demo material, but beneath the hood this is a pretty impressive upgrade and very good 4K rendition.

Warner's soundtrack for Sherlock Holmes' 4K bow doesn't appear to have received any kind of major upgrade here - there's no object-based 3D audio on offer here, but as our own Steve Withers noted on the last podcast, some of the soundtracks adorning older Blu-ray releases are actually pretty spectacular, and Sherlock is just one example, boasting a hefty LFE weighting and a decent amount of immersion for but-a-lowly DTS-HD MA 5.1 track.

Dialogue is keenly prioritised across the front and centre channels, evenly disseminated with priority over the rest of the elements where necessary, lapping up Downey Jr.'s perfectly cadenced ramblings and mutterings, whilst Zimmer's largely - and pleasantly - atypical score provides perfect background to the energetic affair, giving it a theme and rolling up disparate elements ranging from tense thrills to utter whimsy into a wonderful musical reflection of the subject matter. Effects entertain several thumping rumbles, from Sherlock's 'silenced' pistol attempts, to punishing slo-mo body blows, to some surprisingly expansive set pieces that will have ships crashing down on your roof with LFE impact. People may yearn for an Atmos 'upgrade', but there's absolutely nothing wrong with this boisterous track.

Warner's 4K Blu-ray release of Sherlocks Holmes somewhat unsurprisingly comes bare bones, which is a pity but don't expect much in the way of a retrospective until a third film is actually committed to. In the meantime, thankfully, the accompanying Blu-ray contains all the old - excellent - extra features.

Remember the days of Maximum Movie Mode? Well it's a tradition that appears to have long been forgotten, but it provides one of the most immersive behind the scenes experiences you can get when it comes to movies, rolling Video Commentary, Interviews and Behind the Scenes footage into one tremendous package. Sherlock's MMM is one of the better ones, affording a complete look at the production, although we get a further half hour of mini-Featurettes and a short EPK to round out the disc.

Sherlock Holmes ﻿is often overlooked following the likes of BBC's Sherlock and the US's Elementary, and possibly overshadowed by Robert Downey Jr.'s more prolific turn as Tony Stark's Iron Man in the MCU, however it's great news that they are finally going to shoot a third movie as it's a worthy second franchise fiddle to add to his bow; a perfect fit for his trademark neurotic genius schtick. This opening entry was a hell of a Big Screen reboot to the much-beloved Sherlock universe, often underrated and supremely enjoyable.

Warner's UK 4K Ultra HD Blu-ray release of Sherlock Holmes appears to have no bells and whistles - neither of the Dolbys, Vision or Atmos, are present - but that doesn't preclude it from being a very strong upgrade nonetheless, besting the old VC-1 Blu-ray by some margin and lapping up Ritchie's highly stylised, near-monochromatic period palette with aplomb, whilst delivering the same excellent audio track that really didn't need any improvement. And zero extras on the 4K disc doesn't take into account the tremendous extras that adorn the Blu-ray. Fans who already have the Blu-ray might be scratching their heads over whether this is worth replacing their old disc with, but the 4K upgrade is sufficient enough, and the Sherlock 2-pack will undoubtedly be available for a reasonable price (Warner Bros. store already has it at £35) soon enough.