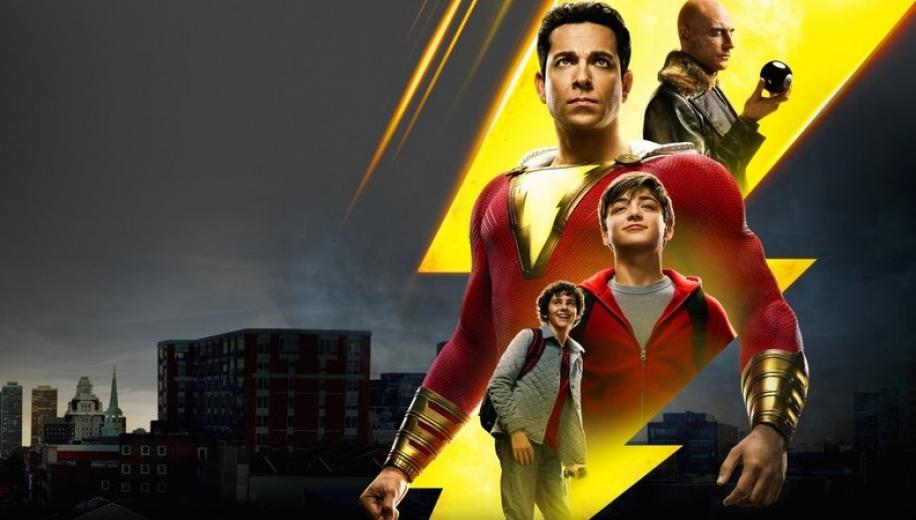 DC's best superhero movie in ages, Shazam! enjoys the warm heart and feel-good comedy factor of films like Big and even the genre-defining Superman.

While Marvel were sailing their MCU across the finish line with a tremendous trifecta of Phases, closing out a stunning 22 movie run with what is now the highest grossing movie of all time, DC were scrambling to repurpose their failed DCEU as a disparate group of potentially only loosely-related film franchises which would have to suddenly each stand on their own feet; inauspiciously ditching Cavill's Superman and Affleck's Batman, as well as perhaps even Flash and Cyborg (who?), whilst promoting sequels for their successful Wonder Woman and Aquaman films. It may be a while before we get another Justice League (or maybe they will finally come to their senses and reset the entire universe with Flashpoint), but that doesn't mean that DC is giving up on expanding out into their huge - and largely untapped, or utterly botched (Green Lantern) - roster of superheroes, seeking to offer a lighter edge, after Snyder's grittier, darker run, and investing in an unlikely but surprisingly inspired choice: Shazam!

The story has a powerful but ageing wizard named Shazam! lose control over the demons he's held in captivity for years, and seek out a new - and true - soul to wield his powers to fight them, finding an unlikely candidate in wayward foster kid Billy Batson, a teenager who largely doesn't have a clue what to do with the speed, strength and other super-powers he's been given, bumbling around with his foster-brother as if they've won the lottery, before the true evil emerges and he is forced to face the challenge he was created to face.


Shazam! really defies the odds of a bloated sub-genre, a flagging overarching DCEU, rampant familiarity, and a bloated finale, with a whole lot of very welcome heart

Slow-burning its set-up - almost as much time is spent establishing Mark Strong's origins as the dastardly villain of the piece, as Billy Batson's titular protagonist - Shazam! often plays out like a film from a different time, enjoying its good humour, lighter sensibilities and slapstick antics (the store robbery scene is great, as is the discovering super-powers montage), with Zachary Levi (who was actually in the background in both Thor sequels, but more obviously uses his Chuck talents here) on fabulous form as the goofy superhero, perfectly playing it for teenage kicks, replete with fumbling over women, trying to buy beer, and attempting to make money out of being a superhero.

It's a hefty first outing - hitting a couple of hours even without credits - but they cover a lot of ground, and it seldom drops the ball, affording plenty of foster family hijinks, school bully trauma, and, eventually, superhero spectacle to entertain. Fully self-aware, and somehow prepared to forget (or, at least, only frivolously follow) the rulebook when it comes to origin stories, Shazam! really defies the odds of a bloated sub-genre, a flagging overarching DCEU, rampant familiarity, and a bloated finale, with a whole lot of very welcome heart. Sure, it's nowhere near the greatness of classics like Donner's Superman, but it curiously gives you hope that such an inspired - and maybe even inspirational - Superman entry could still be forged two decades into the 21st Century, if they can pull off a Shazam! tale with such wide-eyed abandon.


It's a very nice presentation indeed, which may not be reference perfection, but looks frequently stunning nonetheless

A breath of fresh air in comparison to the Synder-styled landscape of more 'gritty' DC outings, Shazam! may not boast the visual opulence of Aquaman's underwater Tron: Legacy style environment, but it still enjoys a warmer palette where brighter superhero primaries can pop with verve. Detail between the upscaled 4K UHD rendition and its 1080p High Definition Blu-ray counterpart is only nominally increased, with a modest uptick visible mostly on textures (Shazam!'s outfit for one), but hardly a multiple of the existing resolution.

Instead, the presentation is ultimately, and unsurprisingly, reliant upon the format's additional tools to win you over, and distinguish itself head and shoulders above an already demo BD presentation, bringing not only WCG and HDR, but also Dolby Vision to bear, which afford a lovingly rich palette, replete with brighter peaks and deeper blacks, stunning shadow detail, and some wonderful pop on the almost neon chestplate, the lightning arcs, and all of the energy-based super-powers. The explosive 'Shazam!' moments are searingly bright, and most of the shots of the hero in-costume have some considerable demo worth to them when you take a minute to look at the intricately designed meshing of the weave, the golden yellow glow of the centre-plate and the bronzed metal sheen of the added trappings. It's a very nice presentation indeed, which may not be reference perfection, but looks frequently stunning nonetheless.

The aural accompaniment comes in the form of high definition object-based 3D immersive audio of the Dolby Atmos variety, and it brings with it the thunder. From the opening prologue right through to the grandstanding finale, there's plenty of boom for your buck here, and with keen prioritisation over all of the other key elements, it remains an excellent track.

As you would only expect, dialogue remains firmly prioritised across the frontal array, notwithstanding a few aural 'flashbacks' and echoing demon voices, getting clear and coherent dissemination throughout. The score, by Benjamin Wallfisch (who frequently works with Zimmer, as on Blade Runner 2049, and has scored all of director David F. Sandberg's films) does a solid job of balancing threat, comedy, heartache, action and just rousing superhero inspiration, and whilst it doesn't quite fully define Shazam's signature theme, it comes close.

It's the effects that define this track, however, with crackling lightning sparking out across your living room, to LFE-laced explosive effect, whilst gunshots hit home, and even the glowing centrepiece hums intensely upon closer inspection. It's a punchy track, afforded car crashes, mystical voyages, screeching subway cars, traffic pile-ups, and super-powers galore - particularly in its final act - but the LFE is laced throughout, keeping it a heady mix that's immersive and heavyweight. Excellent.

Nothing on the 4K disc, but the Blu-ray delivers Featurettes, Deleted Scenes, a Gag Reel and a Motion Comic

It curiously gives you hope that an inspired - and inspirational - Superman entry could still be forged two decades into the 21st Century, if they can pull off a Shazam! tale with such wide-eyed abandon

Wonder Woman gloriously drove female superheroes into the fore, Aquaman proved an audiovisual delight, but Shazam! has gone old school to possibly the best effect of any of DC's recent - and frequently flawed - efforts. Warner's superb UK 4K UHD Blu-ray release marries up to the preceding US package, with impressive Dolby Vision-enhanced 4K video and Dolby Atmos-enhanced audio, as well as a few additional extras. Even if you've given up on DC, this one is worth making an exception for.