Shaun Of The Dead DVD Review 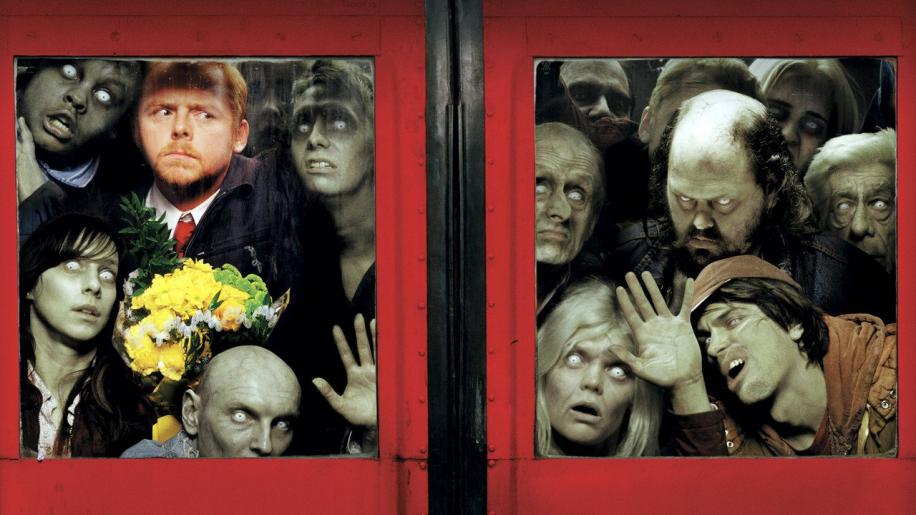 You know that ultra clean look that huge blockbusters have, Like Master and commander or Attack of the Clones? Well, Shaun of the Dead isn't like that, but is just as good for different reasons. At no point do you think Shaun of the Dead has been through anything as vulgar as picture processing. It looks real because of the (very) slight imperfections which perfectly fits the movie's feel. Fair enough, some in car shots are faintly blurred and the dark in pub setting is a bit too black on black. But really, this is a very fine picture indeed.

The sound can be very effective with dogs barking forlornly from the rear speakers and car alarms going unanswered. There is even a helicopter in the background as Shaun goes to sleep in the kitchen as a portent to the future. Deep LFE swells are used very well, especially during the third act such as the opening church bell. It is given artificial bass extension, but still sounds right in the context of the movie. Music is lifted straight from the John Carpenter School of synth bass melodies, another nod to a past horror master. A good and fitting soundtrack.

Right, the extras. Bear with me; we'll be here for some time.
The extras are just superb. Anyone who has watched Spaced, or listened to the commentaries on that series, knows Simon Pegg and Edgar Wright are fans of the DVD format. This shows as none of the extras are boring. Well, the photo gallery and First Draught Flip Chart aren't too good, but there is so much more content than that!

Commentaries are universally good, with Dylan Moran turning out to be a lot funnier than his role would lead you to believe. The Bill Nighy and Penelope Wilton commentary is sometimes a bit introspective, but is none the worse for it.
Simon Cam and Lucy Cam features provide genuinely interesting laugh out loud content. The interview with a zombie and Nick Frosts injection had me in tears. While Lucy's footage of zombie extras reading newspapers on someone's garden wall is plain surreal.Joes Diary is the story of how some zombie extras spent their time during the filming of Shaun of the Dead.

EPK featurette is a standard TV spot style documentary, but does succinctly explain the premise of the movie.

Outtakes are as funny as anything in the movie while never appearing too in-joke for the audience to understand. The outtakes certainly emphasise the camaraderie that the whole cast shared. Look at how Nick Frost and Simon Pegg play off each other. In the same vein, Extended scenes are less effective, but the commentaries on them make a dry extra into something more interesting.

2000AD Comic Stripis a complete reissue of the story ran in 2000AD. It describes an out of film sideplot that was not shown in the movie itself. The artwork is excellent and the style is used in the Plotholes extra, too. In Plotholes some more of the unexplained loose ends are wrapped up in a very stylish manner and commentated over by the actors.

First Draught Flip Chart is the brainstorming session that Edgar Wright and Simon Pegg developed as a blueprint for Shaun of the Dead. There is some worthwhile content in here, explaining why some ideas were dropped and how the plot may have went. This extra is a bit tedious and does drag on.

TV BitsIs a collection of full versions of TV programs that were made for Shaun of the Dead. These TV spots were shown on various TV's in the movie, with Jeremy Thompson's Sky News report being especially well done.

This is one of my favourite movies and best discs I have had for some time. Go out and buy it from the 6th of September