You’ve got red on you 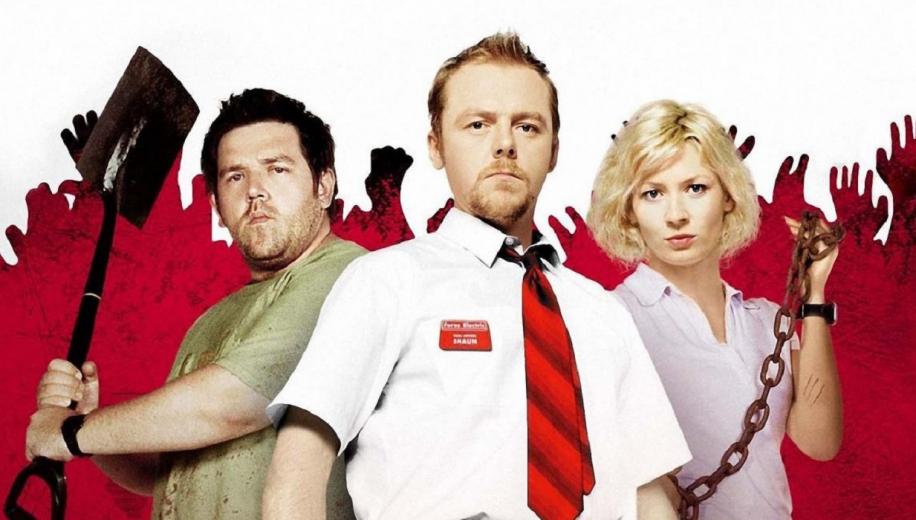 Shaun of the Dead Film Review

Showing the world how to combine horror and comedy, Shaun of the Dead, remains a classic, taking the very best of the genre but adding Pegg and Wright’s familiar twist.

When the TV show, Spaced (2001) finished it’s run, season 1, episode 3, had an opening montage that led directly to tonight’s feature; writer, Simon Pegg and director Edgar Wright (sadly missing writing partner Jessica Stephenson, which does actually show in the finished product) pitched the idea for a horror comedy – typically a very difficult genre to get correct – with the resulting feature becoming an instant critical and commercial success and paving the way, not only for the other two films in the ‘Cornetto Trilogy’, but also for their respective careers.

Boiled down, the plot is incredibly simple; faced with a zombie apocalypse, a recently dumped electronics salesman, along with his housemate, collect the ex-girlfriend, her two friends and his mum and stepdad and try to make it to a safe haven, the Winchester pub, in which to survive. Of course, nothing goes to plan and several mishaps later, the motley crew, barricaded in, have to fight for their very lives. A script that is, in fact, the basis for any number of zombie horror films. And it's played perfectly straight, taking its subject matter and characters very seriously, but squeezing out every drop of comedic elements and draping the whole with homages, references and straight lifts from titans of the horror genre.


Played straight, but squeezing out every drop of comedic elements and draping the whole with homages from titans of the horror genre

The characters are understandable, the plight, though fantastic on a grand scale, is relatable in the small, making the tensions within the group natural; it is packed with wit, charm and biting (!) satire, while remaining focused on its horror roots. The bond between the leads of Shaun and Ed is so full of natural chemistry that, even though Ed is a buffoon, you still side with Shaun with him; and this, as much as anything, allows the film to flourish. The climactic shoot out stands alongside any of the zombie horror greats in terms of tension and resolve. It also ends well and whilst the door is open for a sequel, our writers took the high road and went with an anthology trilogy; making the stand alone Shaun of the Dead a one of a kind.

Shaun of the Dead was shot using Arriflex cameras on 35mm film and finished as a 2K DI which has been used for this Ultra HD Blu-ray release. The disc presents an up-scaled 3840 x 2160p resolution image in the correct widescreen 2.35:1 aspect ratio, and uses 10-bit video depth, a Wide Colour Gamut (WCG), High Dynamic Range in the form of HDR10+, and is encoded using the HEVC (H.265) codec. We reviewed the Region free UK Ultra HD Blu-ray release of Shaun of the Dead on a Panasonic 65DX902B Ultra HD 4K TV with a Panasonic DMP-UB400 Ultra HD Blu-ray player.

On the whole a nice step up from the Blu-ray


A nice up-turn in detail is shown by keener skin texture and clothing weaves, sharper edges to mid-ground (trees, newspapers, car number plates etc.) and an all-round more positive attitude towards edges. The WCG and HDR really push the primaries, especially red, which has such dominance to the picture. The black level is very strong, adding decent depth to the frame, especially true in the Winchester at the climax, where shadow detail is excellent. The white end of the scale is, perhaps, even better, with highlights really pushing the image, the white of Shaun’s shirt, for example, showing no signs of clipping.

Digitally, there are no compression issues and the original source is clean with a pleasing level of grain still intact. On the whole, a nice step up from the Blu-ray.

The DTS:X surround track takes the effects to a new level, literally, with the overhead channels coming into their own towards the climax. Dialogue is clear, sounds very natural and given the priority it needs. The music, whether that is the score or the jukebox in the Winchester, makes full use of the speakers to give a strong sense of immersion. While ambience is taken up by the surround and overhead channels; take, for example, when Shaun is first walking to the shop on Z Day, the natural effects are perfect as you follow him, look at the escape when they first abandon the car, the sound of the car alarms going off is so authentically placed I found myself pausing the film to check it wasn’t outside.

But the zombies get the best mix; the cries coming from all around when the group are walking to the pub, then even more so when they break through the windows; gunshots, cries, breaking furniture all are expertly seen with the overhead channels really adding plenty. The pub cellar is enhanced even more with the fire and zombies thumping above you. Bass is strong and tight, with plenty of LF effects to keep the sub happy. Excellent track.

The first of the ‘Cornetto Trilogy’, Shaun of the Dead, still stands up today; taking the very best of the genre but adding Pegg and Wright’s familiar twist, both came from the TV show Spaced, with the opening of S1 Ep3, paving the way for this film. Loading the film with homages, spoofs and comedic moments, but above all treating the subject with respect, Shaun actually works as a horror film before you add the comedy to it. It is a class act and from its success, a legacy was born.


The first of the ‘Cornetto Trilogy’, Shaun of the Dead, still stands up today

As a 4K Blu-ray set, the package from Universal is pretty good, the up-scaled picture is detailed, well coloured with decent blacks and highlights, while the DTS:X surround is fully immersive with tremendous bass. The extras package is exactly the same as has been released before and indeed looks to be on the same disc.