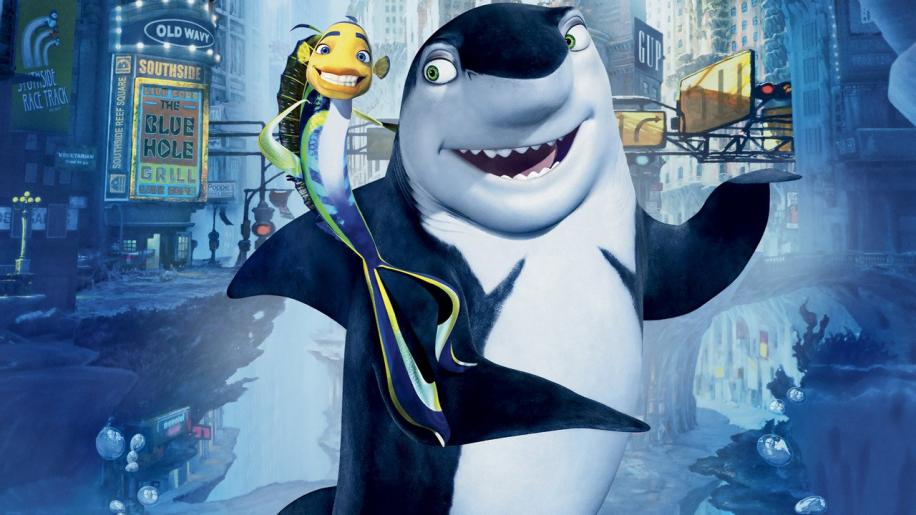 Now, here's a thing. If a movie is constructed entirely in a computer, how can the picture be anything less than perfect? Because the CGI isn't up to spec? Well, I can hardly criticise something for not using tech that hasn't been invented yet. Perhaps you can criticise the look, or feel of a model, whether they have used effective textures or lighting? I am hardly qualified to question such methods, which leaves me in something of a bind. The only thing that I can really criticise is whether the transfer is good or not, something at which studios are becoming very proficient in their more contemporary releases. As it stands Shark Tale, like Nemo or Monsters Inc., really does have a perfect picture. There is no noise, grain, colour anomalies or dirt on the print. It's all perfect. The only thing that spoils the picture is when chroma upsampling errors occur (during the titles), but that's not the fault of the disc.

So, unless someone can think of a whole new set of standards by which CGI animated movies can be judged, Shark Tale, and others, get a perfect 10. At first I thought Shark Tale's sound was crisp and clean, punchy and firm. As I listened it became apparent that this is because the sound is primarily locked to the front of the soundstage, where your best speakers (should) normally reside. More than that, the centre seems to be doing even more than it normally would, giving the sound a centre stacked presence. That's not to say that there isn't any surround action, because there is. But here the effects were a little bit off hand, like the sound mixer knows they're there, but doesn't think them important. Strangely the best use of surrounds is during the “humorous” end credits. There is a slight lack of sparkle, too, which makes the dialogue un-fatiguing (sans Oscar) but also removes bite that would otherwise be there. Musical queues are handled very well indeed, though, which is probably due to the front bias soundstage. A remix of Bob Marley's Three Little Birds is played very well, as is a re-jigged Jaws theme. Unskippable trailers. These must never become a part of DVD culture, especially as those present on this disc seem to go on for ever.

Directors commentary has all three directors talking in the same room. Normally this would be good, but all you get is the director's perspective. You don't have Scorsese talking about the differences between direction and action, or any of the ad-libs. You don't have animators talking of capturing the essence of the actor's script reading. Instead, what is given is detailed, but rather flat

Star Fish and A Fishified World both constitute a making of... featurette. It is interesting to look at the actors read through the lines and how some of their natural reactions made it into the movie. You also see how the amount of work that went into the central city stage made it so special.

Music of Shark Tale is fairly self explanatory, but Gigi The Whale isn't. This latter special feature is a marvellous thing. Clearly, one of the cast is reminiscing about some mob type character while reading lines. The conversation goes back and forth between him and the crew off camera, but the whole thing is animated within the world of Shark Tale. It's difficult to explain, but if you need any reference of really good animation, then this is it.

Club Oscar featurette is a series of Shark Tale style spoofs of famous musical videos, including MC Hammer's Don't Touch This with hammer head sharks. Whether or not you like the music, all the tracks are catchy and animated with verve. This feature is possibly aimed at the very young so that you can keep it on repeat while you are otherwise engaged.

These features are alright, though, like the movie they could have been better. A cast commentary would have been nice, as would some reading outtakes, for example. Terrible, and if it weren't for the above average sound and vision, that overall score would be less. At one point in the commentary, it is mentioned that Shark Tale was almost the animated version of LA Confidential and it shows. Some aspects of the script are clearly too adult for kids and vice- versa. Now sometimes this works, like in Danger Mouse or Finding Nemo, but in Shark Tale the different threads either don't mesh together or don't feel like they belong to the movie. More importantly, I hated this movie because I couldn't see the point of it. Like when Tombstone and Wyatt Earp were both released there was only room for one. Unfortunately Shark Tale is more Wyatt to Nemo's Tombstone.