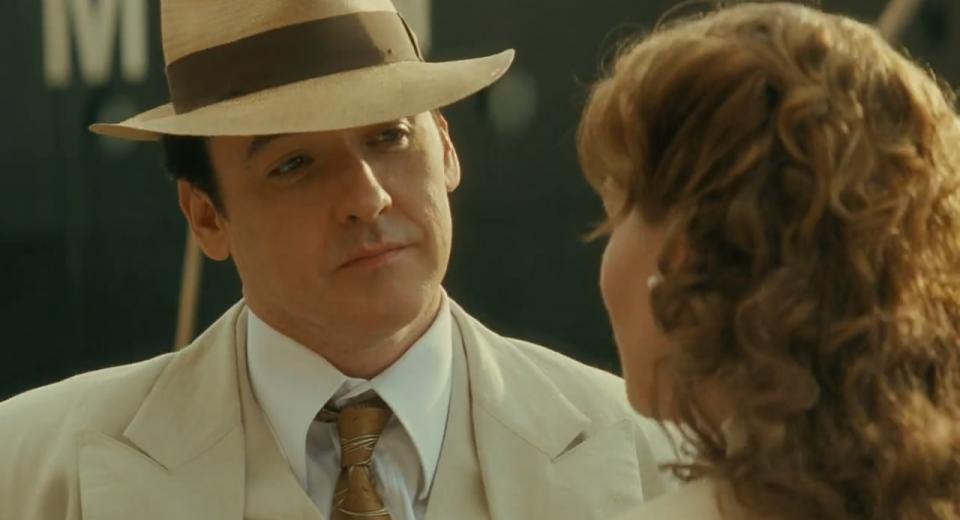 A strange tidbit of information I have to open the picture review. The movie was originally released at 2.39:1 aspect, but the Hong Kong release of the Blu-ray, reviewed here by my esteemed colleague, was in fact cropped to 1.78:1. Completely inexplicable. However, you'll be pleased to hear that the UK release comes in at its original 2.39:1. Given the movie's setting it's understandable and entirely forgivable that detail comes second to overall grading. Grading is heavy and leans heavily towards oranges and browns. Blacks have a crushed feel, and the shadow detail is not fantastic, largely due to the type of soft-focus employed over the whole image. This pretty much eliminates any traces of grain, but it's not a bad thing. The general soft-focus has meant that edges aren't as sharp as you might expect, and overall detail, though good, is far from reference. All that being said, it's pretty obvious that it was a deliberate artistic choice to take that approach, and it does work for the period feel. Some of the CG I found to be a little out of place, but it's not used for much more than establishing shots and vistas. It just didn't fit with the period style for me, though it certainly looks beautiful. Skin tones aren't exactly natural, and definitely look softer; another product of the artistic decisions on grading and period style. Overall, a very stylised, but decent offering. I was less impressed with the DTS-HD Master Audio 5.1 track than I had expected to be. I genuinely had to rewind several scenes to figure out what had been said, as the dialogue was particularly low in the mix. Atmospherics and ambiences were excellent and made great use of the surrounds, but seemed to be too heavy in the mix, often drowning the dialogue. This may sound a little harsh, but I actually found myself listening to the musical cues to give me an idea as to what may have just been said, and the tone in which it was said. That being said, the narration was deep and crystal clear, just the diegetic dialogue that was a bit of a problem. I tried this on two different systems, and though one was slightly better than the other, it's clear that the balancing of dialogue to sound and music is less than perfect. Gun shots had a raw and realistic snap to them and cut through brilliantly, and the use of dynamic range is good and varied, affording the loud sounds to have impact. However, this is at the cost of some of the lower amplitude sounds being a little lost. I found myself wanting to ride the volume a lot, to turn up the low volume sections, and to turn down the louder sections, which was annoying. All in all, only dialogue proved to be a slight problem, otherwise, a very clean audio presentation, with more than expected use of the surround array, and subtle use of the LFE channel. Sadly, this being a dialogue driven movie, I have to mark the audio down on the fact that it was difficult to hear at times. None to speak of bar some previews.

If the slow burning thriller/mystery is your thing, you're unlikely to be disappointed. The story is intriguing, if a little flawed at times. Character development is varied throughout, with some arcs simply disappearing, and others being intensely rich and emotive. The cast performances are excellent and really make you wonder how this movie seems to have fallen off the face of the earth until recently. A solid attempt at blending several genres of film that, although not perfect, is indeed worthy of applause. Shanghai is an overlooked period piece that if you can handle the pace and can see past the obvious Casablanca comparisons, is well worthy of your time.

The package itself is actually fairly meagre in offerings. With nothing at all in the way of extras, and minimal setup options that allow for subtitles on or off, and an audio presentation that whilst deep as far as ambiences and surround array goes, and punchy as far as LFE and explosive sound effects go, lacks the required clarity for a dialogue driven movie such as this.