"Welcome to the circus!" 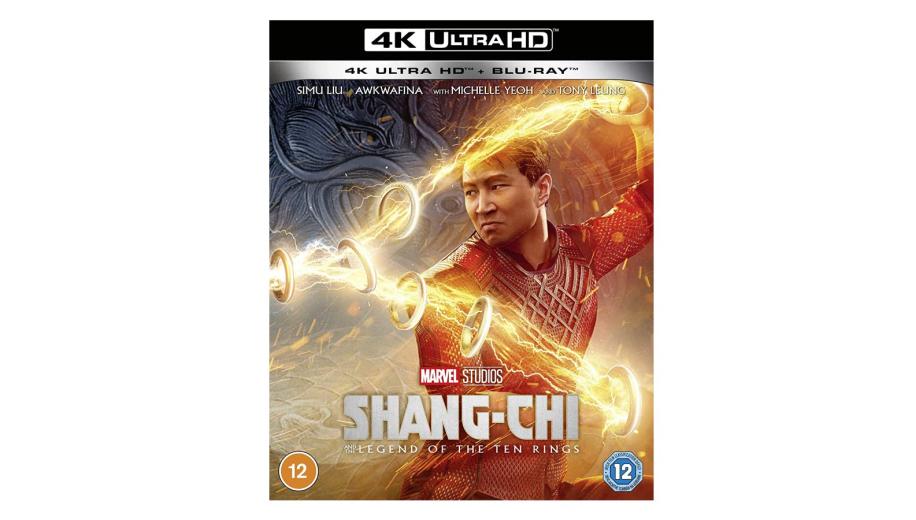 Shang-Chi and the Legend of the Ten Rings Review

Whilst Eternals flounders at the Big Screen, Marvel's ode to Wuxia, Shang-Chi, smashes down onto home formats, not only on 4K disc, but actually - arguably more impressively - in IMAX Enhanced 4KDV on Disney+.

Black Widow may have come a little late, a bit of an afterthought to the previous Endgame run of movies, and possibly not enough to really give this next phase any momentum, but the underdog contender Shang-Chi - despite its initial, middling, trailer - truly blows away any such concerns, introducing the first New Phase hero who you're going to want to sit up and pay attention to.

Beautifully fusing the poetic majesty of Wuxia classics like Crouching Tiger, Hidden Dragon, Hero and House of Flying Daggers, with Marvel's now-trademark zero-to-hero origin story formula, Shang-Chi is everything you could want from a new MCU entry, working the same magic as Black Panther, only for Chinese mythology and culture, taking you on a pop-culture-laden, meta ride, snap-up-to-date in terms of where we are post-Endgame, but also witty, fast and fresh, unencumbered by the past (at least outside of its own personal arcs) and prepared to launch us headlong into the next Phase proper.

... Shang-Chi is everything you could want from a new MCU entry

Simu Liu - leaving behind, but also paying tribute to, his Kim's Convenience origins - makes a hell of an impression as he goes from valet car parking to secret martial arts master in a flash, equal parts charming and focussed in the role, ably assisted by Awkwafina as his best friend, who makes every single WTF moment all the more fun with her wordspew reactions and motormouth wit. But of course, it's the heavyweight names that have the real presence, with Tony Leung a fabulous antagonist, finally doing justice to a character many Marvel fans felt was previously underserved (whilst also bringing back some hilarity courtesy of an excellent returning cameo), and Michelle Yeoh affording a nice nod to her own Crouching Tiger history, completing the Wuxia circle.

The action is tremendously spirited too, and whilst the more magical moments do remind you of Ang Lee's balletic fights staged on bending tree tops, the earlier fight sequences have the speed and ingenuity of golden era Jackie Chan and Donnie Yen, with an excellent bus battle setting that tone, and a side-of-the-building battle hammering it home. The way in which Marvel continues to expand its palette and absorb such diverse international flavours is impressive, yielding a fabulously fun entry which also helps give us an idea of how a new set of Avengers could actually take shape.

Shang-Chi and the Legend of the Ten Rings 4K Video

Shang-Chi and the Legend of the Ten Rings comes to UK 4K Ultra HD Blu-ray courtesy of Disney, in advance of the US 4K release for once, although curiously a few days after the debut of the title free on Disney+ and in IMAX Enhanced Aspect Ratio no less. This Ultra HD Blu-ray delivers a suitably impressive 2K upscale, but it can't help but suffer in comparison to the Dolby Vision IMAX Enhanced streaming counterpart, besting it in terms of bitrate for sure, but falling short with its lack of all the bells and whistles that the streaming channel affords instead.

... there will likely be a fair few out there who will strongly consider their next viewings of the Marvel movies (and perhaps even their first watch of Shang-Chi) to be courtesy of Disney+

Shang-Chi looks impressive as all hell. Shot entirely with IMAX cameras, it's really no surprise that detail is so impressive, affording precision and nuance, evident on the city streets and the training grounds, as well as the detailing on the costumes and finer tweaks to the powers on display. It's a stylish, grand scale MCU entry, despite its ostensible smaller scale vibe, and the 4K image lives up to all of that, ultimately arguably besting the streaming counterpart in terms of absolute finer detail and texture, eschewing that more digital feel to the streamed variation, but it's often hardly noticeable in reality, although the reasons for that are arguably more to do with other aspects of the two presentations.

HDR and WCG bring depth and vibrance to the piece too, most evident during the surges of mystical energy-based powers, rippling across the screen in glowing golden yellows or icy electric blues, whilst Shang's costume has a gorgeous iridescent quality to it. Black levels are rich and deep, and a smidge inkier than the streaming counterpart can afford. But that's really where the good news ends. And we could easily sign off by saying this is a very strong, almost demo 4K offering, that stands proudly alongside its other MCU brethren on the format, but that's only half of the story.

As noted, Shang-Chi was shot entirely with IMAX cameras, and its debut on Disney+ (both cleverly and perhaps foolishly - depending on your perspective - timed to precede the physical release) coincides with the streaming giant's launch of its new IMAX Enhanced Aspect Ratio option for over half of the MCU catalogue, ranging from the 'fake' IMAX open-matte Iron Man to the fully-IMAX-shot Infinity War and Endgame. And the taller framing really suits the scale of the piece, particularly as it builds to a suitably epic finale. The 1.90:1 scope is considerably more immersive than the 4K's 2.4:1, and the Dolby Vision enhancement is the icing on the cake, giving this an even more vibrant palette which - between that and the aspect ratio - basically rivals the physical disc. It's possible that one or the other would not be enough - certainly streaming 4KDV has never yet bested physical 4KHDR, but the larger screen real estate pushes it over the top, making for a certainly comparable and - for many - arguably better, more immersive, watch.

Obviously everybody would prefer a physical 1.90:1 4K Dolby Vision release, but now this new IMAX Enhanced Aspect Ratio has been launched on Disney + there's even less reason for them to put out physical versions (at least not for a good while, when they might be able to milk an expensive IMAX collection), and the reality is that a lot of fans, whether with projectors or standard 16:9 TVs, will prefer to watch the IMAX Enhanced version even if the physical version may provide a - technically - superior image. It's not wholly unlike the 4K Director's Cut of Doctor Sleep, which was only available digitally (and relegated to a second Blu-ray for the 4K release of the Theatrical Cut). It's the superior version of the film, immediately making the stellar physical release of the inferior version somewhat defunct. As much as fans have enjoyed collecting all of their Marvel titles on 4K disc, Disney has given them even less reason to maintain that habit, and there will likely be a fair few out there who will strongly consider their next viewings of the Marvel movies (and perhaps even their first watch of Shang-Chi) to be courtesy of Disney+.

Shang-Chi and the Legend of the Ten Rings 4K Audio

Shang-Chi's 4K Ultra HD Blu-ray goes for full-throttle 3D High Definition object-based immersive audio in the form of Dolby Atmos and provides possibly the real reason why fans will likely still pay the extra to own the disc over the streaming version (also Atmos).

... even if you're going to favour the IMAX presentation on Disney+, you'll have to contend with the fact that the disc's outstanding Atmos track is arguably better

Dialogue is keenly prioritised, given presence largely across the frontal array, but the sweeping and memorably soulful score - as well as some wonderfully innovative energy/magic-based effects - really close the deal. From the opening introduction of the wielder of the 10 Rings, deflecting arrows and ground-pounding his way across the landscape, the LFE channel is ready to tear a chasm in your living room, punishing in its intensity, and the film never lets up across a succession of thunderous setpieces. Indeed, there is definitely something missing when you listen to Disney+'s Atmos track, immediately requiring a hiking up of the volume and, even then, failing to quite deliver the same potent LFE-dominated intensity as the disc's track. So, even if you're going to favour the IMAX presentation on Disney+, you'll have to contend with the fact that the disc's outstanding Atmos track is arguably better.

Shang-Chi and the Legend of the Ten Rings 4K Extras

Disney's 4K release of Shang-Chi promotes precisely zero extras on the 4K disc itself, but includes a number of decent features on the accompanying Blu-ray Disc.

... a number of decent features

Despite the lacklustre response to Eternals, Shang-Chi makes a hell of an entrance on home formats, a flagship vehicle for the new Disney Plus IMAX Enhanced range, sure to cause plenty of ongoing debate about whether Disney are pushing us further toward adopting their streaming platform as the go-to for all things Marvel/Disney and simply give up on physical media.

... a good argument to leave the disc in its case

Disney's UK release of Shang-Chi is everything you would expect from it, with demo video and reference audio, as well as a nice selection of extras and, whilst its Atmos track blasts the streaming equivalent out of the water, the things missing from the disc are going to be the ones making customers think twice about picking up the disc, or just watching the title free as part of their Disney+ subscription, with the latter's new option to watch the film not only in Dolby Vision, but also IMAX Enhanced Aspect Ratio, a good argument to leave the disc in its case.

Shang-Chi and the Legend of the Ten Rings comes to 4K Ultra HD Blu-ray in 2.4:1 4K HDR and Dolby Atmos courtesy of Disney in the UK, released on 15th November 2021, and comes to Disney+ earlier, on 12th November 2021, in 4K Dolby Vision with Dolby Atmos, with the option to watch the entire movie in either 2.4:1 or their new IMAX Enhanced Aspect Ratio of 1.9:1.