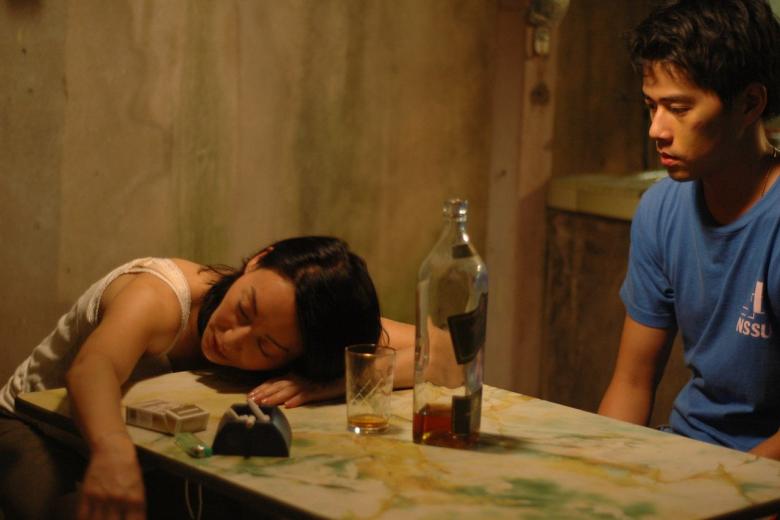 Tuck Chai is a 23 year old layabout who lives with his alcoholic single mother. He has a girlfriend, Ying, whom he met on the internet. She's not quite 16 years old, and they only ever meet up somewhat illicitly in a motel. Her rich parents expect her to have more direction in life, and get better grades, and when they find out about her sexual activity, they meet with Chai and his mother and threaten to have him charged with statutory rape if they don't pay them some money.
At the End of Daybreak is an honest look at the kind of thing that probably happens quite often around the world. Statutory rape is a dangerous area, as has been recognised in UK courts, where this story would probably have had a much happier ending. In the UK, there is a defence to statutory rape if you are under 24 and the girl in question is over 13. And that law exists for the very reason that is depicted in this movie. As it is we get a fairly bleak look at underprivileged, single parent children, counterpointed with the standard dig at rich kids and their nasty rich parents. Under-aged sex, teen pregnancy/abortion, bullying, alcoholic single mothers, boy racers and big secrets. This is basically Eastenders. In Malaysia.
There's only one trouble. This is what is says on the back cover:
“The film reconstructs a dark and complex emotional world behind a shocking crime taken from the tabloid headlines. (I've edited out the massive spoiler line that was here) Director Ho Yuhang's precise, offbeat, luminously shot images and stunning montages reveal underground passions suffused with tension in the dizzying moments before violence erupts. Chilling, stylish and disturbing, this tale of the illicit affair between a confused 23-year-old and an under-aged high school girl is a kind of modern Malaysian film noir.”
Chilling? Dark? Complex? A modern Malaysian film noir? Nope. This is a fairly nice, personal journey into an everyday kind of dilemma. Every TV soap across the ages has covered this sort of subject, even if this one is much more realistic when it comes to the conclusion. Perhaps it does have a serious subject matter and perhaps it does go down quiet a dour route, eventually, but it is still a fairly by-the-numbers drama, and it feels extremely drawn-out, despite the short ninety minute runtime. There were no stunning montages revealing underground passions suffused with tension as far as I could see, and I just had a desire to get to some kind of conclusion as I watched the characters flit around in their own, personal, confused delirium.
The film is infused with some sense of style - the Director using plenty of camera-in-the-face shots and abstract imagery to create a moderately artistic vision - but it's a hint of style and a hint of substance, not enough to make it worth your time. The only thing worth vaguely crediting was the opening shot, which seems a random act of barbarity, but comes full circle when you finish the film. And sure, the characters may be based in reality and the story may be convincing, but the actors bring very little to their roles, unless their job description was to do their best to make themselves thoroughly unlikeable. Insipid is the word of the day here. Tuck's mother, played by Kara Hui, is about the best character, in spite of her alcohol problems. She also provides just about the best performance. It's not that the others are bad, per se, just that they don't evoke any kind of emotion whatsoever. Perhaps you occasionally want to slap them, but you don't really care for any of them. Chui Tien You is (arguably suitably) apathetic as the lead Tuck Chai, his fractured upbringing leaving him with a predisposition towards railing against conformity. Ng Meng Hui may develop into a quality actress, but her 15 going on 35 under-age Ying is, rather oddly, totally devoid of emotion for the entirety of this piece. The threat of losing her boyfriend in amidst the mess that ensues after their affair is discovered, has absolutely no effect on her - and it makes no sense that she is so damn cold. It's a shame, perhaps the right cast could have turned around even this fairly mediocre story. Alas, it was simply not meant to be.
At the End of Daybreak was a bit of a disappointment really. And, honestly, it's not like I went into it with super-high expectations, but I did kind of get sucked in by the back cover and go into it hoping for a watchable, enjoyable Malaysian modern film noir, as was promised. A murder, a bit of intrigue, a bit of a mystery...is it that too much to wish for? Clearly, yes.