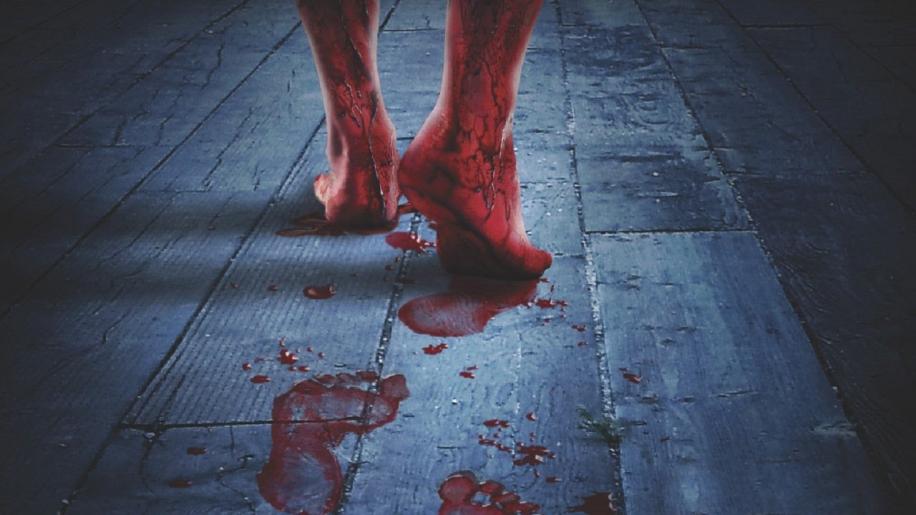 The disc has a theatrically correct 1.78:1 aspect anamorphically enhanced for widescreen TVs picture with an average bitrate of 4.73 Mbps. The overall picture is adequate at best, but I put this down purely and simply to the budget. It is pretty soft throughout though there is little loss of detail. The colours are also pretty flat there with contrast levels set so that the blacks tend toward the grey, giving the picture a washed out feel. Digitally there were no major compression problems, neither was there any edge enhancement, but with a picture this soft I didn't expect to see any, and finally a smattering of film grain here and there was seen. I did like the red spectrum they used as the many buckets of blood looked really good, and nice sickly blue/red the best part of the picture. Only one sound track to this film; English Dolby Digital and I'm afraid it was a missed opportunity. A rip roaring sound track can really elevate a horror film, and while this one has its moments I felt there were far too many areas where decent surround was not used to its fullest potential. The many scenes in the wood could have been improved so much by eerie surround effect, but there were none. In fact the rears really didn't have much of a workout at all being only used for a few effects (trucks) and score. However, it is not a bad track, everything is clear, some nice directional usage for the dialogue and what effects were used were done well. There were some nice rumbles too, but mostly everything sits happily in the midrange. It could have been so much more though, that and its lack of volume (some six volume points above my normal position) lead me to a rather poor mark. The main extra for the disc is an audio commentary with director Sheldon Wilson and cinematographer John Tarver. It is a sober affair with both men speaking at length about all aspects of low budget movie making, they hardly pause for breath. Much information is given in a frank and informative manor and you could learn how to make a movie by listening. Due to the length of the film rather than the information given the talk does become rather monotonous towards the latter end, perhaps better suited to two sittings to gain the best from it.

The only other extra on the disc is a 15 minute making of documentary which I must confess to being really quite good considering the length and process. Just about all the cast and crew have something positive to say about the experience there is plenty of behind the scenes film, stills and video footage, with hardly any padding from film footage. Impressive.

As a final note, there are three trailers for films I've never heard of start up before the beginning of the film, thankfully they can all be skipped. Shallow Ground is not the most original horror out there; in fact it borrows liberally from other film, yet still manages to maintain a sense of individuality. Flawed it might be, but in an age where studios cut all to gain that PG13 rating to maximise profits it is awesome to see independents out there willing to throw gore at the screen and make a profit, there is an audience for it! As a DVD there is little to get too excited about, the print and sound are adequate but like the film could have been so much more, and with so few extras it might struggle to find a home.