Shadows of the Damned PS3 Review

An interesting journey through the depths of hell 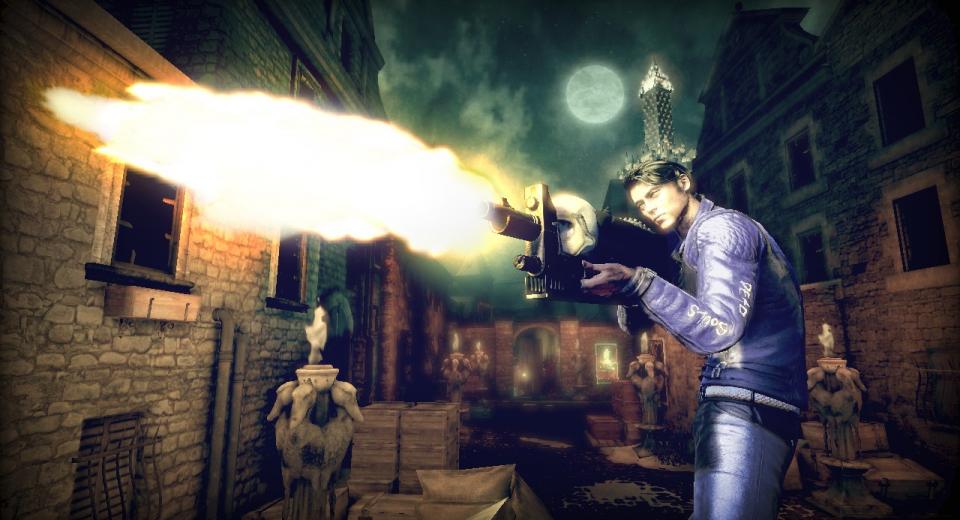 It’s good to see more and more games coming to our shelves that would once have been resigned to no more than an exclusively Eastern release. Niche Japanese titles haven't fared badly in the Western market in recent times, with games such as Earth Defence Force 2017, Eternal Sonata and Deathsmiles gaining a solid following alongside critical acclaim. It seems that EA are trying to tap into this success too by providing us with this latest J-adventure through Shadows of the Damned.


SotD developer, Grasshopper Manufacture, has had its own successes over the years by producing titles such as the original Flower and No More Heroes. However to some, these games were left un-played and they missed out on some of the unsung experiences out there during the past few years. With EA’s backing though, Grasshopper can surely produce a title that gives the player an entertaining experience. So will their latest title be damned to sit in the shadows of the triple-A titles surrounding it?


Before I get into the full swing of things and dissect SotD, I need to make one thing clear; this game may not be for you. I know this sounds like a weird thing to say in a review, but unless you enjoy childish sexual innuendo and penis jokes, then save your money. There are more genital references throughout the game than a sex clinic pamphlet. Even the weapons can’t escape innuendo, take the ‘Boner’ and ‘Hot Boner’ for example.


But, before the words ‘Duke’ and ‘Nukem’ cross your mind, I can safely assure you that this title implements humour much better. You will actually find yourself laughing at some of the innuendos that get thrown about and you’ll love the banter between titular character Garcia ‘F-Bomb’ Hotspur and his floating, bony friend Johnson. The duo constantly bounce off one another throughout their travels in terms of script and delivery so none of the dialogue ever feels contrived, it is always timed to perfection.


Garcia and Johnson find themselves charging head first into the depths of hell after Garcia’s other half, Paula, is taken without his consent by the lord of demons himself, Flemming. This formula is quickly becoming a cliché and follows in a similar ilk to Dante’s Inferno and God of War in terms of story, but the game is hard to recommend to a specific audience as there are pieces of many popular titles and franchises throughout.


Sadly in places, the game can be ugly in terms of the surrounding environments; textures are slow to pop up and when they do appear they are often made up of mundane colours and details. Where the game steps up though is in terms of its screenplay and sound, and there’s a specific reason for this and that is the people who worked on the title. The names Shinja Mikami and Akira Yamaoka probably won’t mean that much to some of you if you don’t enjoy your action thrillers, but they worked on Resident Evil (Director) and Silent Hill (Audio Director) respectively. Now if they don’t know how to make a successfully gory title then I don’t know who will.


Despite having a simple control scheme that has become predictable today, the game always feels fresh as it rejuvenates old concepts. Most of the buttons are mapped to actions that you will immediately feel at home with, but that helps the game have a pick-up-and-play feel to it. Much of the gameplay takes place in a linear fashion, you’ll move through given environments that soon fill with various demons (each requiring a different strategy to eliminate) and then you move on to the next until you reach the end of chapter boss.


The imaginative and creative ideas throughout Shadows never become boring and they always bring the game to life in one way or another . There are sequences whereby you must fight off darkness, which damages your health, by shooting light at a distressed goat head. Stupid idea yes but it works, given that the entire game mocks itself constantly then you become accustomed to partaking in what are quite frankly ridiculous mechanics. You’ll always know when the game has saved too, given that it is signified by a floating eye doing a flaming turd on the ground before buggering off.


There’s little exploration to the game, but what you can do breaks up the dry areas. Posters are periodically examinable, shedding light on demon life and you can find children’s novels ready to read which sometimes take a spin on real life stories. You can also search hidden areas, I say hidden; I mean a path that slightly branches off from your main path, so it would be pretty hard to miss secret areas. Within these, are often red and white gems which upgrade your health and weapons or can be used to purchase ammo and health boosts respectively.


As you may have gathered by now, everything is over the top and dramatic within SotD, which adds to its quirky charm. Mutilating enemies is truly visceral in a Dead Space sort of way, and the weapons you get to play with pack a punch too. The number of weapons is lacking, with a measly three to account for in the form of a pistol, machine gun and a shotgun. They do get upgraded though upon killing big bosses and once upgraded, they increase in size and acquire more features.


There are a few gripes with the control scheme, especially when things get a bit hectic on screen. If you deplete all your ammo for one gun, swapping to another can be quite cumbersome and annoying when you’re left firing blanks out of your current weapon, as opposed to letting all hell loose with another. The running mechanic is similarly annoying with Hotspur having a very limited sprint feature and when you want to dodge an incoming attack, don’t be surprised if he actually dives into the attack.


With three difficulty modes, you may find yourself coming back to the game as playing on the higher modes will not unlock the lower trophies annoyingly. But apart from this, there’s little reason to replay the game given that there’s no multiplayer mode or any form of arcade feature. So unless you completely fall in love with Hotspur, his swears and innuendos, then you may play this 8 hour or so offering and find it has nothing left to give.


Despite its flaws, there’s a much better game underneath dying to break free from the chains that are holding it back. Maybe I’ve been a bit naïve these past few months, but it seems that new IP’s and low budget games are making a name for themselves more than ever and actually providing an entertaining experience. Give it a whirl but don’t expect anything back in return when the campaign is over.

Saviour of the Underworld

Damned to Hell for Eternity

Shadows of the Damned PS3 Review

At a time where quality games are hard to come by and many classics get rolled out, ensure that you play Shadows of the Damned before the pre-Christmas rush. Despite having infuriating mechanics and horrible controls at times, SotD makes up for its shortcomings through its humour and quirky portrayal of hell. All in all a surprisingly entertaining package from some big names in the industry.