"These females are the last of their kind. When they die, this sub-species of Rhino, which has roamed the planet for millions of years, will be wiped out forever." 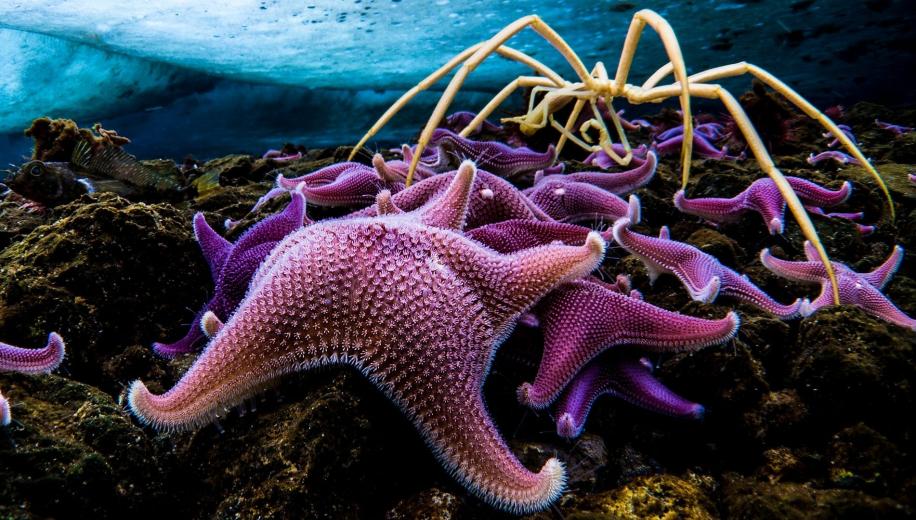 The BBC and the legendary Sir David Attenborough give us yet another must-see, jaw-dropping, eye-opening and ultimately heartbreaking look at our planet.

Around five years in the making, across 41 countries, Attenborough's latest is yet another compelling study of wild and wonderful species - some endangered, some largely unseen by human eyes - and stretches of our world which are so magnificent, and so unusual, that they almost look like alien landscapes. Painstakingly charting the formation of the world as we know it, he explains the single supercontinent - Pangaea - which split to form the seven continents we now know, before taking us through each individual one to marvel at their unique properties and colourful species.

Starting in Antarctica, the series is at its best when revealing the secrets of these amazing locations, the jaw-dropping vistas and wonderful creatures that live there - as well as setting the scene with facts about how the continents were formed and even discovered, which in the case of Antarctica, was relatively recently. The freezing conditions and desperate fight for survival leave key sequences gripping, and the first episode culminates with a wondrous look beneath the surface at the stunning underwater ecosystem that exists there. The extremes of Asia are also quite surprising - from the Arctic to the equator - whilst the South American rainforest is rich with colourful and dangerous species, as well as mile-high waterfalls. Australia's background is also interesting - exiled since the time of dinosaurs - and the myriad unusual creatures there, with their tactics for surviving the dry deserts, also bedazzle, whilst Europe takes a broader look at the impact of mankind on the wildlife and their ever-changing landscape - an aspect hitherto left to bookend each piece for a sobering look at what we are doing to our own planet. North America's seasons come into play, and Africa proves a fitting conclusion to the series, once again rounded out by a return to look at the plight of a species already covered for extinction earlier in the run - the rhino.


Perfectly blends educational elements, entertainment and a wake-up call to the damage we are doing to our own planet

The award-winning BBC Natural History Unit has done another fabulous job putting together this stunning documentary, which perfectly blends educational elements, entertainment - there's no denying the emotional impact of watching mothers try to keep their young warm in freezing conditions, or the tension of watching prey outrun their attacking predators - and a wake-up call as to the damage we are doing to our own planet.

Attenborough painstakingly, and heartbreakingly, adds just enough tragedy to each piece, reminding us of the damage done by hunting, pollution, or decimation of the rainforest, but also giving us a glimmer of hope through the good that organisations are doing in order to halt the potential extinction that some sub-species are facing. It's not a perfect series - several hours looking at nature can get repetitive in terms of multiple different penguins, seals and monkeys, or even wildcats - but there's always another wonder around the corner, and it's certainly some of the best documentary filmmaking on the planet.


Seven Worlds, One Planet hits UK 4K Ultra HD Blu-ray a whopping three months in advance of its US bow, boasting a jaw-droppingly spectacular full-fat native 4K video presentation which comfortably bests even the best the BBC's 4K can offer.


This is visual opulence at its absolute pinnacle

If you want sheer reference material, it simply doesn't get any better than this. The gorgeous, almost alien, landscapes; the wondrous wildlife, the stunning sunsets - this is visual opulence at its absolute pinnacle, a documentary which looks like it was made by the same people who put together the distractingly sumptuous Apple TV+ screensavers.

Detail is fabulous, shooting wildlife with staggering clarity that brings the unique tones, textures and fur to life. Sure, it's nature photography, so not every shot is perfect, but you can tell that a lot of effort has been put into this - less than 7 hours of footage culled from 1700+ days of filming - and the whole is most certainly as close to perfection as you're ever going to get.

The colour scheme is stunningly realised, with each episode bringing forth another wonder to explore - the ice in Antarctica looks so unreal you'd be forgiven for thinking it was CG; the underwater life beams with iridescent tones that best anything found on land - however harsh or extreme the environments, there's beauty to be found, and the colours pop with joyous intensity, cast against a rich black backdrop. HDR and WCG will help deliver some of the most amazing sunrises and sunsets you will ever see, and cap off a tremendous visual package.

The Dolby Atmos track is suitably spectacular
The accompanying Dolby Atmos track is also suitably spectacular, not least thanks to Hans Zimmer's soaring score, which gives the production the majesty it rightly deserves. Attenborough's distinctive vocals provide narration that dominates the production, whilst the wildlife and vistas are brought to life with verve and attention to detail - you'll feel the icy cold storms that rage for months in the Antarctic, as well as the heartbeat footfall of wildcats chasing their prey across the African plains. Bursts of environmental activity give the LFE some say in the matter - the volcanoes are pretty spectacularly angry - but it's really that Zimmer score (with some Sia participation) that underpins the weight of this series and rounds out a tremendous track.

A few behind the scenes Featurettes make it to the 4K disc itself, as well as a Photo Gallery


Some of the best documentary filmmaking on the planet
Seven Worlds, One Planet is another fabulous documentary series from David Attenborough and the BBC Natural History Unit, landing on UK 4K Blu-ray with absolutely stunning reference and demo video, a great Atmos track, and a few nice extras. Add it to your Christmas wish list.