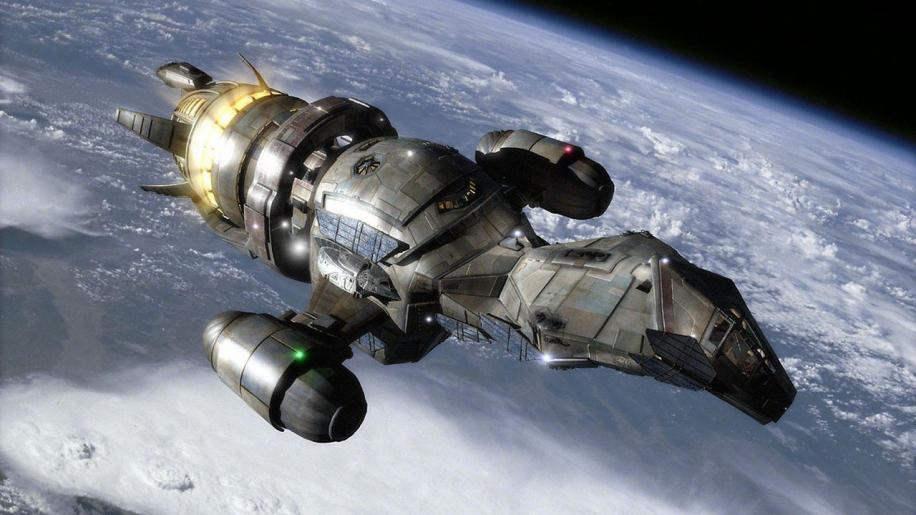 Serenity is presented in a broad, glossy 2.35:1 aspect ratio anamorphically enhanced widescreen transfer that helps it make the transition from small to big screen. Detail is excellent throughout, with no noticeable softness, little edge enhancement and negligible grain (even during the bleached-out Miranda sequence). The colour schemes are broad, mainly thanks to the different worlds that they visit and blacks are solid throughout, although the reds do bleed a little during the red alert scene. The transfer also exhibits no print defects. Overall it is a superb effort, never betraying its limited budget and being far superior in terms of quality to its small screen companion show.

Serenity only has a Dolby Digital 5.1 track (No DTS!) but it still sounds superb. Dialogue is ever clear, predominantly from the frontal array, compensating for a broad range of speech levels: from whispers to screams (but towards the end some of the mumbles are slightly overshadowed). The effects are fairly plentiful, with ambient sounds like humming engines and bleeping computer systems as well observed as the louder explosions and fire fights are powerful. The rears get a significant amount of action from these effects (particularly during the rain sequence) but they also see the punchy and dramatic score come through (although admittedly it is quite frontally orientated). There is also a little bass thrown in, both the grumbling rumbling kind and also some thumping thundering moments. Overall it is a superior Dolby Digital 5.1 effort.

First up, we get an Audio Commentary by the Writer and Director of Serenity, Joss Whedon. As I had experienced already from listening to him on the Firefly series commentaries, he is an extremely good commentator, often knowing exactly what to give his listeners - just the right amount of technical detail, background into actors, characters and plots and general anecdotes about the production. He discusses the difficulties he found in both keeping the fans happy and making things understandable for newcomers, talks about the technical shots - from the long continuous post-credits take to the effects shots and how they accomplished some of the harder sequences, frequently takes time out to praise the actors (Nathan's improvisations, like his 'faster would be better' line and the fact that Summer Glau did all of her own stunts) and defines the characters in more depth. He also talks about the re-shoots they had to do and the scenes they had to add in light of the test screenings. It is a solid commentary from the master behind this great franchise and fans will find him most entertaining, in his own inimitably sarcastic way.

There are nine Deleted Scenes, totalling about fourteen minutes of extra footage, all with the option to have commentary by Joss Whedon on why they were removed. Some of them were extended versions cut short, some were removed because he wanted to finish on a different sentiment and some were edited down and inserted into a different part of the proceedings in order to keep the right flow going throughout the movie. There's more Mal, more from his crew (including some excellent moments with Jayne and Kaylee) and more from the lovely, if quaint, River. Mal and Inara dwell, worlds apart, over their feelings, there are some pre-effects sequences where the ships are not fully rendered, more sequences with the superior assassin and basically lots of extra bits which explain the plot more fully, but in a way that was unnecessary given that you could largely figure it all out in the end. None of them really needed to be left in there (although there is a moment which could have worked in the main film, where Mal and Inara trick some guards in quite an entertaining way) but it is great to have them accessible here for fans of the show and the movie to get even more of their favourite characters.

The six minutes of Outtakes are pretty good, mostly consisting of prop mistakes and fluffed lines but there are a couple of genuinely great moments, including Mal and River mock-fighting over control of the ship and everybody arguing over who flies the ship. This is well worth watching and probably contains more swearing than in the entire main feature.

Future History: The Story of Earth That Was is a four-minute Featurette looking at the story that Whedon came up with as the backdrop to Firefly and Serenity, which was largely based on the battle of Gettysburg and had lots of references to the Millenium Falcon and its crew. He talks about the fact that the major two powers that were left were America and China, which is why everybody speaks both languages fluently. We get clips not only from the movie but also from the relevant episodes in the series and this is an interesting, if brief, addition.

What's In A Firefly? is a seven-minute look at the hover-jet sequence, some of the ship manoeuvres and the closing set-piece, with interviews from Joss Whedon and some of the other crew members, clips of behind the scenes footage, shots of their pre-visualised computer-animated test images and a little of the final film thrown in. We even get a few effects-comparison shots thrown in to see how much work had to be done to get the end result. Oddly for this Featurette, all of the swear words have been bleeped out (unlike in the outtakes), but this is still quite an interesting little Featurette.

Re-Lighting The Firefly is a ten-minute look at bringing the show back to life on the big screen after it was cancelled. We get interview with Whedon, discussing how he told his cast that he would not rest until he found them 'another home' and reactions from the various cast members in light of the show being pulled. All of the main cast members are on board for this Featurette, talking about how they were not surprised when it got cancelled but were shocked (and overjoyed) when it was resurrected for a cinematic outing and especially surprised by the power of the fans who rallied around to have it resurrected. There are a few too many clips from the final film, but it worth sitting through them just to hear from all the performers you love from the show, off-screen.

Finally there is a Joss Whedon Introduction that runs at four minutes in length and has him explain how Serenity came to the Big Screen after the cancellation of the original series. It was originally intended to be shown at a Comic Convention prior to a test screening, so it sounds a little inappropriate here, but it is nice to hear how much passion went in to bringing a dead show back to life.

There is also an Easter Egg, which you find by continuously pressing the left arrow on your control when you are on the main menu, until it highlights the centre icon on the right hand side of the screen. Selecting this will take you to a two-minute Featurette on the futuristic commercial that was used in the movie, with a brief introduction by Whedon and the full version of the commercial used.

Serenity is a superb, must-see movie. It is presented with a solid transfer and a decent audio track, along with a wealth of extras that will keep you entertained for quite some time. Fans of anything Joss Whedon has done in the past (Buffy, Angel etc.) will probably have already see in, but if you haven't encountered anything in the Serenity universe before, I strongly recommend picking up the series first and then the movie, believe me, you won't be disappointed. Complete newcomers to Whedon's work can take my advice and at least rent some of it, or can just jump straight in and see Serenity, it is an accomplished vision.