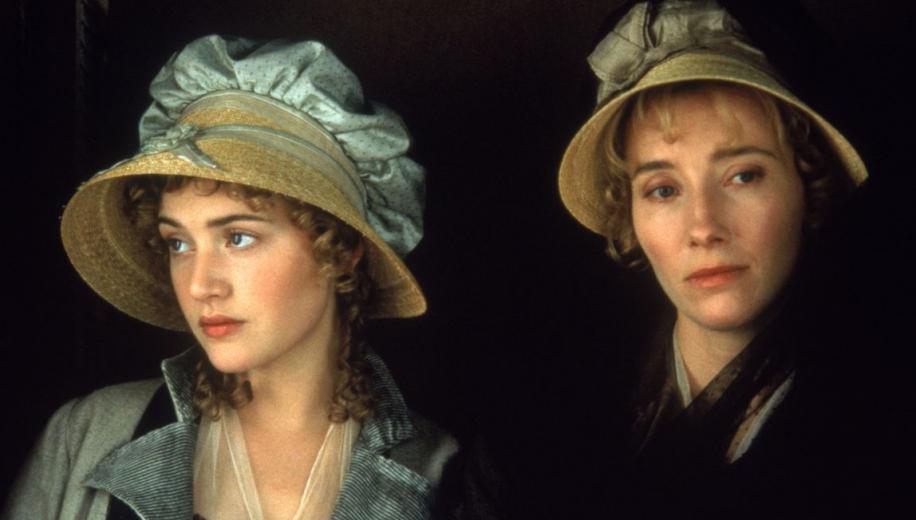 She'll be wet through when she returns

It’s interesting to think that author Jane Austen, whose celebrated novels critique wealthy, aristocratic lifestyles, was in fact from a modest background and relied upon imagination rather than first-hand knowledge of her subject matter, but she still managed to capture a point in time, telling realistic and pointed tales and all from the point of view of her station, a woman.

Of course, tonight’s feature, owes more to Emma Thompson’s Academy Award winning screenplay that it does to the original prose, by seeking to focus the story on the Dashwood sisters, their relationship and plight, and in doing to becomes relevant, pointed, and unforgettable.

At a time when a young lady’s only way in life is to marry and be a mother, finding the correct suiter is everything, and marrying outside of one's circumstance is not only frowned upon but downright impossible.  Thus, with a sudden loss in wealth, due to the early and tragic death of her husband with the inheritance, by virtue of law, going to the first born son of his first marriage, Mrs. Dashwood and her three daughters find themselves impoverished with the likely outlook for society and advancement vanishing at the same stroke. So starts Sense and Sensibility whereby the elder daughters, Elinor and Marianne, whose privileged lives suddenly come crashing down, discover finding love need not be a matter of status, but it is status that can define a life.

The story, fresh and new in 1811, is the stuff of every Rom Com ever since. Where Thompson’s script and Ang Lee’s direction excel is by updating the narrative to make is more relevant to modern audiences but keeping the period drama alive. Whilst many of us will never have servants, or be at the whim of a wealthy gentleman, or be shunned by society due to circumstance, it is possible to become swept up in the world as presented. The actions of the characters are understandable, their motivations and consequences relatable, and thus the decision making within reason, even if impossible to be a part of.

The shifting of focus onto Elinor (pragmatic and reserved) and Marianne’s (effervescent and soulful) relationship; the definable Sense and Sensibility of the title; while events unfold around them gives the audience an anchor to view the misgiving, misadventures, and misogyny that high society had in the 19th century. Indeed, it is their relationship that is the heart of the film, and they have two scenes together that even broke this jaded reviewer’s heart, both times with Thompson (as Elinor) absolutely deserving her Oscar for Best Actress - “Don’t leave me alone” being the most powerful line in the film. There is some measure in the conclusion as well, after the turmoil of their lives both sisters manage to settle very nicely.

The film is packed to the rafters with acting talent, and everyone acquits themselves magnificently. This is especially true of the male leads; Hugh Grant plays, well, Hugh Grant in a character that was written for Hugh Grant, but the wonderful Alan Rickman simply excels, in a character who doesn’t really have much in the way of screen time, but manages to convey such heart and heartbreak is just pure class.

The film is rightly deemed a classic, it is multi-award winning and richly deserving, and never fails to entertain.

Sense and Sensibility was shot on 35mm film and has benefitted from a 2021 4K rescan and clean up from the original camera negative, producing a 4K DI from which it appears this UHD is sourced.

The new scan has really brought out the best of the image. Detail is superb, from wrinkles and pores, and tear stained cheeks, in skin texture, to clear clothing weaves in the grand costumes; from ornate wall coverings (portraits, paper, wood) to soot from candles, from wonderful landscape shots of trees against the skyline to the petals of daisies in grass meadows; you can almost read the parchments! Excellent.

The WCG and HDR really add depth to the colours, all outside areas are exquisite, particularly grassland, where the greens are beautiful and change in hue depending on the time of day; evening are warm, dawns are cool. The richness of the reds within the houses, or regimental uniforms, the bathing blues of the sky.

Black levels are wonderful; the many shots of interiors at night, lit only by candlelight, showcase excellent shadow detail and reach far beyond that of SD, while the white scale never bursts, with clouds, linin and other highlights pushing the image out.

Digitally there are no compression issues, the original source is pristine with a very nice sheen of grain. I feel compelled to mention that during the opening credits the image does look a tad grainy and ‘thick’, an artefact inherent in the overlay, but once the film starts proper it cleans up to magnificence.

The Dolby Atmos track is amazingly immersive, for a film that relies on dialogue more than anything else.

The slight reverb when dialogue is in near empty rooms, of the room filling chatter of a ballroom, the wide-open expanse of the fields and meadows with the wildlife and weather are all used to impressive effect, widening the surround field to something very natural. The surrounds are used to fill out the ambience, and the overheads get in on the action with some effects that had me grinning – such as when Margaret is in her treehouse, those on the ground have their speech coming form the front, while hers is from up on high. The various downpours, with rain falling all around as thunder starts out above and then moves around the room, while the dialogue is central. Layering is perfectly done.

Bass is obviously limited, due to the nature of the film, however, horse hooves, carriage travels and thunder do elicit some decent response from the sub. Dialogue itself is clear, precise, very natural sounding and given all the directionality it needs. While the score too, makes good use of the surround environment. Extremely effective track.

There are no extras on the UHD, all are on the included Blu-ray, which we have, unfortunately, not seen, the list below is from published material.

A Sense of Character Featurette

Locating the World of Sense and Sensibility Featurette

Elegance & Simplicity: The Wardrobe of Sense and Sensibility Featurette

Hardback Book – Housing all discs with writings, essays and restoration note on all films.

Sense and Sensibility is rightly viewed as a classic, it is multi-award winning and richly deserving. The story of impoverished sisters who need to make their way in the world by finding the correct suiter is the stuff of a thousand Rom Coms, in keeping with the period, but updating the motivations and refocusing the story on the sister’s relationship, the film is charming. Add to that a multi-talented cast, a gorgeous look and a sumptuous narrative, you have a winner, pure and simple.

Sense and Sensibility is currently only available as part of the Columbia Classics Collection Volume II. The newly scanned native 4K image is a triumph, with sharp detail, rich colouring, and dynamic blacks. The Dolby Atmos surround track is amazingly immersive, with great effects while keeping the dialogue pitch perfect. There are plenty of extra features mostly archive but with some new, as well as the set itself and the packaging. Unmissable.