It's time to get your groove on 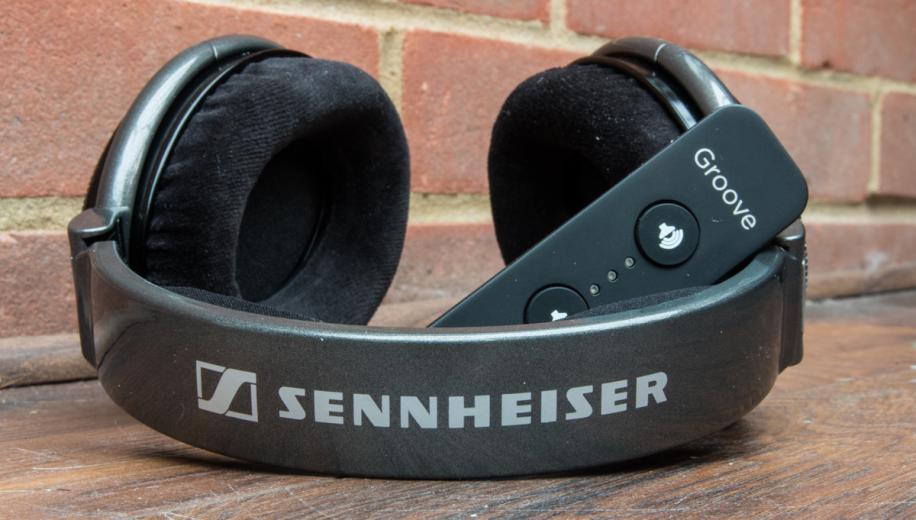 What is the Sennheiser HD650 Groove?

The thinking behind such a partnership is logical in itself. The HD650 is a full size home headphone that is designed to be run from a headphone socket that is reasonably powerful. This is a feature that can be found on most integrated amps and receivers but if you have been working towards a pair of headphones like this from Sennheiser's smaller and easier to drive models and have been using your phone or laptop, these are going to struggle with it. The Groove is a one stop shop that can ensure that you get the best from your new headphones.

Of course, you've probably noticed that there are one or two compact headphone DACs on the market right now. You can buy the HD650 as a standalone product for £400 or around £300 from some suppliers, freeing up a notional £100 to £200 over the price of the Groove. Does this pre-prepared partnership deliver the goods or are there better ways to partner the HD650? The HD650 has been on sale for fair amount of time now but outside of their lifestyle ranges which see regular updates, Sennheiser generally leaves their full size headphones alone until such time that they feel that they can make them decisively better. Like most Sennheiser models further up the product chain, it is open backed and leaks a fair amount of noise into the outside world when in use.

Each enclosure is built around a 40mm dynamic driver for which Sennheiser – as is their tradition – supplies very little information on. What they will say is that the drivers themselves use a neodymium magnet assembly and have been designed to provide an even and entirely accurate frequency response. The voice coils – again without any specific numbers – are purported to be extremely light with a view to offering fast and accurate transient response.

The quoted frequency response (with no roll-off given) of 10Hz-41kHz is impressive judged by any standard as is the peak output of 103dB – something I'd advise against trying while you happen to be wearing them. The HD650 might be using the same size drivers as most Nomad headphones but it offers the possibility of going rather louder and with more assurance across the audible frequency range – if, of course, you can drive them properly. This is where the Apogee Groove comes in. This is a USB powered, DAC and headphone amplifier built into a small metal lozenge shaped enclosure. Built around (amazingly enough) an ESS Sabre DAC, it supports formats up to and including 24/192kHz PCM. The output is built around Apogee's While Sennheiser occasionally lets itself have a mad moment and produce a product that is visually striking, it's business as usual for the HD650. Finished in 'Titanium' (that's grey to you and me), the design is sober if you're being polite and dull if you aren't. Spend a bit of time with the HD650 though and it starts to make a fair bit of sense. Nothing is there for embellishment or frivolity. Instead you get a very fuss-free pair of headphones. One minor point of specification is that the HD650 as supplied with the Groove, comes with a short cable and 3.5mm jack while the standalone version comes with a longer version and quarter inch jack. As the cables are interchangeable, you can always convert it later on if you need to.

The drivers themselves are mounted in a large, open backed enclosure with an ovoid shape intended to help it encase the ear comfortably. Unless you are the BFG, the size of the enclosure is such that your ear should be contained without any of it being trapped under the earpad. The pads themselves are fabric rather than leather and in the rather chilly conditions that testing took place under, are probably preferable. It's also worth noting that the HD650 is beautifully built. Absolutely everything on it feels like it is going to last the test of time and withstand a few knocks and drops. There are some quirks though. Sennheiser has elected to have the cabling for the HD650 go direct to each eapad, creating a y-shape cable rather than a single attachment with the wire routing through the headband. This means you are more likely to come into contact with the cable when you move your head. The pressure that the Sennheiser applies to your head is also unusually high. On the plus side, you are unlikely to have them fall off on you but after sustained listening, they really do make their presence felt. This combined with the limited movement in the headband and earpad hinges does leave you feeling that Sennheiser has very specific ideas about how their product will fit and have no intention of you deviating from that.

The Apogee is also simple but no less elegant for that. Connecting it to a USB connection will power it on and after that, you have a choice of two large buttons – one to raise volume and one to lower it. Three LEDs show sample rate, level and act as a sort of graphic equaliser in use – although with only three lights, it is not the most in-depth review of the music being played. Like the Sennheiser, the Apogee is very well built and while it looks a little on the sober side, it manages to come across as impressively functional. How was the HD650 Groove tested?

The HD650 Groove has been tested as a pair connected to a Lenovo T530 ThinkPad running jRiver, Spotify and Tidal. To get a better handle on the performance of both components, a pair of Audio Technica ATH-A2000Z headphones has also been used with them while the HD650 has also been tested with the Oppo HA-2SE and Chord Mojo. The material used has included lossless and high res FLAC and AIFF, compressed material from Spotify and both lossless and Masters content from Tidal. On the assumption that Apogee emails you a driver link in a relatively prompt fashion, setting up the HD650 Groove is extremely simple. With the driver installed, the Apogee appears as a selectable output and works happily from there on out. It doesn't take too long to establish that this is a very powerful headphone amp considering its small size. In the great scheme of insensitive headphones, the Sennheiser is far from the worst offender but running it off a mobile phone or even the beefier output of a Pioneer XDP-100R sees you maxing the output pretty easily. Sennheiser's choice of the Groove is a solid one because it has plenty of power in hand to ensure you choose the right listening level for you rather than the one the electronics can support.

Neither is this the only virtue that the pairing possesses. I've been listening to the new SOHN album Rennen a fair bit recently and the HD650 Groove does a seriously impressive job at unpacking this complex and dense album and making sense of the vast amounts of information on offer. This success is also a partnership rather than one component carrying the other. Splitting them up and allocating the HD650 to the Oppo HA-2SE and the Apogee to the Audio Technica ATH-A2000Z reveals that the Sennheiser's open back design gives it an effortless three dimensionality that the more enclosed Audio Technica can struggle with while. At the same time, while the Oppo has some advantages over the Apogee which we'll cover in a bit, the sheer grunt that the Groove has at its disposal is not in doubt. Longer listening to this partnership reveals it to be one that balances the opposing needs of accuracy and handling music that is less than pristine (either in mastering or sample rate) extremely well. Sennheiser prides itself on a sound that is 'studio accurate' and there is an undoubted sense that what you hear from the HD650 is a down the line and extremely faithful take on the recording in question. Thanks to good levels of refinement though, it handles sharp top ends and thin material with commendable forgiveness. Give it a great recording through – and I keep coming back to Nils Frahm's Spaces whenever I need such a thing – and there is an effortless and immensely forgiving sense of accuracy and 'being there' to how the HD650 makes music.

The major question for would be purchasers is whether this pre-ordained partnership is better than one that can be created by buying the HD650 on its own – often at a considerable saving from the price on the Sennheiser UK website – and partnering it with another DAC. After some time listening to the two components together and with other devices, I believe that there is a compelling argument for the package. Listening to the HD650 with the Oppo HA-2SE is illuminating. The Oppo also uses an ESS Sabre DAC and the recent revisions to turn it into the SE model have boosted the performance – used with earphones and more sensitive headphones, it is clearly better. In order for it to work well with the Sennheiser though, it needs to be in high gain mode which isn't as good as the low gain setting and even then it lacks some of the composure of the Apogee. The Chord Mojo is better than the Apogee but given the price jump, it needs to be.

With this in mind, some of the limitations of the duo do need to be taken into account. This is not a go-to duo for use on the move. The Sennheiser is too big and prone to noise leakage and the Apogee, while capable of OTG operation, didn't work with everything I tested and seriously effects the battery consumption of my phone when used in this fashion. There is no DSD support (although this really has little real world relevance) and no option to use it without the USB driver. This last point is only really an issue if you're thinking of using the Groove with a locked down work computer but it's something that the Audioquest Dragonfly units avoid for example. After some time listening to the two components together and with other devices, I believe that there is a compelling argument for the package

The Sennheiser HD650 Groove is one of the more unusual partnerships we've seen pass through for review, combining as it does two totally different company products into the same box. Having spent some time with it though confirms that this is not a marriage of convenience but a genuinely worthwhile pairing. This is a one-stop method of obtaining a very capable headphone system indeed and the result produces a sound that balances accuracy and refinement extremely well. If you don't fancy the idea of mixing and matching your headphone and DAC, this takes the hassle out of the task and works beautifully. It's a slightly niche product but if you're shopping for such a device, the HD650 Groove comes Recommended as a fine example of its type.