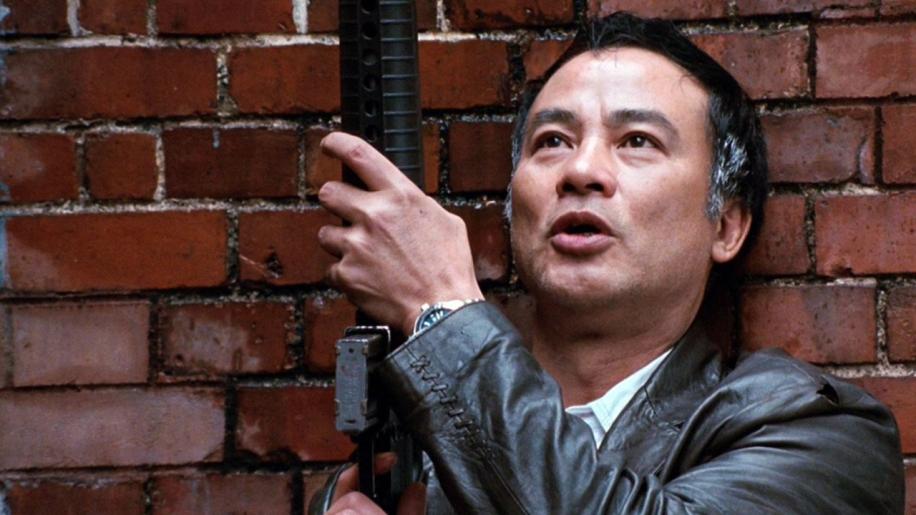 If fans of Hong Kong crime cinema (and I very much include myself in that category) are being honest, the format for this style of movie hasn't really changed a great deal in the past twenty years. Since the advent of “heroic bloodshed”, we haven't been privy to any significant evolution of the form in the intervening years. We've seen Lam and Woo go and return multiple times but, barring Johnnie To's polishing of the formula and the occasional gem amongst the rubble such as the Infernal Affairs trilogy, the gap has never been filled with anyone willing to push things forward with the momentum necessary to make it once again seem credible rather than merely acceptable. The question that begs asking is, do the fans really want that change?

Black Ransom, on the face of it, symbolises everything that is staid and familiar with the genre. Both written and produced by Wong Jing, the very name for many indicates run-of-the-mill storylines and unoriginal characters. However, with the directorial duties falling to Kwok-Man- Keung, for whom this represents only his second feature film (the first being 2007's crime comedy Bullet and Brain), there is the distinct possibility that Black Ransom could break free from the bonds of regularity and show us something new, or at a push feigning inspiration.

With Simon Yam attached things always look a little rosier, but moving away from the overly exuberant maniacal arch criminal that he has typified in many To films, here he plays the central protagonist, a world weary cop. It's nice to see Yam on the right side of the law as he is one of the few actors in the industry capable of conveying both the over-the-top insanity of a power hungry despotic triad and the downtrodden malaise of a man working too many hours for not enough credit. Here, in the latter category, he is instantly recognisable as an archetypal aging cop figure called Mann; a widowed policeman with a teenage daughter, for whom keeping his head down and getting home safely is enough to make his day considered a success. Keung introduces us to him via way of a flashback to when he was a wiz with firearms, handily laying the groundwork for an all too obvious later re-emergence of his marksmanship skills when the situation calls for it.

Mann plays second fiddle, with his ragtag bunch of older and less successful cops in the B Team, to a squad known imaginatively as A Team. Not one to go lightly with the clichés, Wong Jing has written these flashy uber cops as men who wear sunglasses inside, always deride their colleagues and generally as an amalgamation of the rich kid/class bully from every eighties high school movie you've ever seen. As the duration of this feature clocks in at a concise ninety minutes, it isn't long before the central plotline surfaces and we get to see what will be the catalyst which drives Mann forward. Apparently there have been a string of gangsters going missing and the police don't know how to make heads-or-tails of it. Soon it is discovered that they are being kidnapped for ransom and the tussle between A and B Teams starts as to who should be handed the case. A few minor twists and turns later involving one missing hoodlum and the two teams butt heads and we are led to believe that Mann's group in some way have to covertly investigate thanks to help from the senior officer, Superintendent Koo (Fala Chen), who also doubles as the compassionate female to Mann's misunderstood male role. The lines couldn't be any more clearly drawn if this were a soap opera complete with teenage cliques.

If you thought this was going to turn down a darker and edgier route thanks to the kidnapping narrative, I'm afraid you'd only be partially right. There is a mild twist to the tale, but it only really pushes the story in the direction that Jing clearly wanted to explore, and unfortunately it is one that has been looked at many time before in Hong Kong crime thrillers. Things go a bit Magnum Force when the notions of vigilantism and disgruntled cops enter the fray, and Mann as the paragon of good, honest policemen is the foil to this wayward morality. It isn't a bad concept, as the many times it has been delved into on the big screen proves, but the problem lies in the two dimensional characters. To make the central idea of a man going off the rails and renouncing his prior moral attitudes plausible there is a necessity to either give as little information as possible, thus leaving the audience to guess as to motives and what cracked this seemingly sound mind, or a reasonably inventive backstory should be put in place to flesh out the role. Unfortunately, neither of these routes is taken and what we get is the age old tale of a good guy who's lost a loved one and chosen to take his own form of justice to the streets.

These basic, much (over) used templates are wheeled out to elicit some kind of sense of empathy that the audience cannot feel because the relationships to those lost simply aren't shown beyond a meagre few seconds. The clincher that this is following a worn out blueprint for the genre comes in the form of the duality that is highlighted, namely the similarities between the hunter and hunted. Many of the best crime tales, be they from Hollywood or Hong Kong, have utilised this way of book-ending a morality spectrum with two figures who could quite easily be interchangeable had fate dealt them a different hand. From Woo's The Killer to Michael Mann's Heat, the key has always been in the interplay and charisma of those involved, but unfortunately opposite Yam as Mann is Michael Miu (Sam) who, though competent, just fails to illicit the same sense of a criminal mastermind locking horns with his police pursuer.

The action works quite well, but the two kung fu sequences that revolve around a new recruit named Rocky just feel out of place and only serve to lighten the tension rather than increase it as whilst everyone else is pointing guns, he duels with fists and over-elaborate kicking of nearby objects to attempt to apprehend those he's chasing. It's a solid performance from Yam, but then what would you expect from such a versatile and dependable actor, however the material is beneath him. It is middle-of-the-road cop fare that will neither tax nor truly thrill its audience and is likely to be very familiar to most fans of Hong Kong cinema.