By all rights this should have been worse than Don't Breathe 2. 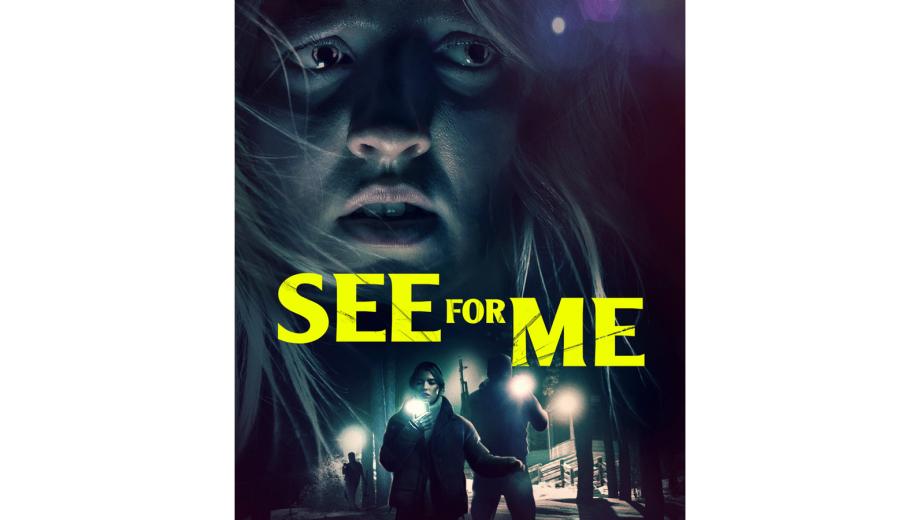 Trading in a generic title and a no-name cast, See for Me somehow manages to be more Crawl than Don't Breathe 2, with a clutch of solid performances, rounded characters and tense twists.

Literally centred around an app that goes by the title name of See for Me, this home invasion thriller unbelievably not only manages to distinguish itself from the Don't Breathe series but also turns in a decent 90 minutes of thrills, with real-life visually-impaired actress Skyler Davenport perhaps unsurprisingly convincing in the blind lead, but more impressively convincing as a potential victim forced to fight back without turning into Daredevil.

Sophie Scott was an Olympic skier until a degenerative eye disease destroyed her eyesight and left her blind, depressed, and disillusioned. Now she takes gigs housesitting for rich strangers, navigating their properties with assistance via her mobile phone. Her latest job sees a group of armed robbers arrive in the night to break into the vault, seeing Sophie call for assistance on her app whilst waiting for the police to respond, with a remote guide to help her navigate her treacherous position.

See for Me takes a considered amount of time to establish its understandably bitter lead character, struggling with a justifiably concerned mother, and on the cusp of going off the rails, seeking illegal ways to make money on the side in what feels like the start of a very self-destructive element to her personality. She's got the chance to learn how to ski blind but sees no hope in this seemingly impossible ask, instead choosing to while away her time in the properties of rich people, using her disability to get away with the occasional bit of subtle theft, bitter and defiant to the world around her. Skyler Davenport is cast in the lead, a veteran voice actress with a decade of videogames and animated shows to her name, making her live action debut here. She's surprisingly confident in the part, assisted no doubt by the fact that she is visually impaired in real life, lending an authenticity to the piece which doesn't require her to have superhuman sonar, or blind shoot people with precision, instead employing the use of an app to navigate the situation, keeping the tense situations relatively grounded.

Just don't dismiss it for the utterly generic title

Supporting is The Flash's own XS, Jessica Parker Kennedy, as the girl on the other end of the line, playing the eyes to Sarah's fraught protagonist, and it too is a solidly developed relationship cleverly established before the threat arises, whilst Sons of Anarchy's Kim Coates gets an extended cameo playing one of the antagonists who, neatly, is initially just a voice on the other end of the line too. Director Randall Okita hasn't got much to his name, but does a decent job here, particularly with how he frames the tense moments, drifting across the layout of the house from the outside to look in on the characters creeping around within.

It's good work all-round, with Davenport remarkably assured in the lead, solid tension maintained, and the feature not sticking around longer than necessary; the tidy 92 minute runtime getting the job done nicely. Indeed, really the character design and considered narrative leave it more akin to something like Crawl than the fatally flawed Don't Breathe 2, although don't expect any kind of significant budget here - it's a stylish but inherently limited piece nonetheless. Just don't dismiss it for the utterly generic title, See for Me's entire premise might sound blisteringly implausible from the name alone, but within the framework of this movie's carefully established universe, it works, making it surprisingly easy to suspend belief, and sit back and enjoy the actual suspense.