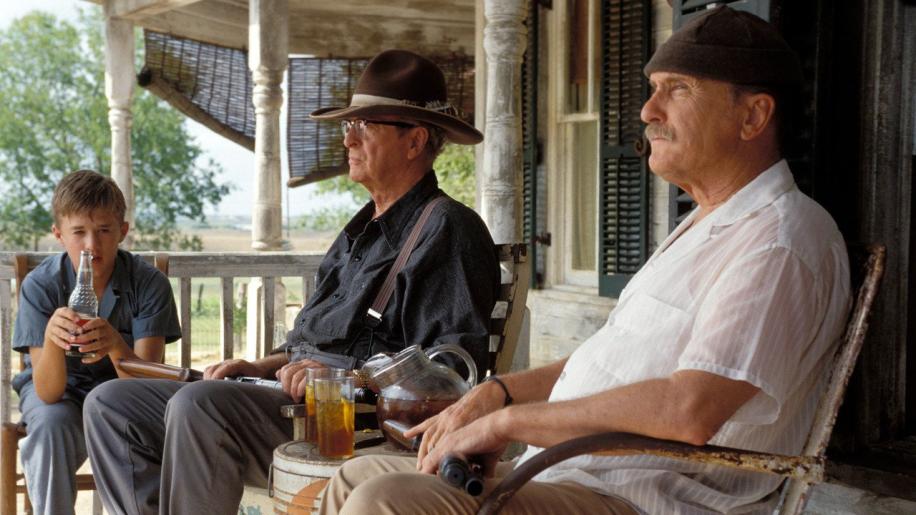 New Line have included both a widescreen 1.85:1 and a fullscreen version of the film on side one of the disc and the extras on side two. I watched the widescreen version throughout and tried to do a reasonable back to back comparison of certain scenes, although this is difficult as it meant reverting to the menu screen to switch modes. Although less than ideal I was happy with both prints. Image is not bitingly sharp, in fact it is a little soft. Detail on the faces of Caine and Duval is lost, as is the shots of the cornfields. Colours are neutral and a little subdued except in the sequences in Walters imagination where, perhaps intentionally the colours gain a punch and vibrancy that is lacking from the real life sequences. Small amounts of edge enhancement are present, but I have now become quite adept at looking for it and I doubt most people would be aware of the small amounts on display. While not displaying the cutting edge in encoding quality it is comfortably in the middle of the road. Encoded in Dolby Digital 5.1 at 448kbps the soundtrack is a notch above average. Vocals are clear and distinct, with a nice richness in the voices of the old men, which comes from a well-rounded bottom end. While it could never be described as a bass rich track, scenes involving the lion roaring, or battle scenes in the foreign legion have a fullness which you only get if the soundtrack is balanced to include frequencies below 80Hz. Surround action is sparse but all the more enjoyable when you hear it. The early biplane scenes, or the later helicopter shots exploit this well. Finally the full six channels kick in nicely when the emotional score builds to its crescendo. Again this is not demo stuff, but is nicely involving and evocative. I always enjoy a New Line Platinum disc and look for them especially in the release schedules. As I have said before in these forums they rarely disappoint. Secondhand Lions follows the trend, and includes extensive and noteworthy extras. The obligatory directors commentary is provided by McCanlies, and indicates how deeply personal this piece was for him. The structure is of the running commentary variety “this was shot here...that was originally blue...she was supposed to say...whatever” but this is interspersed with a gentle fondness that you have for your own pet project. McCanlies sounds like a proud parent, and he has every right in my opinion.

Side two of the disc is packed with worthwhile and watchable extras. A very good making of documentary extending to nearly thirty minutes, more than 15 minutes of excellent deleted or alternate scenes with optional directors commentary provide a greater depth to the characterisations and include the cutting of a complete thread of the film, the Santa Claus bandits. All very interesting. There are three brief featurettes with a slightly sycophantic tribute to Haley Joel Osment, a host of TV spots, which show nicely how the film is marketed to a different type of audience, and the highlight for me is a 25-minute feature of the story of how the script eventually got made. This is fascinating stuff recalling the 10 yrs in development hell. How the studios tried to get it made as the sequel to Butch and Sundance (But they were informed by his agent that Paul Newman does not play OLD - even though he was seventy at the time). McCanlies fought for his baby for 10 years and eventually won the battle, no wonder so much emotion is included in the script! I really enjoyed Secondhand Lions. It is a gentle family drama that is rich in humour and strong on emotion. It features excellent performances from the leads and tackles many big issues without force-feeding the viewer, and only a little sugar coating. New Line have again produced a very good disc. It's a keeper