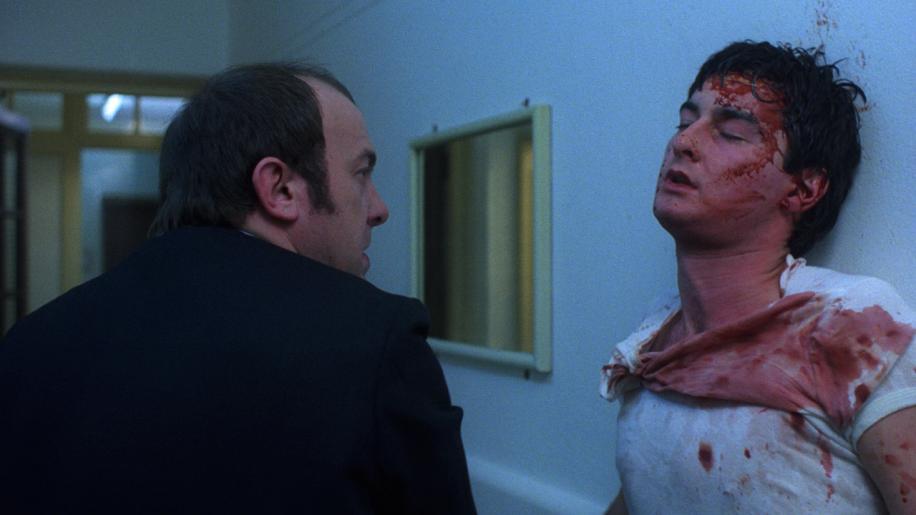 The TV version of Scum has been presented in its original non-anamorphic full screen state that is below standard for what we expect from TV these days but only to be expected at the time. In fact the full screen format lends itself quite well to the claustrophobic, prison feel to the movie but still does not look very good in terms of technical standards. The picture quality is below average, with fairly good detail at the expense of heavy grain and faded colours even given the limited scheme inherent in the setting. On the other hand the anamorphic 1.78:1 aspect ratio widescreen transfer that we get for the movie version is not actually that much better. Sure it is cleaner, with less grain and no apparent damage - unlike its companion - but it is still pretty shoddy by modern standards. Most restored prints look better than this but again, in this case, the problems actually often enhance the feel of the movie rather than detract from your viewing pleasure. Both the TV and movie are presented with basic Dolby Digital 2.0 tracks. They are fairly rudimentary mixes but the dialogue is never less than clear and coherent, which is probably the most important thing. In line with the documentary style there is almost no music - the closing track an exception - and there is certainly no reason for bass, but there are a few effects, even if they are given limited directionality considering the frontal bias. Although perhaps what you would expect for a TV drama, I was a bit disappointed that the movie did not get slightly better treatment. The biggest extra is really the unseen original BBC TV version of Scum, but few are likely to need to watch this given that it is so similar to the film version, albeit running a few minutes shorter in length. It is arguable which has more impact - the original version has the actors at a younger age and is more gritty and real but the movie is clearly superior in terms of 'watchability'. At the very least though it is a fantastic gem of an extra feature - how often do you not only get an alternate cut of a movie but actually a completely new version filmed before the final version? This is already some of the best supplemental treatment I have ever seen a release get.

Disc One, which contains the unseen original BBC version of Scum, also has an audio commentary with the producer Margaret Matheson and two of the actors: David Threllfall (Archer) and Phil Daniels (Richards). They discuss a great deal, from the location used - an old person's home - to how they all got involved in the project. Although there are plenty of anecdotes - particularly about how the late Director Alan Clarke made some of the blows real and gave them all daily drills - the main focus is on the ban. They talk about the cuts that were initially made - a second suicide scene and more violence - and how the decision to still ban it was believed to have been political, the BBC facing pressure from the Home Office. It is a very interesting commentary that tells you a great deal about the production.We also get an interview with the film critic Derek Malcolm, talking about the late Director. He runs through a brief biography of Clarke, listing his films and the impact that they had on British TV and cinema for years afterwards. He seems very passionate in his praise, but also tempers his seemingly biased attitude by noting the fact that, whilst the work was of importance, the films were not necessarily the best that Clarke could have accomplished - had he reach his peak. Finally on the first disc we get an interview with the producer on the TV version of the film, Margaret Matheson. She discusses how she started the project and covers much of the same information that she divulges in the commentary but does expand some more on the BBC ban. She seems extremely bitter, somewhat understandably, about the decision and talks about how it was because the Government did not want the truth about Borstals to be known.

On the second disc, which houses the movie version of Scum, we get a commentary with actor Ray Winstone who talks at length about the learning experience he had on the production and how great a director - and mentor - Alan Clarke was. Although I am a great fan of Winstone, his knowledge of the production does not appear to be as comprehensive, understandably, as that of the three contributors on the previous commentary. Unfortunately that makes this a slightly slower, less interesting listen, even though it does have a few nice anecdotes about his experiences - including one notable incident on the train where a person who had obviously seen Scum confronted him.

There is a fifteen-minute Interview with comments from Writer Roy Minton and Co-Producer Clive Parsons, once again discussing Alan Clarke and how great a director he was. It features a little too much film footage - basically random scenes inserted into the interview to pad it out. Parsons talks about the two different versions adding another point of view to the ban, but not really offering much new to proceedings. Roy Minton eventually pops up and mentions some of the story lines that were removed between the two versions and which were even taken out of the original version, but which he felt should have been in them. Since the two participants are clearly not being interviewed at the same time there does not seem to be any reason to have them in the same featurette. There is also a nine-minute interview with Co-Producers Clive Parsons and Davina Belling talking together. Parsons takes the lead, talking about how and why they decided to do the movie version and leaving Belling very little time to talk herself. She does get a few moments where he pauses for breath and manages to talk a little about wanting the movie to reach a younger audience and the fight to get the productions released. We get a twelve-minute interview with Executive Producer Don Boyd talking about Alan Clarke working with Roy Minton on the production and the casting differences between the two movies, also noting how Ray Winstone was a must. He discusses how the original draft for the movie was vastly different to the TV version but was thankfully rejected and how he convinced Clarke to resist the censors' recommendations and stick with the important scenes, similarly arguing that he should avoid being pressured into setting the movie to music. There is also a separate nineteen-minute interview with Writer Roy Minton talking about the original trilogy that he and Clarke had planned - of which only Scum was made. Minton discusses researching the real borstals and how all of the incidents he put in the script he had encountered during his research. Of all of the interviews, this appears to be the most interesting and informative.

Cast Memories is basically a sixteen-minute collection of interviews with various members of the cast including Phil Daniels who played stooge Richards in both versions, David Threlfall who played activist Archer in the original TV version, Mick Ford who played Archer in the movie version and Julian Firth who played the weak victim Davis in the movie version. They all praise Alan Clarke again - something which has become ludicrously repetitive by now - but the recollections of the endeavours on the production are often interesting enough to give this a listen. It is also great to see so many people contribute, although a shame that there is no sign of Winstone in the flesh. Finally we get two theatrical trailers. Firstly there is the 'U' version, which runs at a minute in length and is basically made up of stills from the movie with several stupid voices narrating quotes. Then there is the 'X' trailer which - though set to the same music - is made up of important clips from the movie itself. I think the U trailer is hilarious and definitely worth a watch for a laugh but the X trailer certainly gives away too much from the movie itself - basically telling the entire story in little over two minutes. Scum is a seminal piece of filmmaking that has been given some superb treatment - not just two versions but two different films from the same script. The audio and picture quality are not great, but that is understandable considering the age of the original material. The extras are pretty comprehensive, with two commentaries by the cast and the crew and a wealth of interviews. This is certainly the best release that Scum has ever seen and probably ever will see.