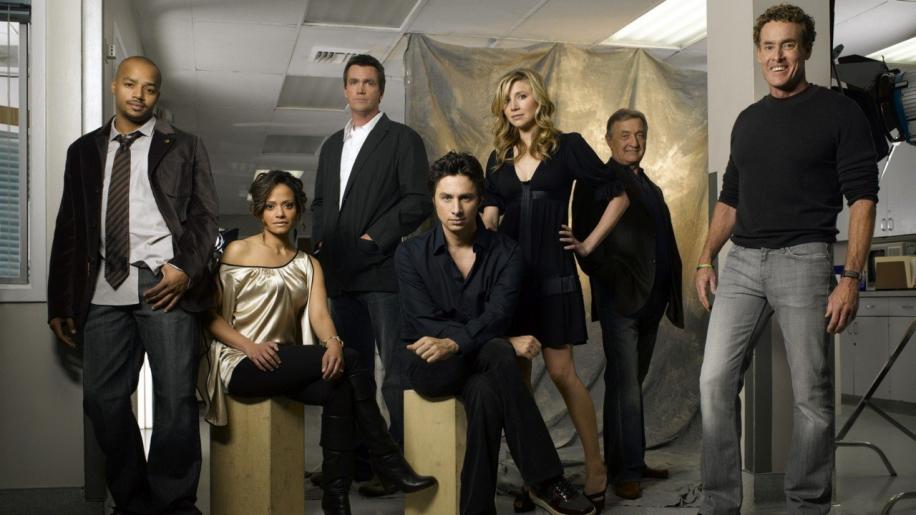 The picture is one of the more disappointing aspects of this disc - firstly it is presented in full screen 1.33:1 but as this was the original broadcast ratio one can't complain - it's just that we've become accustomed to widescreen now so it still catches me by surprise when it's not present on modern shows. The more annoying aspect on this disc is the amount of grain and motion artefacts - it's not so evident when watching normally on a TV display, but when viewing close-up, especially on a computer screen, one can see it quite clearly. It shouldn't put off the casual viewer but I'm duty bound to at least mention it here. Interestingly, although the image has been left in it's original broadcast format, the sound has been re-mastered to Dolby Digital 5.1. It hasn't made a massive amount of difference to be honest - this is a DVD of a sit-com so there is very little surround and nothing that wouldn't have worked just as well with DD2.0. I'm not criticising the use of 5.1 here, but just warning you not to expect window vibrating bass or effects flying around the room - it might say 5.1 on the packet but that doesn't translate to a 5.1 listening experience. There is plenty of good music in this series though and this does sound good which is a bonus. Speech is clear and functional. Some nicely animated menus bring us to the following extras....”A rare condition” (14m53s). This is a standard behind the scenes featurette where we get a brief synopsis of what this season is about, interviews with most of the cast and crew and some clips. Interestingly we learn that this show is actually filmed and created in a real hospital - everything they need to make the show is in the building, so even the writers are based in an old ward and the actors get changes in empty offices.

”Johnny C keeps talking” (5m28s) is an interview with one of the casts more famous members, John C.McGinley. He's one of those actors who most people recognise but can't necessarily name, having popped in many films such as Platoon and Get Carter. There are also 3 audio commentaries on this disc - each with the shows creator Bill Lawrence and featuring the input from various actors in each one. They are quite jovial affairs and having actors like Braff and Faison on them makes them very entertaining.

This disc starts off with “Alternate Lines - A second opinion” (4m36s). This is various scenes from the season being shot with different lines - so each scene might have 3 different one-liner punch-lines. Here you get to see all the different versions. “Stunt Casting” (3m) is a little featurette about the many stunts in the show and how actors like Braff try to do as many of their own as they can. There is not much depth here but it's funny just to see some of the slapstick moments again in one place. This disc also contains 2 further audio commentaries in the same vein as on disc 1, but joining Bill Lawrence this time are Sarah Chalke and John C.McGinley.

The final disc contains a few more extras but again, they are all featurettes rather than anything more substantial. First up we have “Musical Stylings” (7m1s). This looks at the strong musical influences on the show - from “Ted's band” through to the creator of the theme-tune and how Bill Lawrence uses music to great effect in each episode. “Secrets and Lies” (10m31s) is another behind the scenes featurette, this time looking at some specific scenes and how they were put together. “Practice, Practice, Malpractice” (4m31s) is a blooper-reel. “J.D.'s mojo” (4m9s) is a look at the character of J.D. and specifically the various love interests he has during this season. “Imagination Gone Wild” (7m38) looks at the funny fantasy sequences that many of the characters have during the show... if you want to see Elliot in her “naughty nurses outfit” again, then this is the one for you!! Finally there is another episode with an audio commentary, this time with Lawrence and Judy Reyes (Carla). There are also 8 deleted scenes running for 8m53s. Scrubs is a just what we need in this post “Friends” era - something that works on multiple levels, has a great cast, good storylines and above all some very funny moments. I see no reason why this show won't warrant more series in the coming years. The extras aren't great but you're not buying it for the extras are you...as a bonus, with no ad-breaks, each episode can be whizzed through in 21 mins! For fans of the show, this box-set is the easiest way to have all 22 episodes in one place and for that it's worth it alone!