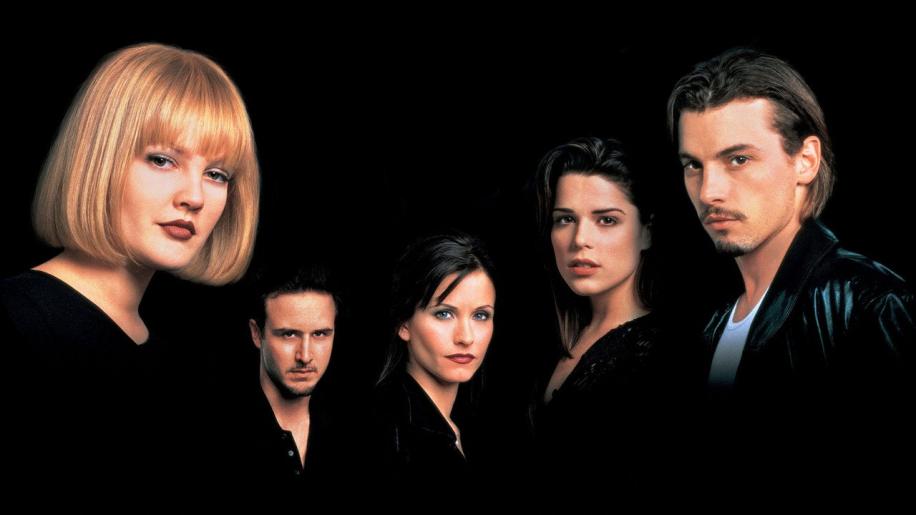 This anamorphic 2.35:1 print delivers the goods. Many of the creepy scenes are bathed in shadow, and the blacks come across as suitably dark with barely a whilst retaining detail well. The image never feels swamped, and the image comes across well with no noticeable artefacting or grain.

Colour saturation is good also, with skin tones looking natural and the frequent splashes of blood being a rich red: I couldn't detect any colour bleed either (excuse the pun), with edges coming across bold and clean.

Speaking of clean, the transfer looks just that - although I did notice a few blemishes and the odd scratch, for example at the end of the opening set-piece just before the camera zooms in on the corpse, a bright, scratch-like circle appears momentarily onscreen. Aside from this though, the transfer looks as it should - new.

Edge enhancement is never really a problem, although this may be due (in part) to the fact that this transfer isn't the sharpest one around. Not that the image is too soft - it offers depth and looks reasonably cinematic - but it doesn't compare in the sharpness stakes to some of the more recent releases that we're getting used to.

Overall though this is a solid video presentation.

Presented in both Dolby Digital and DTS flavours, one of the main reasons to buy this disc for some will likely be because of the latter sound option. I chose initially to watch the movie in DTS, and it offers a solid, though hardly groundbreaking aural experience.

The imaging and steering is reasonably good throughout with effects placed accurately around the channels, and there is much subtle detail to enjoy: in the scene where we first meet Sidney, the tapping of the keys on her computer have a solid and crisp sound to them, and the distant peel of thunder rolls over your right shoulder and into the left front channel. As the sound moves it's subtle and quiet yet powerful, and sets the tone well.

The surround channels are reasonably active, with good positional effects being placed around and behind you: although mainly used in the action sequences, the usage is in keeping with events onscreen, and adds to the jumps and scares when they occur (and thunder sounds great peeling through your living room).

I remember using the NTSC laserdisc version of Scream as a demo disc a few years back, and although I've just said the thunder sounds great, I was slightly surprised to be a little under whelmed by the LFE. The .1 channel is active, but not to the extent that I was expecting. I've mentioned thunder previously and the bass certainly adds weight, but there's no real guttural rumbling in there: it sounds good, but could sound better. Some of the action sequences could benefit from greater usage of the LFE channel too - again bass is present but not in spades, although it's worth noting that my observation may not be shared among all viewers (hey I just love bass).

Of the two choices of sound format, there are differences but they are subtle and often only apparent on repeat viewings of the same scene. The DTS mix is louder - and slightly brighter in presentation - but it's not the night and day difference like you see on some discs. Playing varied scenes such as the opening set-piece and the moment where we first meet Sidney at her computer reveals little in the way of differences other than volume: the detail you hear in the DTS track is identical to the Dolby one, albeit slightly louder. As for which is better, I'd have to say it's a tough one to call. Those with acoustically “bright” rooms - particularly if you have little in the way of furnishings and hard floors - will likely prefer the Dolby Digital soundtrack, however those with “dead” rooms will likely plump for the DTS option for the slightly more forward presentation.

There's not a lot in it, so take your pick.

Overall this is a solid presentation, perhaps lacking slightly in dynamic range and hardly likely to set the audio world on fire, but it does its job.

First up we have a feature commentary from Director Wes Craven and Writer Kevin Williamson. This is the same commentary which was recorded for the original NTSC laserdisc, and it's an interesting and lively one: with insights into the production, the story and script, casting and interesting anecdotes on key scenes - it's all here, and it's delivered well by Craven and Williamson who actually sound interested in what they're saying.

Also we have a reel of behind the scenes footage which I personally loved: it may not be to everyone's tastes, as essentially it's just footage thrown together (no commentary or cheesy voiceovers in sight), but it's because of this that I liked it. It shows Craven interacting with the cast between takes, with snippets of him directing and scenes being played out for cameras.

Also we have a 29-minute documentary “Behind the Scream” which features producers, Craven himself, Williamson and various members of the cast. As such I was expecting a puff piece, but was pleasantly surprised as it is informative and entertaining. Covering how the production came about, elements of the script, with screen tests and various scenes cut from all three movies, it's an interesting and worthwhile watch.

There's also a theatrical trailer, presented in Dolby Digital 2.0 anamorphic widescreen, outtakes (which are rough around the edges but again, humorous and worth watching), and a series of appalling short interviews of the cast. Surprise surprise, they all extol the virtues of the director, the script and each other. Yuck.

A great movie, with solid video and audio presentations, and great extras. Recommended.