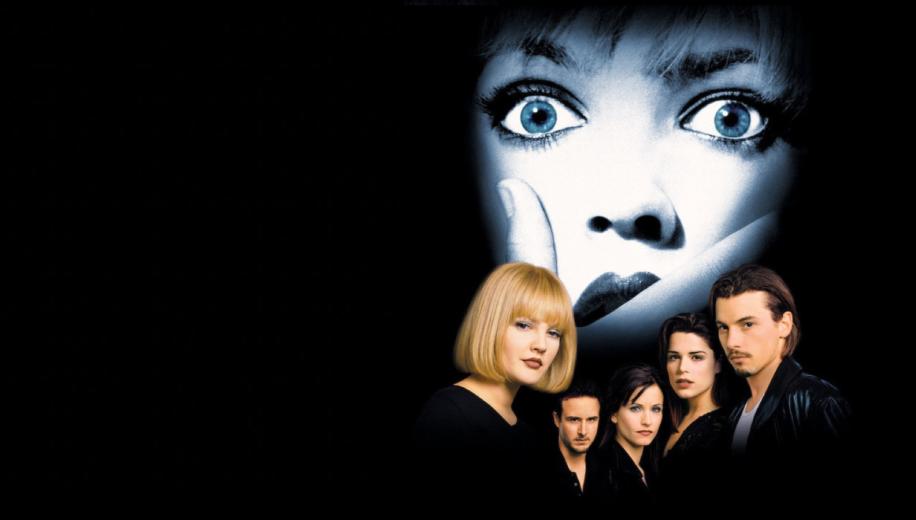 ﻿The beauty of Scream was always its simplicity. Never overt, fiercely intelligent with it and superbly realised, the simplicity of the film allowed everything else about it to be brought to such a vivid life that in a genre whose films tend to act as gaudy time capsules for the period they were made, Scream remains a vibrant, effective, and very modern horror film. Even after twenty-five years.

A small town, a series of brutal murders of the local teenage population and a masked killer. Taken at its most basic, Wes Craven and Kevin Williamson conjured up a classic premise that works on that most base of levels. A clinically effective murder mystery, with intrigue about a past evil and sense of how this has affected the whole town, it's tightly plotted and works incredibly well. But layer on top of that, that ironic and meta-understanding of the genre and a superb set of characters that are both timeless stereotypes and beautifully subverted tropes in themselves, and the film bursts into life in a way that a decade of horror films from across the spectrum of horror never really managed and has struggled to recapture since.

There’s a reason that its main cast (those who survived each entry anyway) kept returning – Campbell, Cox and Arquette are quite wonderful in what they bring to the roles. Leaning into and growing out of their traditional ‘final girl’, ‘feisty hero’ and, er, ‘cop’ roles, they all bring a fizzing energy that comes from a once-in-a-lifetime gathering of this group of people. Their chemistry is immense, their interplay easy and spiky, their romance surprisingly cute and realistic (unsurprisingly given Arquette and Cox fell in love thanks to these two characters) and even after over two decades of similar characters from thousands of similar films, this group stick in our collective conscience.

But they’re also joined by an exceptional supporting cast, from Ulrich, Lillard, McGowan, Kennedy, Winkler and of course Drew Barrymore, all doing similarly exceptional work. Be it hiding in plain sight or simply subverting audience expectations based on their star power, all do exactly what is asked of them by Craven and Williamson and it works wonderfully. The film’s much vaunted humour begins and ends with the characters, giving it an organic and naturalistic tone and one that feels perfectly interwoven with the horror elements of the narrative, something so many so-called ‘horror comedies’ fail spectacularly with.

And what of the only real star in the entire film (at the time it was made anyway)? Horror legend Wes Craven had only really had one critically lauded film in the twelve years since the original A Nightmare on Elm Street, whilst hot young directors such as Peter Jackson and Guillermo Del Toro had taken over as kings of the horror landscape. But if Williamson gave Scream its brains, Craven was its heart. His masterful execution of the famous set pieces means Scream works as a straight up horror film, not just some clever, know-it-all piss take. The rightly celebrated and bravura opening sequence is still one of horror’s most effective cinematic set pieces because Craven not just knows inherently how to construct it, but because his cast and even those at the studio trust implicitly his background and his experience to make it work. Simply put, no Wes Craven, no (in)famous opening scene.

Scream remains timeless – sure, we may mock its missing mobile phones, but apart from the lack of a small rectangular brick surgically attached to the hand of every single teenager, you could be mistaken for thinking it was made a lot more recently than twenty-five years ago. No outlandish fashions, no garish soundtrack choices, no reliance on horrible special effects, the film looks as fresh as it feels. That elegant balance of horror, humour, intelligence, and fun has been attempted many times since and it’s never worked as well as it has here. With a Craven-less (very sadly) Scream reboot coming to cinemas next year, now is a perfect time to revisit where the franchise began in a burst of wonderful energy and life.

Scream was shot on 35mm film using Panavision Cameras and Clairmont lenses. It utilised an anamorphic shooting style (using both Panavision and Clairmont-Scope processes), the beauty of which can now be seen in this newly produced native 4K presentation of the original theatrical cut, created from a brand-new restoration and new scan (although scant details on what went into this could be found).

The disc presents a native 3840 x 2160p resolution image with an original aspect ratio of 2.39:1, and uses 10-bit video depth, a Wide Colour Gamut (WCG) in conjunction with both HDR10 and Dolby Vision flavours of High Dynamic Range, and is encoded using the HEVC (H.265) codec.

... the new 4K release of Scream is superior in every single way

We’re going to split this video review into two parts to do it and the release complete justice….

On its own merits, the image looks really solid. The opening scenes with Drew Barrymore show us exactly what we’re in for across the rest of the disc. The anamorphic shooting process renders the edges of the image slightly blurry and some changes to the geometry of shapes at the image’s periphery (due to the stretching and shrinking of the image done when projected) and this is what we see here throughout, so expectations need to be aligned. But almost immediately, 25 secs in, we get a great example of the disc’s overall image quality: the fine detail on Barrymore’s wool sweater pattern is razor sharp, the grain fields over her shoulders are clear and quite thick but looks even and organic and the colour palette employed looks very naturalistic. Moving onto 6 min 03 sec as Barrymore is looking out of her window at her soon to be very dead boyfriend, the highlights of her tears on her cheek are wonderfully bright, while the balance of the highlights down the edge of the phone she’s holding look perfectly natural, showing a sympathetic and not overt use of HDR to bring the image to life.

This all results in a real vibrancy to the external shots as well, especially those set during the day. At 19 mins 59 secs, as our Scooby Gang are perched on the wall to discuss the previous night’s shocking events, the blues of Campbell’s outfit and the flowers to the left of the image look radiant and bursting with life, but not unnaturally so. And overall, the image has a very natural look to it – it's nicely sharp but not unnecessarily so, the same going for its grain management and colour reproduction, which overall gives this disc a very pleasing image.

As for compression, bit rates of between 25mpbs and 35mpbs were seen across the film, with peaks witnessed of around 50mpbs. Motion looked great and with no instances of any compression issues such as frozen grain, this looks like the image was transferred to disc really quite well.

However, we have to consider this in comparison to the image seen on previous releases and a direct comparison of this new 4K image to the previously released 2011 Lionsgate US blu offers a surprisingly stark contrast. Firstly, gone is the horribly over-sharpened, almost digital look of that disc, replaced with that pleasingly organic level of detail. Sure, on first glance it may not appear quite as sharp as the previous release but after no more than a few seconds of watching, it becomes clear this previous version just looked horribly over processed – look at the same shot at 19 min 59 secs: while Rose McGowan’s white boots at first appear to be more clearly delineated, the ribbing on her yellow top is completely invisible on the 2011 disc, a great example of how at first over-sharpening appears to have more detail but the opposite is actually the case. The same goes for the cooler palette on the 2011 disc, again replaced with a pleasantly more natural look that is slightly darker and also adds a layer of depth previously missing. Finally, the image on this new 4K release has the frame opened up a little, showing slightly more image at the sides of the film. These kinds of obvious changes between releases often have both plusses and minuses, but in this case, the new 4K release of Scream is superior in every single way.

And last but not least, the differences between HDR flavours were once again negligible on my two displays. The DV image was slightly darker than the HDR10 layer but it didn’t dramatically alter the overall perception of the image. However, depending on your own kit, this may not be the case – some have mentioned the DV grade giving a much darker image than the HDR10 one but that wasn’t experienced on this reviewer’s equipment.

We listened to the region-free UK Ultra HD Blu-ray release of Scream on a Denon AVR-X4300 and a full 7.2.4 speaker set up made up of KEF speakers (Q series and Ci in-walls/overheads).

Scream is presented with a lossless 5.1 DTS-HD MA English soundtrack, based on the same soundtrack found on the film’s previous releases. And it's beastly.

Incredibly muscular, from the very first low-end slam as the film’s title appears on screen, it’s a track of real power and heft. Gun shots, body slams, audio stings, all are presented with a lovely rich sound design and presentation. Dialogue is crystal clear at all times and the music of the soundtrack, including Nick Cave’s iconic Red Right Hand sounds wonderfully full-bodied and seamlessly immerses the viewer into the film.

There’s not as much going on in the surrounds as this reviewer would have liked, but that frontal soundstage still manages to fill the room. Overall, it’s a really robust 5.1 track that reminds us that we don’t need a fancy new 3D soundtrack to feel part of what’s going on on-screen.

Other soundtrack options include German lossless 5.1 and lossy 5.1/2.0 Spanish tracks and a host of other stereo soundtracks, together with a huge range of subtitle options.

The extras platter is included on both the 4K disc and the 1080p Blu-ray that also houses the remastered film are is made up of:

The only new extra is only 8 minutes and doesn’t amount to much more than an EPK for the new Scream. Disappointing all round given we’ve seen almost all of these on previous releases.

Scream remains one of the very best horror films of the last thirty years, its superb blend of real scares, rich character humour and genre smarts still an intoxicating blend to any genre fan.

And after years of previous releases suffering some less than stellar transfers, this new 4K disc finally gives the film the nicely textured and organic presentation it so richly deserves. More effort on the extras front would have been nice, but with everything we would want to know about the film already available and out there, this release was all about that transfer and Paramount have well and truly delivered the goods in that department.