Take Jigsaw on. If you dare... 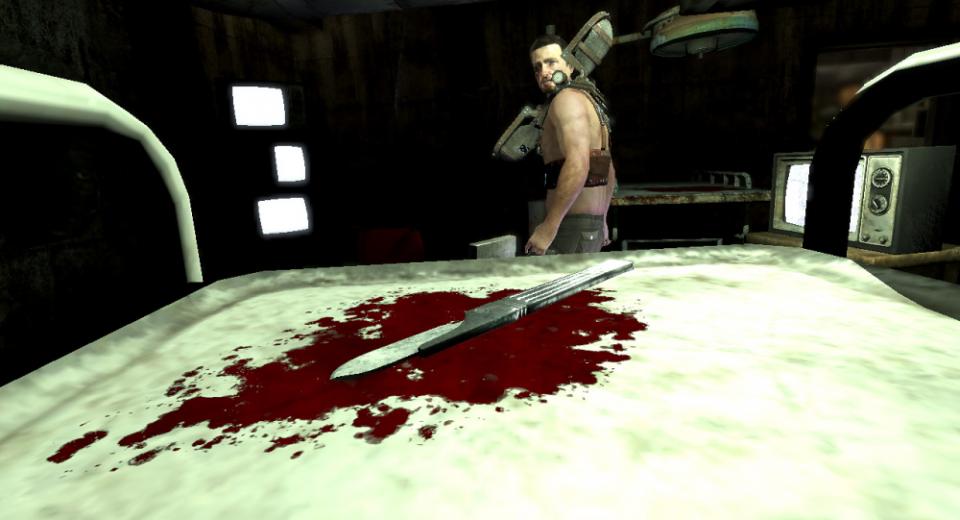 Who says there’s an economic downturn going on? Well, Konami certainly don’t seem to be affected or put off their stride as they have been putting out some strong titles, with Pro Evolution Soccer 2011 and the new Castlevania landing in the same week. As stated in previous reviews, this shows how Konami are going from strength to strength, whilst their development teams’ creative juices are very much flowing.

There has been relatively little in the way of screenshots or teasers for SAW II which seems understandable judging by how underwhelming the first SAW game was, so many of you will probably be surprised when you see it on shelves in game stores this week. If Konami have corrected the old bug bears, vamped up the graphics and created an intriguing story then surely they should be confident in the product that they are shipping out as we speak?

The SAW franchise is one that is dominantly associated with the film industry and has attained much critical success, and failures, across the board. The games on the other hand, have just been scrutinised, with the first game selling relatively few copies and receiving mixed reviews. But, Konami haven’t been fazed, and they have seen that a sequel (or prequel however you look at it) is in order. There is a gap in the market for SAW though as there aren’t too many acclaimed titles of its type (Horror/ 3rd person action adventurer) around at the moment so, if done right, there’s potential to be recognised for rivalling the likes of Resident Evil in terms of scares and gameplay. On the other hand, if there are the same problems that existed in the first game, such as poor gameplay and graphics, then this will be as unappealing as its predecessor.

When it comes to making a memorable entrance, SAW II takes the biscuit in front of any game this generation, even beating Call of Duty: World At War. The game opens with the player caught in a terrifying puzzle/trap that has obviously been applied with the intent of killing you, and you’re stood next to an X-ray machine that shows a skull with a key underneath the right eye socket. It becomes apparently clear that the protagonist has stitches under his eye, no clues as to where the key is and how it should be obtained. The scenario ends with you cutting your own face to obtain the key which will unlock the trap you found yourself stuck in. This sets the overall tone for SAW II as it doesn’t get any less gory, but unfortunately the graphics of such animations reduce the tension somewhat.

Flesh & Blood is set between the 2nd and 3rd films and grants you control over Michael Tapp, son of the detective David from the original SAW film. Playing through the game unravels information and details as to what happened to your father and how he came to an untimely end. Once again, you find yourself under the torment of psychopath Jigsaw in a house of horrors, with the frequent appearance on TV screens of Billy the puppet. In order to acquire said information, you must complete perverse puzzles that see you sticking nailed posts into people’s heads and fishing for a rusty nail in a toilet full of used needles. At this point you must be thinking, ‘why on earth would I want to do that?’ To a certain degree you’d be right in thinking this, but Konami have done it in such a way that it makes you want to see what will be thrown at you next, an element that has undoubtedly been taken from the films.

There’s nothing stunning about SAW II when it comes to its overall presentation as surfaces look generic in places, as do some of the level/puzzle designs. As with the opening sequence, sticking a nail into an adversary’s head is not very well animated as there’s no blood or evidence of puncturing their skull. Equally below par is the actual animation and movement of those you encounter, which are all stinted and similar to one another, with fight sequences all taking the same structure. Each death sequence for Tapp is the same for each individual puzzle, regardless of how far you have progressed through it and the overall effect is rather frustrating, especially when you consider the long loading times you encounter. The rest of the animations also happen rigidly and identically, such as opening a closed door; you can bet he’ll always rag it open, without a bang or clatter I may add, with the same hand no matter if it’s a push or pull door.

You have to commend Konami though as you’ll never, or very rarely at a push, come across any drops in the frame rate and neither will the screen tear when things get a little hectic. This is a big bonus as this is an issue that is seen in many major titles (just look at Fallout: New Vegas) so there’s nothing in this respect to spoil your playing, apart from the odd argument you can have with the rigid cinematic camera which is often reluctant to move. There’s limited tension building when it comes to the musical score, and moments where you must react quickly to avoid death could be heightened to make you feel more aware of the dangers around you.

It’s hard to rate a game of this type based on its mechanics as there’s very little variety or action to partake in, the majority of your time is spent solving puzzles to unlock the next area in which to progress. All these puzzles are very interactive and many of them are well structured and vary in difficulty, some taking several attempts to solve. This is probably the most enjoyable part of the game as there isn’t much to fault about the majority of them, especially the lock-picking sections which is one of the best and immersive around. Some puzzles are too easy though, like finding an unlock code for a door on the wall through the spy hole, which is always written in blood, as are the rest of the hints throughout the game.

The sections where you control Michael are actually easy to complete as the character control seems very solid and neither a chore nor too light. That said though, there is never a time where you will find yourself in a hectic situation surrounded by enemies that need taking out in order to test your control. You could try to run away in such a situation if it cropped up, but you’d find yourself muddling along as opposed to running when holding RB down, feeling as if you’re wading through custard. The only major gripe you may come across is with the sections where you must traverse a beam you must balance your way across. To do this, you must alternate the right and left triggers to replicate alternate footsteps, which may sound good, but you must also use the left stick in order to maintain an equal balance across the beam. This is the downfall, as no matter how far you press the stick in the desired direction to alter your balance, it seems very slow and reluctant to respond to this input and results in you falling off the beam. You could find yourself doing these sections ten plus times as they feel broken, and to add to your woes you must sometimes cross the same beam in the opposite direction straight after.

Even when you do encounter an enemy, Konami have focussed far too much on filling the game with Quick Time Events (QTE) at every opportunity. Floor about to give way? Let’s put in a QTE. Need to dive out of the way of an enemy attack? Yeah, another QTE will be fine. There’s nothing new or refreshing about the thought process of creating these sections and QTEs feel very old and worn out these days. There’s little evidence of a Heads Up Display (HUD) throughout the game, bar notifications of new items acquired or the completion of a given objective. This does not help in instances where you want to know how much health you have left, as you can only take three or four hits before you are killed, you are only warned when you are about to die as opposed to having a constant health bar on screen. To heal yourself, you must find health hypodermics in medicine cabinets scattered amongst each level, which don’t crop up often enough to make you feel comfortable, which heightens the tension as you never know when your next enemy will spring out at you.

If you stick with SAW, despite its roughness around the edges, you can probably finish the main story within five hours or so, maybe more given the amount of times you’ll have to replay certain puzzles. Adding to its replayability, Flesh & Blood has four collectibles for you to find; Puppets, Jigsaw pieces, Case Files and Audio logs. Each have varying quantities, with the puppets low in numbers but harder to find and more difficult puzzles hiding them away. The other are scattered around the sections of the game you will play through and you’ll find them quite easily for the most part and there are achievements for finding half and the full amounts of the collectibles, so those who are addicted to boosting their Gamerscore will find themselves spending longer here. This is as far as the appeal goes though, as unsurprisingly, there’s no multiplayer element to SAW II and it would be ruined if there was as it would probably be poorly implemented.

So whilst there’s nothing that wrong with SAW II: Flesh & Blood, it’s hard to see it selling well or standing a good chance of holding your attention for very long considering the big titles that have been released recently, such as Fallout: New Vegas and Vanquish. It is a definite improvement over its predecessor, but still fails to inspire with any new ideas or gameplay and will more than likely end up amongst those far worse titles in the bargain bin within the next few months.

Konami prove that when placed in the wrong hands, a well-known franchise can be well and truly messed up when it gets an outing on consoles. Flesh and Blood has the potential to exploit the market based upon its gameplay and appeal but it falls well below the mark in more places than one. With agonising load screens and poor graphics, you could be mistaken for thinking that this is a previous generation title being peddled onto the current generation. If it's scares you're after then you'd be best looking elsewhere.