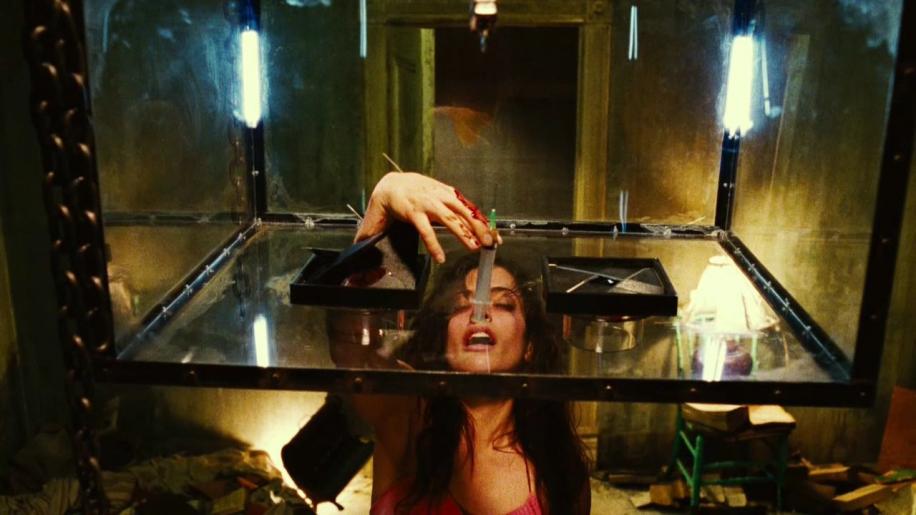 Much better than the grainy Saw 1, Saw 2's picture is much improved. This is just as well as Saw 2 has some pretty shocking stuff to show. Detail levels are rich; each flake of rotting paint on the dilapidated walls is there to see as is every drop of splattered blood. Colour is muted to a degree, but this is more of a setting thing than anything else. Shadows are detailed with little artifacting that I could see. Viewing on an LCD display revealed that a good deep reproduction of blacks is a must for this movie, too, as the LCD couldn't quite show everything. Saw's soundtrack was truly exceptional, but for some reason, the sound in Saw2 is mildly disappointing. I wouldn't say that it is poor, but there is a distinct lack of sparkle. Now it could be because my system is in transition at the moment, though I would never say that my rig is poor. But even the opening Twisted logo lacks bite. Vocals are still okay, if sometimes a little chesty. Bass is metered out adequately filling out the soundstage well alongside some lively action from the rears. This is an EX soundtrack with some margainal gains from the extra channels. I will say that the original Saw's Dolby track still had more expression than its sequel, mind. One thing that still is good is the score. That building string section towards the end of the first movie is back and is just as evocative as ever. Commentary is fine, explaining some things that the director left in the movie. Basically if you are a (very) lateral thinker and are observant enough (think Mycroft Holmes, here), you can work out the ending. Otherwise, just sit back and listen to the sometimes entertaining anecdotes. There was mention of a director's cut of this movie mentioned within the commentary, to which is interesting if expected.

The Traps of Jigsaw is pretty good. You see some stunning pre-vis artwork alongside some very effective prosthetic work. The needle pit was of particular with a ludicrous 130,000 syringes de-needled and re-fitted with fibre optic cabling.

Otherwise the extras are a little plain and none too exciting. Saw 2 is certainly no worse than the original, but I found the focus on gratuitous death a little repetitive, not only from the first movie, but within the sequel itself. Saying that, Saw 2 is not a poor movie and those looking for more of the same will no doubt be catered to. That this quality of production for $4million is attainable in the US is even more remarkable. I must say that if the franchise if to survive, a more subtle and subversive mechanism should be found than the rather contrived ones in Saw 2.