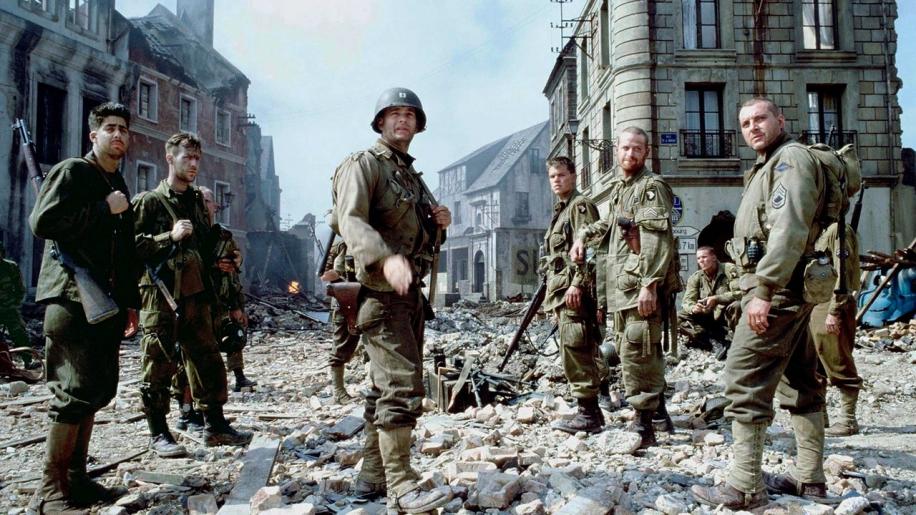 Presented in anamorphic 1.85:1, the image comes across exactly as the director intended, and as such this is a difficult print to comment on. Unique in its style, grain and scratches are evident throughout many scenes, with skies crawling and detail in the murky American uniforms looking lost at times. This is, however, clearly the intention, with the “documentary” feel of the theatrical presentation coming across well, and in other scenes it's worth noting that detail is retained well (see the “night in the church scene” for a good example of this).

The film itself is almost devoid of any colour, and all of the scenes have a washed out, almost monochrome appearance which is - again - faithful to the original presentation.

Overall this is an excellent video presentation of difficult source material, and probably the only criticism I can throw at this edition is the appearance of edge enhancement. Whilst not particularly distracting (the staccato style of cinematography will lose many erroneous print defects) and apparent only in scenes where we see figures framed against the skies, it is there nonetheless if you care to look.

Comparing the Region 1 dts edition and this Region 2 version reveals no distinguishing differences between either: the region 2 doesn't seem to have suffered in any way from the inclusion of both the Dolby Digital and DTS soundtracks (the Region 1 version contains the DTS soundtrack and nothing else), and for all intents and purposes, they are identical. The detail in both Dolby Digital and DTS mixes is very revealing: even though the air is often full of thousands of bullets, it feels like you can hear every single one of them landing around you. It's often a chaotic mix, but it's a testament to the strength of this soundtrack that even in these moments the smaller details can be made out. Voices do sound muffled at times though, and if you find yourself straining to make out some of the dialogue it's for good reason, as this is exactly as it was in the theatrical presentation.

The quieter moments here are a joy also. Always engaging, the full 5.1 channels are filled with ambient noises - witness the night in the Church, where the muted conversations in the high-vaulted room echo around you, with the sounds of distant shells bursting in the background. It's literally dripping with atmosphere.

Music is sparse but well placed, and is of a suitably sombre tone, and serves to compliment the overall soundtrack.

But of course, you already (likely) know this, because the big question for this edition hangs over the sound formats on offer. Previously the only way to view Saving Private Ryan in DTS was on the Region 1 DTS-specific version, which came devoid of any extras (and only carried the DTS soundtrack: Dolby Digital is available as a separate edition). Comparing the two reveals no perceivable differences in either DTS track: they sound identical. However, those who have only heard this before in Dolby Digital will be dying to know what all the fuss is about the DTS track. Always championed by the fans, the DTS track here reveals itself to be more aggressive than it's Dolby counterpart: LFE in the many battle scenes has more extension, with the effect of it feeling “punchier”, extending those couple of extra hertz lower. The surround mix, too, is different: slightly louder certainly, but as the individual bullets fly over your shoulder they actually sound clearer and sharper. It's not always immediately apparent, however, and indeed it's the action scenes where the differences are most telling.

The Dolby mix is by no means poor, and given either you will not be disappointed. Reference quality both of them, even several years after release, and you'd be hard pressed to find a recent soundtrack that can better the ones here. Given that this Region 2 edition is 2-discs, it's a shameful disappointed that the extras on offer here are rather lightweight. Although interesting, the 30 minute “Into The Breach” documentary is a repeat of what can be seen on the earlier released Dolby Digital edition (both R1 and R2). It contains interviews with veterans of Omaha beach, as well as an insight into Spielberg's early influences, and a few aspects of the production: sadly it tries to cover so many areas that it doesn't cover any of them with any authority. Much more satisfying would be separate documentaries on the history of D-Day, the shooting, the cast etc, so this is a missed opportunity.

Otherwise, we have the usual cast and crew biographies, static production notes and two theatrical trailers which are presented in Dolby Digital 2.0 and non-anamorphic widescreen.

Is that really all they could find for the second disc? It smacks of laziness! Your decision to buy this will largely come down to the sound format of choice: if you already own the Dolby Digital edition then this only offers DTS sound, with the extras being a repeat of previous editions. But oh what a corker of a soundtrack...