Goes out of its way to be authentic 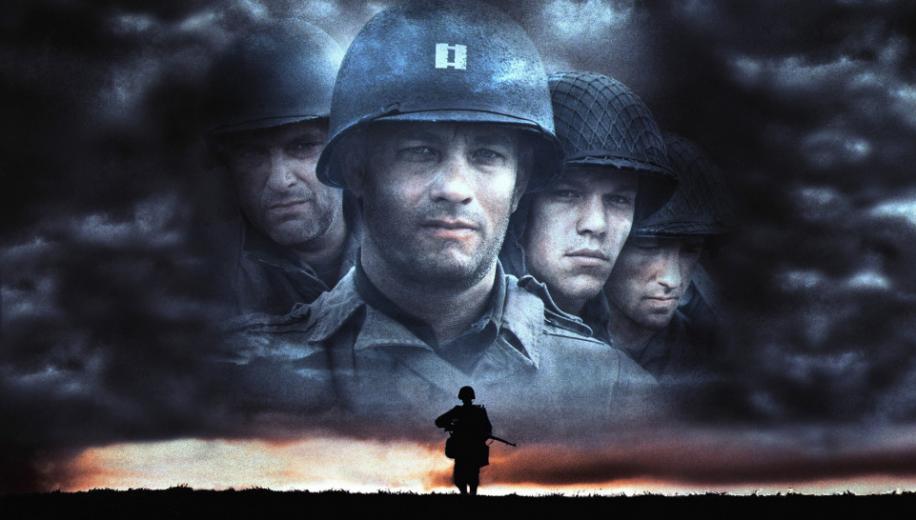 This time the mission is the man

Saving Private Ryan changed the face of the modern war film. The opening 30 minutes, the depiction of the D-Day landings on Omaha Beach, was so realistically portrayed, so visceral and emotionally draining it left everything that had come before in its wake. Whilst the story itself is told in the title, it took Spielberg to really get the characters and tell the compelling story within the tragedy of the war. It is a testament to the power of the film that it still resonates. Never belittling the actions, nor preaching, the film simply tells a story, warts and all, and because of Spielberg’s courage the war on film landscape shifted, much of it for the better, unless you have experienced combat, then you relive the nightmare.
Tom Hanks takes a leading role, a hardened soldier, responsible for his men, but making on-the-fly life-costing decisions, hinting a life before, and a life to return to , but unsure if it will ever be possible. Indeed the entire squad sent to find Private Ryan, have a hard job of it. This is not a film with a happy ending, but one for remembrance. It is littered with star faces, and everyone gives a terrific performance. Indeed it is almost a perfect storm of effects, music, story, editing and cinematography. Is it entertaining? That I’m not sure about, it is certainly enthralling, engaging and exhausting – it makes you feel and that must surely be true cinematic art. 
There is simply more on show

Detail is extremely good and a step up over the Blu-ray, when you look at skin texture and clothing weaves. The sand on the beach, the crashing waves, the imperfections on the metal defences – all are clearer and have greater definition. Inland the fields of overgrown grass, trees and other fauna and slightly better defined, while the engines of war stand out with greater resilience; check out the ammo cases, the sheen on weapons of the grain on wooden stocks. Overview shots hold cleaner edges too. When we come to the HDR and WCG, even though the film has been desaturated, there is simply more on show - the depth of colour to the uniforms, or in the greens of the fields, or in the blues of the skies. Fire has more range and consequently depth into the fames is increased. This only ever softens as a consequence of the original film-stock and not the transfer.

Black levels have an increased range so there is more going on in the shadows while adding significant depth to the frame. I felt the blacks did weaken a tad in the church scene, the frame did seem to shorten, but overall they are a marked improvement. White level is clean and again holds more detail, excepting when there is none to begin with – some of the skies are devoid of clouds, and occasionally foliage can be missing. However, this is insignificant to the whole, which is simply more expressive compared to the Blu-ray.

The source is clean and tidy, there is a good layer of grain and for the most part is nicely organic – it did crawl a little right at the end just before the dissolve of young to old Ryan. Digitally there is nothing to worry about. The English Dolby Atmos track is an absolute triumph of sound engineering. The previous 7.1 track was terrific, but the extra layer adds a sense of realism that is palpable. Taking the opening scene as an example: the crashing of the waves, the gunfire, the explosions, the shouts, screams and yells, the shell impacts, the ricochets – everything about the sound is placed with pinpoint accuracy within 3D space so as to put the listener inside the battle, and it is a terrifying place to be. Indeed the surround environment is so real, with the visual acuity being so detailed, that you experience a profound sense of horror as the true scale of the event unfolds. It is true that many war films have since emulated this opening scene in terms of authenticity and surround environment, but this was the first and I believe it has yet to be beaten.

Quieter moments are just as authentic with fields of grass swaying in the wind, or birds chirping with the ever present thump of shells in the background. When it starts to rain, you are drenched in a sound so realistic as to put up umbrellas. Listen to the echo on the gramophone around the wartorn landscape of Ramelle during one of the quieter moments. Dialogue is well layered into the mix, never getting lost and sounding very natural, while the score makes good use of the surround environment. Bass is tight and strong, never over the top, but adding impact and density to everything, from tank movements to gunshots. It is a visceral experience and one that leaves your heart in your mouth. All the extras are found on the (included) second Blu-ray disc.

Shooting War – A feature length documentary, narrated by Tom Hanks, looking at how WWII was captured on film.
Introduction – 2 minutes with Spielberg sharing scenes from the World War II films he shot as a child, his fascination with the era, and the picture's place in film history for the veterans who fought in the war.
Looking Into the Past – 4 minutes with Spielberg, his research and approach to the film.
Miller and His Platoon - 8 minute feature examining the collaboration between Spielberg and Hanks.
Boot Camp – 7 minutes looking at the cast's physical and military training for the film.
Making Saving Private Ryan – 22 minute feature with Spielberg talking about style, the film experience and it’s place in his (at the time) repertoire before moving to the cinematography and authentic look.
Re-Creating Omaha Beach – 20 minute making of, concentrating on the authenticity and realism of the sequence and how it was achieved.
Music and Sound – 15 minutes with John Williams on the role of music, and Sound Designer Gary Rydstrom speaking on battle scenes being more authentic without music and his research into most realistic sound possible.
Into the Breach: Saving Private Ryan – A 25 minute making of feature that covers all the bases from veteran and historian interviews to inspirations, training, themes, realism etc., some of which is covered above.
Parting Thoughts – Hanks and Spielberg finish off with some personal thoughts on the film’s themes.
Theatrical trailers Saving Private Ryan is Spielberg’s foray into the war film; the title tells the story, but it is so much more – an enthralling, engaging and exhausting experience that goes out of its way to be authentic, but never preaches or panders, and in doing so become a powerful rendition of the horrors of war. Well-acted, expertly crafted and intense, Saving Private Ryan, changed the cinematic landscape for war films and left all before it in its wake.


A powerful rendition of the horrors of war

The 4K UHD set from Paramount is excellent; the native 4K picture is beautifully film-like in its representation, easily surpassing the Blu-ray in terms of detail, colour rendition and black level. The Dolby Atmos surround track awesome – a frighteningly real track full of energy and impact that beggars belief. The extras package contains nothing that hasn’t already been released, but is nevertheless impressive, shame it’s only in SD.