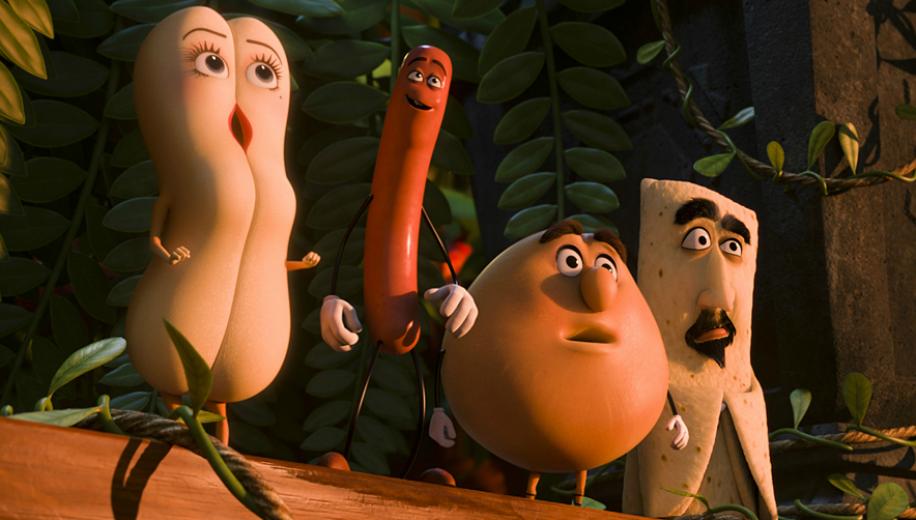 Despite it's puerile title, Sausage Party is a surprisingly sophisticated take on organised religion with an A-list voice cast and plenty of offensive humour.

Although the film almost looks like a Disney/Pixar or Dreamworks animated feature with its story of a frankfurter sausage's quest to discover the meaning of life and save his friends, this is definitely not for children. Sausage Party was written by Seth Rogan and Evan Goldberg who previously wrote and directed This is the End, so you have a rough idea what to expect with their particular brand of adult humour. The result is an animated film that is full of crude obscenities and lewd behaviour, not to mention plenty of laughs along the way. The idea stemmed from a joke Seth Rogan made about being able to pitch a movie called 'Sausage Party' based purely on the title and it looks as though he succeeded. The other big joke is the idea of using high quality computer animation in film that's wall-to-wall swearing. Sausage Party's conceit is that food is actually alive and worships the shoppers as gods. To the food in a supermarket, being bought and taken home by the shoppers is akin to going to heaven and since no food ever comes back, they're oblivious to the reality of what happens to them once the shopper gets home.
There's a fantastic musical number at the start of the film that lays out the basic premise before the main plot kicks in. That centres around a sausage called Frank (Rogan) and his quest to discover the truth, save his girlfriend Brenda (Kristen Wiig) and warn the other food about the awful truth. Of course certain foods, the imperishables, know the truth and created the food's religion to spare them from being terrified and traumatised by the reality of their fate. And that's were the film really surprises as it shows the true nature of organised religion, how the message can get twisted and changed over time, the ridiculous way that certain factions of the same faith can hate each and different faiths are unable to find common ground. Some of the jokes and ideas are delivered with the subtlety of a sledgehammer but it's still refreshing to see such sophisticated concepts within the guise of a gross-out comedy. Much of the animation is very good as well and as long as you're not easily offended you might find that Sausage Party is one of those rare films that can make you laugh and think at the same time. Sausage Party was animated at 2K, the digital files for which which presumably formed the basis of this Ultra HD Blu-ray release. The film is presented at a resolution of 3840 x 2160p and in its correct 1.85:1 aspect ratio, the disc uses 10-bit video depth, a Wider Colour Gamut (WCG) and High Dynamic Range (HDR), and is encoded using the HEVC (H.265) codec. We reviewed Sausage Party on a Panasonic TX-58DX902B Ultra HD 4K TV with a Panasonic DMP-UB900 Ultra HD Blu-ray player.

Since the film was only animated at 2K there is no real difference between the Blu-ray and the Ultra HD Blu-ray, with both looking superb in terms of the levels of detail. Although the animation isn't quite the equal of the best Dreamworks or Disney/Pixar films, it's still excellent with plenty of imagination on show. The UHD Blu-ray delivers every pixel in wonderful detail and the use of 10-bit video means that the image is free of any unwanted banding or other artefacts.

Where the Ultra HD Blu-ray really improves over the regular Blu-ray is in terms of the use of High Dynamic Range and Wide Colour Gamut. The images really pop off the screen in HDR with the added range revealing fabulous detail in both the bright highlights and the shadows. The blacks were impressive, the contrast performance excellent and the overall extension of the dynamic range really gave the animation more impact. The use of HDR also gave far better perceived definition to the animation, often making it appear more detailed than the regular Blu-ray.

Once you added in the wider colour gamut the results were particularly impressive, with the bright primary colours of the animation really taking full advantage of the greater colour palette on offer. The resulting increase in both the colour gamut and the dynamic range resulted in images that really jumped off the screen, giving colours far more vitality but also greater subtlety than was possible with the normal Blu-ray. Despite being made on a relatively small budget, Sausage Party delivers a great image that makes full use of all the benefits of UHD Blu-ray to enhance your viewing experience. Sausage Party was released theatrically with a Dolby Atmos soundtrack and that has been used for this Ultra HD Blu-ray release. We reviewed the UHD Blu-ray using a Denon AVR-X7200WA AV receiver and a 7.2.4 immersive audio setup. As with any animated feature, the soundtrack is built from the ground up with every effect being created by the sound designers. There's the actors' voice tracks of course, which form the basis of the soundtrack and then the sound designers add in the rest of the mix using music and effects entirely created from scratch. The result is a marvellous sound design that takes full advantage of the object-based nature of Dolby Atmos to create an immersive audio experience.

The dialogue is clear and detailed of course and anchored to the screen within a wide and open front soundstage that uses the front three channels very effectively. This front soundstage delivers the marvellous score equally as well with the instruments localised across the front and even being mixed into the top front channels as well. There's a wonderful mid-range and high-end, along with lovely clarity and detail, resulting in the opening song in particular being a real audio highlight. The overall bass and the specific low frequency effects are also excellent, underpinning the soundtrack and providing certain scenes with greater impact, whilst always remaining well integrated with the rest of the audio.

The effects are steered around the room and within a three dimensional hemisphere of sound with remarkable precision. The result is a sound design that enhances the viewing experience, emphasising the physical comedy and bringing the various action sequences to life with real fun and imagination. A good example is a scene that parodies the Omaha Beach sequence in Saving Private Ryan, although there are plenty of other scenes where the sound designers get a chance to use the opportunities provided by multi-dimensional audio to their full extent. Overall this is a great soundtrack that, along with the film itself and the Ultra HD picture quality, is another nice surprise.

As is normally the case with an Ultra HD Blu-ray release there are no real extras on the Sausage Party disc itself, aside from Sony's "Moments" section which is fairly useless and just provides quick access to a collection of four specific scenes. All the other extras are on the included Blu-ray but as is becoming annoyingly common these days, not all the available extras are on the disc. Aside from the fact that the included extras are fairly limited and there's no commentary track, there are also extras that are available for digital download but haven't been included on the Blu-ray. Specifically two alternative endings and a short featurette about those endings are all missing, which is really annoying. The features that are included are in all high definition and are:

Good Food Gag Reel (07:29) – The usual collection of messed up lines and laughter (mainly from Seth Rogan) as the voice cast record their dialogue.
Shock and Awe: How Did This Get Made? (05:11) – A short featurette about the genesis of the film, how Rogan and Goldberg struggled to get funding and how the film was eventually produced.
The Booth (09:28) – A slightly longer featurette that concentrates on the voice cast, the personalities of their various characters and how they recorded their lines.
Line-O-Rama (04:57) – The usual selection of alternate lines to certain scenes, most of which aren't as funny as the cast seem to think they are.
The Great Beyond (04:01) – This short featurette covers the music of the film and particularly the main song – The Great Beyond – the music for which was actually written by Alan Menken who also wrote the music for Beauty and the Beast and Aladdin.
The Pitch (02:33) – A vintage interview with Seth Rogan and Evan Goldberg (from the set of Superbad by the looks of it) where Rogan first jokes about pitching a film called 'Sausage Party'.
Seth Rogan’s Animation Imaginatorium (01:04) – A trailer for Sausage Party done by Seth Rogan in the style of Walt Disney promoting one of his animated features. Sausage Party wears it's ambitions proudly on its sleeve and makes no bones about its intention to mix strong language, lewd situations and offensive behaviour within the structure of a children's computer animated feature. An A-list of comedic voice actors lend their talents to Seth Rogan and Evan Goldberg's project, whilst a team of very capable animators deliver a film that could almost be a Pixar movie were it not for all the swearing. However within all the gross-out humour there is an interesting message about the nature of organised religion and the result is a film that stimulates your brain as well as your funny bone.

The Ultra HD Blu-ray release delivers a great picture and despite the fact that the film was only animated at a resolution of 2K, the use of Wide Colour Gamut and High Dynamic Range really add to the experience, bringing out every detail of the excellent animation. The Dolby Atmos soundtrack really adds to the experience, enhancing the visuals and taking full advantage of the multi-dimensional capabilities of the format. The only disappointing aspect of the release are the extras, which are limited and missing the alternate endings available with the digital download. However the film itself is great and the picture and sound quality certainly make it an Ultra HD Blu-ray that's worth picking up.