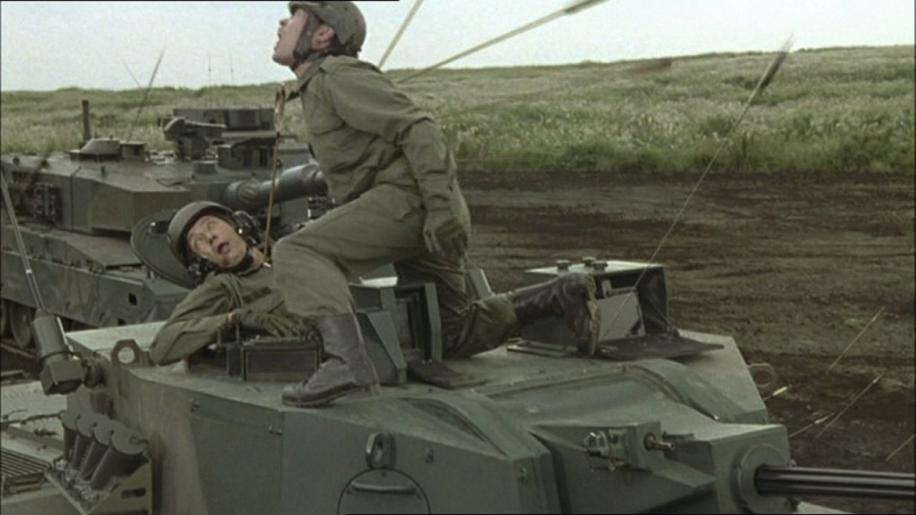 The Disc has been given a theatrically correct 1.85:1 aspect picture that has been anamorphically enhanced for widescreen TVs. Oh dear, it's all rather flat and dull I'm afraid and the chances are its all from the original print. The picture comes across with drab colours all centred around the brown hue, even flesh tones. This is not helped by the poor setting of the contrast and brightness giving some distinctly dodgy blacks, the entire picture is rather grey and lacking any depth. The detail level was rather soft too, no distinctive edges anywhere, add to this some terrible low level noise inherent in the 'blacks' and the whites things really start to look bad. It is a little difficult to see, but screen grab too has some awful noise in the background. Thankfully this was the only digital compression artefact, edge enhancement was never going to be a problem with such a dull picture, though there were some spots of print damage and film grain to contend with. It's not the worst picture I've seen but its pretty darn close. No such problems with the sound though, there are two tracks to choose from Dolby Digital and DTS 5.1, both Japanese. Both tracks are very good and are immersive right from the off. There are plenty of surround effects and separation is excellent. Tonally the Dolby track was lacking a little bass (no surprise there) but its middle too seemed a bit low when compared to the DTS which managed to sound far more rounded in terms of the mix. Dialogue was a little thin on the Dolby compared to the DTS too. However both suffer from a low end rumbling, when turned up you realise this is actually drumming on the score, but at normal volume levels sound like a insistent hum, it is more pronounced in the DTS track due to the higher bass level inherent in that track, its not too distracting, but a clearer distinction to the score would have been far more preferable. A small niggle in what is an otherwise excellent pair of tracks. I picked the DTS as the better track due to its better and more enveloping mix, but the Dolby is no slouch. Subtitles are in a rather small white font towards the lower middle of the screen, they are in time and grammatically correct for the most part. The first extra is entitled Cast Greeting: Screening a somewhat misleading title as the featurette is actually a video diary of the real SDF's road trip to the premier of the film. Quite an unusual extra this, I've not seen anything quite like it, we are introduced to the sergeant in charge of making sure all the heavy armour vehicles navigate through the streets and complete their dress rehearsal in time for the actual premiere later that night. It is presented as 1.33:1 digital video, bright and solid, refreshing change from the drabness of the main feature; I actually quite enjoyed this extra.

Next up is the cast interviews, each of the main cast gests a few minutes screen time to talk about their character and their motivations. The screen is a mock up of the computer screens of the main feature so the actual talking head is quite small in the centre, watchable if not entirely unseen feature.

Moving on to the interview with the director Masaaki Tezuka, being interviewed with a member of the SDF as well. Fair amount of information is given, a little about his past films, as well as this one, includes some directing challenges, such as filming horses with tanks etc, short but entertaining.

Next up is a lengthy interview with author of the original comic strip on which the two films are based Ryo Hanmura, he discussed quiet a lot in his interview from past projects, the inspiration and deliberate thoughts for this film and well as more diverse subjects and motivations. Felt this one went on longer than it should.

Finally there is the theatrical trailer, huge burnt in subtitles, terrible quality, but manages to get the message across. All the other featurettes are in Japanese and have removable English subtitles. I thought I'd enjoy Samurai Commando, the premise and cover lead me into a false sense of security, actually the film is quite dull. Over extended scenes and seriousness of the piece override the plainly fun aspects of the battle scenes. As a DVD, the package is let down by a very poor picture no matter who good the extras and sound. Not much to recommend here I'm afraid.