Some niggles but mostly it's business as usual 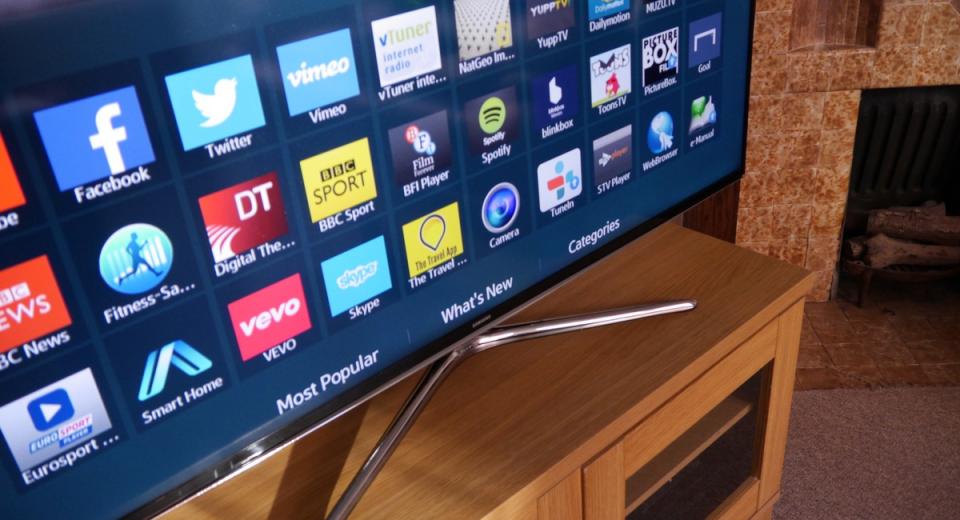 It’s yet another mid-tier Smart TV from the Korean manufacturers and we’re starting to think they’re now inventing new models, specifically to be reviewed by us. In the last few weeks alone, we’ve reviewed the UE55H7000, the 40-inch H5500 and UE40H6500 but we’re not complaining as they’ve all been great and it keeps us out of mischief. The H6200 is towards the bottom of Samsung’s 6 Series range but still boasts the full Smart TV suite, 3D technology and Quad Core processing. The suggested price of this TV is £1,299.99 but at the time of publishing (December 2014), you can pick up the UE55H6200 for around £700, which is a lot of screen for the money!

You’ve probably seen this design as it’s been doing the rounds for the last two or three years. The most distinctive element is the chrome quad-footed stand, which contrasts the discreet narrow bezel surrounding the gloss black screen. At 64mm thick, the 55H6200 isn’t the skinniest TV we’ve seen but the current (and welcome) trend is for direct LED backlighting, rather than edge mounted, which comes at a slight aesthetic cost. The H6200 is likely to have all the connectivity options you will need, including 4 HDMI ports, 3 USB inputs, a Freeview HD capable aerial terminal and an assortment of legacy video connections. There’s also digital audio (Toslink) and headphone outputs but the HDMI ports do have ARC (Audio Return Channel support), should you be hooking it up to a soundbar or other audio solution.

We were just slightly dismayed that the H6200 doesn’t qualify for Samsung’s excellent new Smart Touch controller but the standard issue remote supplied is competent enough. It’s larger than most we’ve seen from the company this year but it’s still easy enough to use with one hand and the button layout is easy to follow. Not a smart remote but perfectly serviceable

The Samsung Smart TV platform is enormous in its scope. It contains nearly all the best streaming services, and provides access to catch-up players from the BBC, Channel 4, ITV and Channel 5. Additionally, there’s an impressive USB and DLNA media player, a content recommendation engine, Skype capability and a very respectable web browser. Samsung are also increasing their focus on video games and you can use the Smart Touch remote to control some of them. If you can think of a Smart TV feature, then the Samsung UE55H6200 will probably have it! As you’ll see in the calibration section below, the out of the box Movie mode settings will be adequate for all but the most fussy. There was definitely a benefit to be seen from the calibration but the outlay involved in getting a professional out to do it for you might seem prohibitive compared to the cost of the actual TV. Still, if you want the best, there’s only one way you can get it…
Out of box Movie modes is pretty pleasing

The H6200 showed a typical Samsung performance in the unaltered Movie mode. That is to say there was a bit of a green tint to whites but, overall, it’s pretty accurate for a pre-set. The colours were even better, with only cyan displaying a visible error at full saturation levels. We had next to no difficulty in obtaining a reference level of accuracy in the greyscale performance, using a combination of the two and ten-point white balance controls. Having the 10 point option also allows the gamma response to be massaged to perfection so the calibrated H6200 displayed both perfect neutrality and tone in the greyscale. This makes getting the secondary colours to their targets that bit easier and with the fully-fledged colour management system on-board, there was again no issue in hitting reference performance here. The Samsung TVs are generally decent, rather than exceptional, TVs for gamers. The 6 Series and above routinely have input latency around the 40 milliseconds mark, which while not the best we’ve seen, should be adequate for most out there. You can get this kind of performance either by accessing the Game mode in the System Menu or by renaming one of the HDMI inputs to PC, using the Tools button on the remote, when the source input menu is displaying.

The general performance of the H6200 was very striking. We measured native black levels at around 0.04cd/m2, which compares favourably against most on the market, and from a chequerboard pattern the UE55H6200 achieved an ANSI contrast level of over 3,000:1, which is also impressive. Those deep black levels were somewhat spoiled by uneven patches of brighter light, spotted across the screen, although that wasn’t as evident when sat absolutely flush-on to the screen. Those viewing off-axis also don’t quite get to see the colours reproduced as well as anyone in the sweet-spot but that’s the price to be paid for a LCD panel with good contrast.

Otherwise there was really very little else to fault, with Samsung’s excellent processing chips handling both high and standard definition material with aplomb. The UE55H6200 handles 1080p24 material perfectly so Blu-ray discs maintain their filmic quality and even a DVD could look more than acceptable on the 55-inch screen. Despite the fact the video deinterlacing was also carried out very well, we wouldn’t advise watching too much broadcast standard definition material on the H6200, as even Samsung’s superior scaling engine is pushed beyond its limits with some of the unbelievably low bitrates the operators now employ.

The usual quality performance but with some irritations
The impressive accuracy of the out-of-box Movie picture mode means most won’t need to concern themselves with calibration, but obviously images were that bit more natural following adjustment. Beyond testing purposes, we never really found cause to use the motion processing of the H6200 but those that like the smoothed look are well catered for by some of the best interpolation technology available in a consumer TV. The major blight in motion was a dirty screen effect most noticeable on whites, but we could also see it on other colours, so the panning shots of action movies and sports broadcasts were somewhat marred by this blotchiness.

The H6200 is also a sterling performer with 3D content, although the backlight niggles with dark scenes became that bit more pronounced as its brightness level is quite dramatically raised in 3D mode. Colours were good, however, and motion handling smooth and mostly clean, although faster moving objects projecting out of the screen would sometimes show some crosstalk (double imaging). Samsung chucks two pairs of 3D eyewear in to the box of the H6200, which are amongst the lightest on the market, but you’ll need to make sure you get the curtains well drawn as they offer little to no protection from stray light, which can cause distracting flicker and reflections.


The UE55H6200 is another impressive TV from the reliable Samsung stable, displaying all their familiar picture traits of strong video processing, satisfying contrast levels and lifelike colour accuracy. There is also Samsung’s superbly expansive suite of Smart TV apps to play with, including virtually all the video streaming services you could wish for, allied to a web browser, media player, PVR features and more. This sample did have some weaknesses, however, with screen uniformity issues slightly spoiling the immersion factor but this is still a TV worthy of an AVForums Recommended Award with current price and market standing considered.

What alternatives are there?


At present prices (December 2014), you could investigate the 55-inch version of the Sony W829 which is another very strong all-rounder. Of the TVs we’ve reviewed in 2014, the HU6200 is really only currently competing, price-wise, with a sister set in the UE55H6400,which adds the excellent Smart Touch Remote in to the package but is otherwise highly comparable. You can get a wider sense of what you should be looking for, and what is available, by reading our collection of Buyers Guides.