This is where the curve makes sense - up close & personal 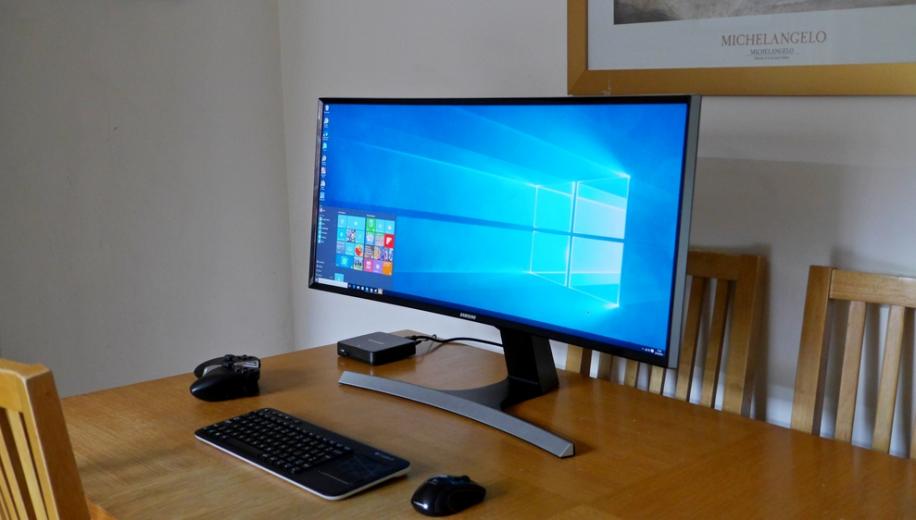 What is the Samsung SE790C?

The Samsung S34E790C is billed as a premium product and it carries a corresponding price-tag of £799.00 (October 2015) which backs that notion up. We have reviewed virtually all of Samsung’s curved televisions and whilst the picture quality has generally been great, we’ve never been particularly blown away by the curve itself. Even in the larger screen sizes, you have to be sat flush on, and relatively close, before it begins adding anything to the immersion factor. Things should be different with a monitor, however, where, in most instances, the user will be in precisely the right spot and we can see potential benefits in a number of applications including design, multi-document viewing and gaming. On the back of their reputation in the TV market, and the price, the S34E790C has plenty to live up to, so let’s see if it does.

This is one good looking monitor bearing more than a passing resemblance to their Home AV range with its brushed metal effect base-stand curving sympathetically to the screen. The screen is matte-black and pretty effective in dispersing reflections; it’s surrounded by a reasonably narrow 1cm, gloss black bezel which chamfers inwards to the screen. There’s a good degree in freedom in terms of positioning, as the screen can be tilted up to 20 degrees backwards and two degrees forwards from the default position, as well as being able to be moved up and down up to 12cm on a hand-operated sliding mechanism. All the connections are positioned at the rear and there are plenty of them; they include 2 HDMI ports, a Display Port input and an audio out jack. There’s also a selection of USB connections – a USB A for hooking up to a PC and 4 USB ports in a vertical column. You can use USB 1 and 2 for ‘ultra-fast’ charging and we have to say that does come in very handy. Also at the back is a jog wheel which is used to access menus, adjust volume and power on and off.

Pressing on the jog-wheel/joystick at the rear, bottom-right of the panel brings up a simple on-screen menu with four categories – PIP/PBP (Picture in Picture /Picture by Picture) which can be very useful if you’re working on more than one machine or if you want to get in some crafty TV watching whist your working (allegedly). There’s also the Source selection menu and the option to Power down. All of the key controls are located in the Menu section, of course, which is split in to five further submenus – Picture, Screen, Options, Settings & Information. The Picture Submenu allows you to set Brightness (screen luminance), Contrast (white level) and Sharpness. There are 4 options under the Samsung Magic Bright feature which we’d suggest leaving at Standard or Custom. The Colour submenu allows global control over the White Balance, Colour Tone and Gamma; more on those below. Aside from adjusting the Brightness control to suit the room - and a bit of personal preference - we measured the Samsung SE790C in its factory pre-set state against both the sRGB and Adobe RGB colour-spaces. Using Calman RGB monitor calibration software and a Klein K-10 colorimeter we also calibrated to both standards.

We can see from the two charts on the left, under the Pre-Calibration, heading that the SE790C was impressively accurate out of the box. The panel is more than capable of reaching the necessary colour saturations of the primaries (Red/Green/Blue) - in fact it’s a tad over-saturated in both red and green- but we can also see that various important colour points on the ‘colour checker’ graph on the left are being met, or at least close to it. The average Colour Checker error is 1.92, where below 3.0 is considered as being indistinguishable from perfectly accurate to the human eye. The RGB Balance Graph emphasises the out of box fidelity of the Samsung; in an ideal world the red, green and blue lines would all be tracking together on the zero point of the y axis but, as it is, there’s relatively too much blue and green energy in the greyscale with red dipping under. Still, overall greyscale errors are averaging just 1.58 so, again, any tint should be imperceptible. Using the auto calibration function of Calman RGB, as we can see from the charts on the right, produced virtually perfect results in both colour accuracy and greyscale, with average errors at 0.41 and 0.5, respectively. For those involved with colour critical work, calibration would definitely be worth the effort but for anyone else it’s not really needed.

As one would expect, greyscale accuracy in the Adode RGB colour space was similarly accurate to that in sRGB but the panel was not able to produce colours as wide as necessary for this colour space. To be fair, as the Colour Checker chart demonstrates, it didn’t make a bad fist of things but green could reach nowhere near full saturation levels and as a result, cyan – which is 50% comprised of green – was unable to either. More alarmingly green was a long way off being on-hue which would impact on those who need Adobe RGB accuracy. Better contrast than an IPS, that's for sure

The use of a VA panel reaps dividends over the many IPS based monitors out there in terms of dynamic range, black levels and contrast performance. We settled on a peak light output of just under 150 cd/m2 which allowed a minimum luminance level (black) of 0.069 cd/m2 producing an On/Off Contrast Ratio of just under 2,200:1. From an ANSI checkerboard pattern (alternating black and white squares), which presents a more realistic view of ‘real-world’ performance, the numbers diminish slightly, with an average peak light output of around 145cd/m2 against a black level of 0.079 cd/m2 producing ANSI Contrast of 1835:1; even the best IPS panels are unlikely to have half that contrast performance and it makes a big difference in bringing images to life. For reference, the S790C is capable of peak light output of a whopping 345cd/m2 which should be bright enough for virtually any conditions bar direct sunlight. The screen is also extremely well treated to combat reflections which helps maintain the impressive dynamic range in challenging rooms.

The Samsung SE790C is a great choice for gamers; using our dedicated Leo Bodnar lag tester we recorded a lowest input lag of just 13.5 milliseconds, in Game Mode. The downside of Game mode is that it isn’t as colour accurate and the gamma (luminance) is set undesirably, for us, high which might help with picking out enemies in the shadows but does nothing for the image quality. Input latency in the other modes was fractionally higher at just under 14ms, so we’d advise going with Standard with your desired Brightness setting. The input lag didn’t increase, using the ‘Fastest’ setting under the Response Time submenu in the Picture menu although some might find it more prone to flicker. We were more than happy with pixel response in the ‘Faster’ setting, in any case, with no obvious pixel lag (blurring) unless pushed very hard. Using the suite of tests on the testufo.com site, anything up to 1440 pixels per second at 60Hz looked more than acceptable

Despite the use of the VA panel and, some might say the curve, the Samsung SE790C has very respectable viewing angles indeed. You lose a little contrast and colour saturation immediately after moving from the sweet-spot directly in-front but you can then move somewhere between 40 and 50 degrees before they drop off significantly again. The same also applies on the vertical plane where there is an immediate loss of contrast and saturation the moment your head moves away from the centre but it then stabilises until you reach extreme - and uncomfortable - angles.

Bright screen uniformity of the Samsung SE790C was also very good, but probably the weakest point of this monitor was in its patchy dark-screen performance. Several instances of light bleed were noticeable around the edges of the screen when looking at very dark images and it’s not something we’d expect of a monitor costing nearly £800. This particular sample also had a column of dead pixels running around three-quarters of the way down the screen, too, which had this have been something we’d bought, we would have been looking to exchange.

An excellent all-round monitor for gaming, movies and work

With a mixture of strong contrast levels, impressive blacks and highly accurate colours you really can’t go too far wrong and the Samsung SE790C consistently produced images brimming with all those elements. Whether we were using it for movies, TV, gaming or for work based applications the results were equally as impressive with the curve actually making sense from such close quarters. With games, in particular, the extra information in your peripheral vision definitely adds to the immersion factor, albeit with the caveat that you do need to be sat no more than 2-3 feet away for the curve to really draw you in. The column of dead pixels didn’t really adversely affect the overall experience and was only really noticeable on certain, deep shades of colour and likewise the edge-bleeding only came in to play every so often. Still, these are not flaws we would want to tolerate having parted with such a substantial sum of money, so we hope Samsung can ramp up their QC efforts going forwards. All in all, however, this is one impressive looking monitor.

The 2 x 7w speakers on board the Samsung SE790C are certainly no disgrace and, given the width of the screen, produce quite an enveloping stereo soundstage. Dialogue was always clear and effects well localised although there is a certain thinness to the sound due to the lack of low end. If you’re one for listening to a lot of music through your PC you would definitely want to investigate an out-board solution but the headphone out does produce a decent output that can drive most mid to low end headphones pretty well.

The following measurements were taken with the Samsung SE790C displaying a full-screen 100% white pattern:

Should I buy the Samsung SE790C?

If you’re looking for a great all-round monitor with superb colour accuracy and impressive picture contrast, the Samsung SE790C makes for an excellent choice. The enveloping, curved 21:9 ratio screen also serves to draw you in to whatever pursuit you’re undertaking, be it games, movies or boring old work. Connectivity is good with two HDMI and one Display Port around the back and the SE790C also houses four USB ports – two of which can be used for ultra-fast charging of connected devices. The Samsung is a very good choice for gamers, too, with very low input latency and fast pixel response making for a silky-smooth experience. There were a couple of uniformity issues with a column of dead pixels and some edge-bleeding from the backlight but they rarely got in the way. That said, if it were our money, we would be looking to exchange on the dead pixel front but, provided all was well with the replacement, the Samsung SE790C would be a monitor we would be more than happy to use day to day. At £799, or thereabouts, it’s certainly not a budget option but quality like this costs. Recommended.