Stunning from any angle? 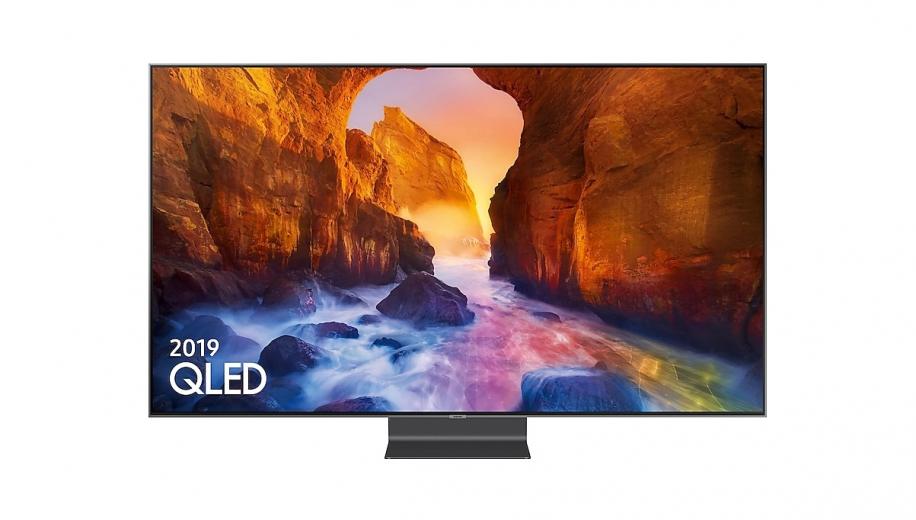 What is the Samsung Q90R?

The Q90R is an LCD TV that uses Quantum Dot technology to provide the panel with a wide colour gamut. Samsung’s marketing title for these TVs is QLED and as such many of the technologies incorporated into their TVs also have a Q title to tie it all together.

New for 2019 is the Ultra Viewing Angle technology, which improves the VA panel's off-axis viewing angles so colours and contrast remain consistent to a far wider viewing angle than other VA LCD panels. This promises to bring the Q90R closer to an OLED TV which can be viewed from any angle without a large drop off in contrast and colour fidelity. The technology, which uses a technique similar to that used by Sony in their ZF9 LCD TV, focuses the LEDs in the backlight more precisely and also uses prism-like filters to direct that light horizontally and vertically to improve the viewing angles without affecting the contrast and colour performance. With the Sony though, it also impacted on the black levels and contrast performance but Samsung state that their technology is superior, using the local dimming algorithms and AI processing to keep contrast and black level performance high.

The new Ultra Black Elite (moth eye) screen filter has also been designed to help with rejecting reflections and ambient light in such a way that it retains the contrast performance of the Q90R even in very bright rooms. If you position the Q90R opposite a bright light source, such as a window, you will see striping and rainbow-like RGB colour effects caused by the filter. This will not affect normal viewing and the solution is to remove any overly bright objects from directly opposite the screen.

Much of the advanced AI features we saw on the Q900R 8K have also made it into the Q90R 4K set. The Quantum AI Processor is now available in 4K and incorporates the AI machine learning upscaling which works in most picture modes (except with PC connections and some game mode settings). We were really impressed with this technology on the 8K set and no doubt it will have benefits within the 4K Q90R for upscaling TV, streaming services and HD Blu-rays to the native resolution of the screen.

The backlighting and local dimming have also been improved for the Q90R with less aggressive dimming algorithms and more advanced halo and blooming suppression. This results in a balanced image with more visible shadow detailing and less black crush with tricky scenes like those from Gravity and Pan.

Just above black and coming out of black have also improved so you now see exactly what you are supposed to see within darker scenes in film and drama content. We directly compare this with the Q9FN and more TVs in our video review below.

The Q90R is marketed as being HDR 2000 which suggests that the peak highlights should be around the 2000nit mark, although in previous reviews we have found the TVs to be just under these figures, so it will be interesting to see just what the Q90R measures in the most accurate movie mode. HDR10+ is the only dynamic metadata system employed on the Samsung flagship model, there is no Dolby Vision compatibility. HDR10 and HLG are the other flavours supported by the Q90R. The advanced AI also helps with what Samsung says is the director's intent when it comes to dynamic tone mapping of HDR10 signals but, in the past, this has meant the TV doesn’t necessarily stick to the PQ EOTF curve, but as it is dynamic there is no way to actually measure this fully. We will cover this more in the video review. HDR10+ content is now available on some 4K Blu-ray discs and on some shows on Amazon Prime. The old HDR+ setting, used to turn SDR content into HDR-like images, has been dropped on the Q90R.

Also part of the new advanced picture AI are the Game Enhancer features. Here we have VRR freesync, low latency mode and also a gamma adjustment tool, which lightens up the shadows so you can see what is hiding in the dark within certain games. The Q90R also auto detects a game console being used and switches to game mode.

The Smart TV system remains the same as previous models in an ‘if it isn’t broke, why fix it’ fashion. Everything is extremely responsive and fast. You can jump between apps easily and quickly and every major streaming or catch-up service is also available right out of the box.

Our full review is in the video -

Once again, Samsung has managed to make one of the best LCD TVs available to buy on the market. It has added meaningful features like the Quantum Processor for 4K upscaling, and the wide-viewing-angle technology with the black screen filter is excellent and really expands the usefulness of a VA LCD panel in normal living room conditions.

The local dimming is very clever and another step up on previous models in being able to give a more consistent image, especially with shadow details and mid tones. While the contrast is not as deep as the Q9FN, the Q90R is more subtle and accurate to the standards in its image attributes, especially in SDR modes. We would like Samsung to change the PQ EOTF settings in the movie mode to keep image purists happy and add their slightly brighter curve to the other picture modes that normal users are more likely to pick anyway, as they are a bluer brighter looking image that those types of consumers like to see. That way it would keep all the possible users happy.

The Q90R is bright, colourful and an excellent HDR performer, which makes the lack of Dolby Vision all the more apparent here. Plenty of other TV makers are including both HDR10+ and Dolby Vision to their TVs in 2019 and giving consumers the choice. Samsung should really follow suit here or risk losing some custom from those consumers who box tick when they buy a new TV. And when it comes to value for money the Q90R, when compared to the competition, does still feel a little expensive.

The Q90R provides extremely accurate images with SDR and HDR content with excellent peak brightness for those specular highlights and decent black levels and shadow details. Motion is also strong and while colours are not as intense as the Q9FN in comparison, they are also not washed out in any way that should put off any genuinely interested videophiles.

If you want strong blacks at the sacrifice of some shadow details through black crush, as well as very strong colours, the Q9FN is the choice to make, however, if you want a smidge more accuracy, very good blacks with excellent shadow details and mid tones, and with less intense neon colours, the Q90R is the more rounded set between the two.

Thankfully, the introduction of the wide viewing angle filter has not impacted on the black levels or contrast performance available on the Q90R like it did with the Sony ZF9. It is slightly down in measurement terms against the Q9FN, but both sets use different local dimming algorithms and as such produce slightly different image results. But this is never at the expense of deep blacks and excellent shadow detailing on the Q90R, the Q9FN is just a little deeper in the blacks, and more aggressive with its dimming, but also slightly lacking in the overall mid tones compared to the Q90R. When they are side by side in the same room with the same content, there are no major issues that jump out at you when it comes to intra-scene contrast performance. Neither is there the impression that blacks are lacking on the Q90R, they are just achieving results through slightly different means.

We didn’t notice the local dimming doing anything odd in the three weeks of intense testing we put it through. Screen uniformity is also good, with just a slight colour shift and darkening seen with bright images at the very edge of the panel. If you are also someone who watches a lot of subtitled content you may want to demo the Q90R before purchasing as this is one area where the local dimming still struggles with blooming and haloing issues in darker scenes. Otherwise, halo and blooming suppression work very well with just a few instances of some bright objects looking a tad darker than they should.

But, in TV terms, the Samsung Q90R is the best all-round LCD TV Samsung have yet produced, with an excellent user interface, superb Smart TV system with every major app and catch-up service available. The ultra wide-viewing angle technology works incredibly well, as does the moth-eye filter, meaning reflections are well controlled and the off-axis viewing is excellent. Adding the wide angle filter has had a slight effect on image contrast and colour coverage when compared to the Q9FN, but this is not bad news. The black levels are still excellent with well-controlled local dimming and image contrast is still strong, competing with many of the best TVs out there. Plus, we get the better above black performance and shadow detail retrieval which adds a more consistent image to the Q90R. Rounding everything off is excellent HDR with all available content in HDR10, HLG and HDR10+ showing strong dynamic range, and excellent shadows and mid-tones, along with strong yet natural colours. For an LCD TV, the Q90R produces one of the best all-round performances seen for this technology and this all creates a compelling TV for 2019 and one that we think is best in its class.