Are Samsung's new headphones over the top? 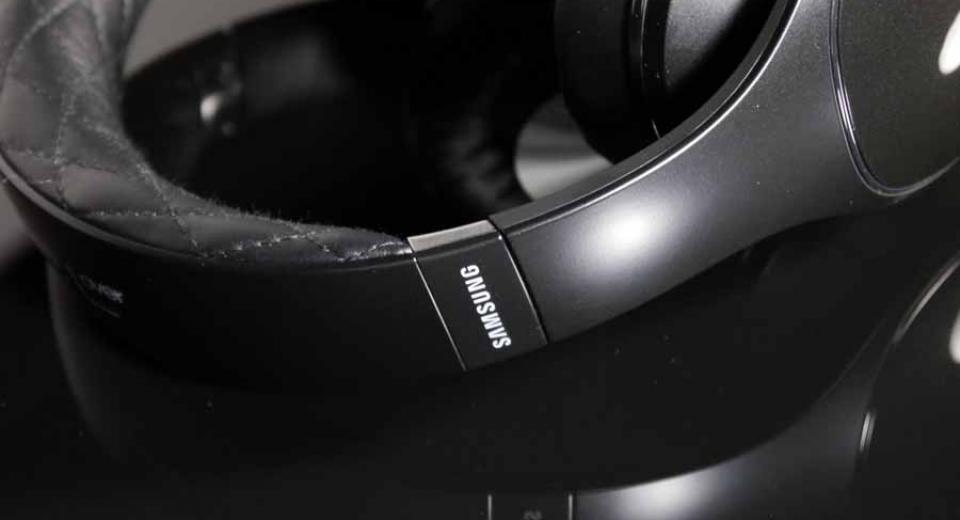 Samsung have been targeting the audio side of AV heavily in the last two years, so it was only a matter of time before they entered the lucrative headphone market.

Their new line of Level headphones are designed to complement Samsung's existing line of audio products and accessories. The Level series includes three types of headphones, designed to cater for all types of mobile users. There's the Level On, a compact over-ear headphone for those on-the-go and the Level In which, as the name might suggest, are in-ear headphones. There's also the flagship model the Level Over which, following Samsung's rather literal naming convention, is obviously an over-ear headphone.
The Level Over retails for £299 and is designed to be used at home or on the move, so they're quite big but they also include a noise cancelling feature. They have an attractive and ergonomic design, a choice of black or white and include touch controls and support for aptX Bluetooth. The headphones use a dynamic driver, a free edge structure to prevent resonance and polyurethane cushioning for comfort. It all sounds very interesting but given their price, they will face some stiff competition. So let's give them the once over...
The black version is classy and understated, with an excellent level of build quality.

When you consider some of the more avant garde designs to have issued forth from Samsung's development labs, the Level Over appears almost understated. This is especially true of the black version, with its classic and rather attractive finish and excellent build quality. The Level Over might not be cheap but at least you feel you are buying a premium product. The combination of the smooth faux leather adjustable headband and high elasticity sponge on the ear pad make them very comfortable to wear, even for prolonged periods. The headphones measure 175x190x78mm and weigh 350g.

The closed back design uses a 50mm bio-cellulose diaphragm with a neodymium magnet, that is designed to deliver a deeper bass and a more natural sound. There's also a free edge structure within the enclosure made from bio cellulose that is meant to prevent resonance between the vibration plate and the frame, thus avoiding unnecessary booming. Along the bottom of the left hand ear pad there is a USB port for recharging the built-in battery, which can last over 10 hours with the noise cancelling on and over 20 hours when it's off. The side of the left ear pad also includes a Near Field Communication (NFC) tag. Along the bottom of the right hand ear pad is the 3.5mm jack for a wired connection, along with the power switch, a notification light and the button for activating the noise cancelling feature or Bluetooth pairing. There are tiny microphones peppered around both ear pads for use with the noise cancelling feature and for taking calls. On the side of the right hand ear pad there are touch sensitive controls, although these only work when you're connected to your source wirelessly. To start or pause playback tap the centre, to play the previous file or restart the current one drag your finger rearwards and to play the next file drag your finger forwards.

The headphones come in a smart carry case, with an airplane plug adapter, a micro USB cable and a non-tangle cable with in-line controls and microphone. So you can also control the headphones and take calls when using a wired connection. Of course the main selling point is the ability to connect wirelessly with your source device using Bluetooth (3.0/apt-X, SBC) and thus enjoy lossless audio without the need for a wired connection. Pairing is straight forward, either via NFC or using the pairing button on the right hand ear pad; once connected you can control your source device, take calls and use S Voice (if you have a suitable Galaxy device).

The Samsung’s were put through their paces using a number of different sources including an iMac, a MacBook Air, an iPad, an iPhone and an iPod (we do have quite a lot of Apple products) and in both wired and wireless configurations. We primarily tested the headphones at home, feeling that they were a little large for wearing on a shopping trip. Whilst the Level Overs are technically portable that applies more to using them on long-haul flights, which they would be ideal for, rather than on the bus. However we did use them in noisy environments in order to test the noise cancelling feature. Material used included ALAC, AAC, MP3 and FLAC, along with Spotify and internet radio and the odd phone call. Since we didn't have an Android or Galaxy device available, we weren't able to test the dedicated app and SoundAlive feature, nor could we test S Voice for similar reasons. First off, whether we connected using a cable or via Bluetooth the results were the same, there was no appreciable difference between the two methods. In addition the Bluetooth connection was robust and we never had any problems within dropouts, nor did we have any issues pairing with our various source devices. By using the wireless connection, you also avoid being physically connected to your source device and you can control playback or take calls by using the touch pad on the right hand ear pad. Overall we found that all of these features worked well and we had no issues controlling playback or taking calls, whether connected wirelessly or via the provided cable.

The use of a closed back means that the headphones don't leak sound, so can't annoy other people if you are using them in public but the ear cups also cut out a lot of noise for the wearer. In fact it's debatable just how much you actually need the noise cancelling feature unless you're wearing them somewhere very noisy. We weren't in the position to actually try the Samsung's on a plane but we can imagine this is the kind of situation where the noise cancelling would be really useful. Since Samsung include a airplane plug adapter, we can assume they agree with us. When we did find a noisy environment to test the noise cancelling feature in, we found that it was very effective, cutting out unwanted sound. When it came to critical listening we found that the Level Over headphones certainly carried their weight and went a long way towards justifying their price. Their sound had a well defined quality, with very good detail retrieval and a nicely integrated bass. Listening to a big performance like The Waterboys You In The Sky, the headphones remained spacious in a way that allows the music to flow around you. As the tempo picks up, the Samsung's never sound slow or lacking in drive, retaining a sense of urgency and keeping pace with tracks like Be My Enemy. The bass response is also very good, thanks to the closed back design, and as a result the low end effectively compliments the other frequencies, so the deep growl of Nick Cave's O, Children was well served here. Our only negate comment would be that they could have sounded more open at times, thus feeling slightly constrained.

The Samsung's proved comfortable to wear over long periods, which is always good news but especially important if you end up wearing them on a ten hour long haul flight. They remained both lively and enjoyable, throughout our testing and we were especially impressed by the level of clarity that they retained on lossless files. Samsung have certainly done a great job of creating a pair of headphones that can hold their own in a very competitive market place. They may not sound quite as good as similarly priced headphones from Grado or Focal but they do offer other features, so it depends on what you're looking for. If it's just critical listening then there are better options but if you want to take advantage of the wireless and noise cancelling features they could be ideal.

The sound had a well defined quality but retained plenty of detail and a nice sense of bass.

The new flagship Samsung Level Over headphones, quite literally, do what they say on the tin. They are an over-ear closed back design that includes Bluetooth and noise cancelling features. They come in a choice of black or white and the design is understated and classy, whilst the build quality is excellent. There is a sturdy carry-case, a non-tangle cable with in-line controls and microphone, an airplane plug adapter and a miro USB cable for recharging the built-in battery. They are easy to setup and use and you can take calls and control your source device using touch sensitive controls on the headphones themselves. The wireless functionality worked well and was robust, whilst the noise cancelling feature was also effective, even if the over ear design cut out a lot of noise anyway.

Samsung also include a Level app, SoundAlive feature and S Voice but to take full advantage of these you'll need an Android or Galaxy device. The sound quality was impressive with a well defined quality, very good detail retrieval and a nicely integrated bass. The headphones had an energetic and enjoyable quality, although they could have sounded more open at times. Still they deliver everything they were designed to do and thus can justify their price tag. There are better sounding headphones available at this price from Grado and Focal, for example, but they don't have Bluetooth or noise cancelling. So if these features are important to you, then the Samsung Level Over headphones should definitely be on your short list.