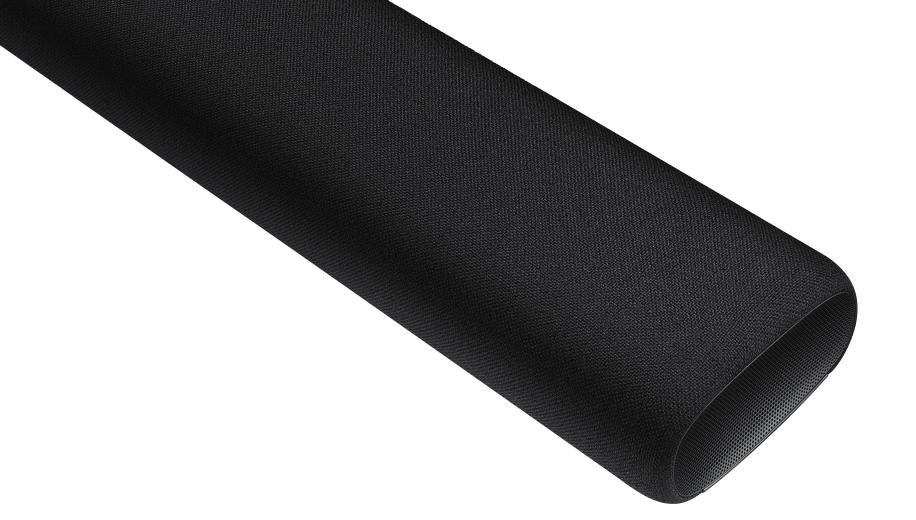 What is the Samsung HW-S60T?

The Samsung HW-S60T represents something of a new direction for the Korean giant. This compact 4.0-channel all-in-one soundbar still benefits from the company's acoustical know-how, but also sports a more elegant and 'lifestyle-friendly' design.

Samsung has tried to mitigate the smaller cabinet by including the side-firing horns, wide range tweeters and Acoustic Beam technology found on its more immersive soundbars. The result is a bigger soundstage from a more compact package.

The S60T is a fully-functioning smart speaker thanks to built-in Amazon Alexa, which means hands-free voice control and music streaming. There's also support for the SmartThings app, and the ability to add a wireless sub and rear speakers if you want more surround envelopment.

The HW-S60T currently retails for £399 as the time of writing (August 2020), but there's also the grey HW-S61T if you fancy a change from black. While that's not cheap, if they sound as good as they look, these new models could be just the ticket for those with discerning eyes and ears.

The Samsung HW-S60T sports an understated and elegant cabinet that's designed to fit seamlessly into any modern living space. It has curved edges and a wrap-around fabric by Kvadrat that covers the six built-in speakers. Kvadrat appears to be all the rage with interior designers at the moment, but this is certainly an attractive soundbar with an eye-catching look and a pleasing sense of minimalism.

In fact, aside from the side-firing drivers, some basic touch sensitive controls and an indicator LED, there's nothing to spoil this soundbar's clean lines. You'll never remember all the different LED colour combinations, but thankfully the lack of a display isn't really an issue because the Samsung talks to you, telling you which input or mode you have selected. The S60T measures 764 x 68 x 125mm (WxHxD), and weighs in at 2.9kg. The HW-S61T is identical, but uses a light grey finish instead.

The Samsung HW-S60T houses its connections in a recessed area at the rear, and it's a fairly simple selection. There an HDMI connection with ARC and CEC support, and an optical digital input. That's your lot, although the soundbar also has built-in Wi-Fi and Bluetooth (SBC).

There are some basic touch sensitive controls on the top of the soundbar, although in the case of the black version these are quite hard to see, because they're basically black on black. The controls are made up of a multi-function button (on/off and source select), volume up/down, and on/off for the far-field microphone.

The S60T comes with Samsung's standard-issue remote, and it remains one of the better soundbar zappers. There are central navigation and play/pause buttons, along with a sound control button for setting treble, bass, audio sync and side level. There's also a source select button, a Bluetooth pairing button, the sound mode (Standard, Music and Adaptive Sound), volume up and down, mute and a control for setting the subwoofer level.

It's worth noting that some of the buttons have multiple functions, so holding the Woofer button up for five seconds changes the ability to control the soundbar using your TV remote from the default Samsung setting to a third-party model. In addition, the right and left buttons skip music files forwards or backwards.

The Samsung HW-S60T uses a 4.0-channel speaker layout that's composed of a total of six drivers and 180W of amplification. There is no dedicated centre speaker, but there are two forward-firing speakers, each composed of a woofer and mid-range tweeter, plus mid-range tweeters on each side that drive a side-firing horn and upward-firing Acoustic Beam technology. There are also passive radiators for deeper bass, and the result is a soundstage with greater width, height and depth that's designed to fill the average living room.

The combination of six drivers, 180W of amplification, and Acoustic Beam technology make for a big soundstage

The S60T decodes Dolby Digital Plus, along with regular 5.1 Dolby Digital and DTS. There are also a number of sound modes: Standard, Music and Adaptive Sound. The first two are fairly self-explanatory, with Standard reproducing audio with no processing, and Music optimising the speakers for two-channel content. The Adaptive Sound mode analyses the audio signal and automatically optimises the sound depending on whether its the news, sports, a movie and so on.

The HW-S60T supports various file formats, including AAC, MP3, WAV, OGG, FLAC, ALAC and AIFF. There's also support for Spotify Connect, along with Samsung's SmartThings app (iOS and Android), which provides a degree of control and makes setup easier. Samsung has added the Tap Sound feature this year, which allows owners of certain Samsung smart phones to simply tap the soundbar with their phone to make a Bluetooth connection.

The inclusion of built-in Amazon Alexa also turns this soundbar into a fully-functioning smart speaker. This allows easy operation of the S60T using integrated Amazon Alexa voice control. You can play music, check weather, get questions answered – all completely hands free. As a result, you can sit back on the sofa, and just use your voice to get Alexa to skip a track or crank up the volume.

The features include built-in Alexa, the SmartThings app and Samsung's Tap Sound for a quicker Bluetooth connection

While the HW-S60T is designed as an all-in-one soundbar, you can expand the system by adding Samsung's SWA-W500 wireless subwoofer (£279) and SWA-8500S wireless rear speakers (£112). This does rather go against the entire 'lifestyle' ethos, but it's nice to know you have the option.

The Samsung HW-S60T is simple to install: just make sure the soundbar is level, it's not blocking your screen and that the drivers (front and sides) are clear of any obstructions. There are brackets included in the box for those who want to wall mount.

The SmartThings app makes connecting to your wireless network easy: just download and install the app, launch it, and follow the instructions. You'll be connected within a matter of minutes. You can also pair the soundbar to another Bluetooth device in seconds by simply pressing the Bluetooth pairing button on the remote and then selecting 'Samsung Soundbar S60T' on the source device. If you have a Samsung TV, that should configure automatically for the soundbar, but if you have a TV from another manufacturer you'll need to make sure that ARC is setup correctly.

Operating the HW-S60T is a cinch, you can either use the provided controller, your TV remote, or the SmartThings app. There's also the option of voice control thanks to Amazon Alexa, which you setup by simply selecting the Alexa account on the SmartThings app and following the instructions.

Alexa can be activated by calling out Alexa, or pressing the multi-function button the soundbar for three seconds. While the latter provides access to a number of music streaming services, SmartThings also allows you to play audio through another Samsung device using Group Play, and not only gives you control over the soundbar, but also a range of other smart home appliances.

The S60T is easy to install, simple to setup and the SmartThings app allows you to optimise the performance

For testing, I connected the S60T to my LG 77C9 4K OLED TV using HDMI-ARC, although if your TV doesn't support ARC you can use the optical digital connection. To create a Bluetooth connection, I simply selected the BT function and then paired the soundbar to my Apple iPhone X. This allowed me to test the soundbar's capabilities with streamed music over Bluetooth, and I also streamed content using the SmartThings app and Amazon Alexa.

The Samsung HW-S60T is designed to deliver a big soundstage from a relatively small footprint, and in that sense this soundbar is a resounding success. It has a presence that retains width, depth and height, as a result the S60T sounds considerably bigger than it looks, while ensuring the delivery remains composed and focused.

The S60T also has enough power to fill an average-sized living room with sound, making it a great choice for anyone looking to beef up the audio on their TV. Crucially, it manages the all-important task of sounding good with mixed content including TV shows, movies and music, which is often difficult for a soundbar to achieve.

Kicking off with some regular TV programming like the news, cooking shows and documentaries, the Samsung immediately impresses. The audio is spread across the front of the room but despite the width, it retains great stereo imaging and separation. Music and sound effects are also well-rendered, retaining clarity and good localisation.

While the S60T doesn’t have a centre speaker, dialogue remains clear and focused on the screen. There’s also a reasonable amount of bass under-pinning the audio thanks to the passive radiators. The musical delivery is also accomplished, making this soundbar a great all-rounder regardless of your viewing habits.

The soundstage has width, height and depth that makes the S60T seem much bigger than its compact footprint

A more complex 5.1 soundtrack like The Boys on Amazon Prime is handled well, although the limited bass is more apparent. However, effects are placed either side and above the TV screen with pleasing precision, and the soundbar did a great job of giving some weight to the punches, gunshots and explosions in the numerous action scenes.

A sense of immersion is limited given the lack of rear speakers, and obviously there’s no support for Dolby Atmos and DTS:X, but the bigger soundstage certainly helps sell the visuals on larger screen sizes. However, the lack of bass with a movie like Godzilla: King of the Monsters is more obvious, but if you feel you need more low-end grunt you have the option to add a subwoofer.

The musical performance is surprisingly accomplished, with a clean midrange, refined high-end and a detailed delivery that works with various types of music. The gravelly vocals on Nick Cave's O Children retains its depth, the drums and guitars of Guns 'n' Roses' Welcome to the Jungle have a driving intensity, and Kate Bush's vocals and piano remain clear and free of sibilance or sharpness.

The Samsung HW-S60T is an impressive lifestyle soundbar from a company that has only recently started to make in-roads into this particular market. The cabinet is well-made, with an eye-catching design that will grace any modern living space. The setup is simple thanks to Samsung's SmartThings app, and there's a choice of control options that includes built-in Amazon Alexa.

More importantly the S60T also sounds great, with an expansive and room-filling presence. The delivery is clean and detailed, and the side-firing speakers combined with Samsung's Acoustic Beam technology help make it sound bigger than it actually is. The bass response is reasonable, but as with most all-in-one systems it struggles to go deep (although you can add a wireless subwoofer).

There are limited connections, and obviously no support for immersive audio, but that's not who this soundbar is aimed at. Ultimately, the S60T makes an excellent choice for anyone seeking a discrete soundbar to boost the sound quality of their TV, while simultaneously complementing their living room's carefully chosen decor.

The obvious alternative to the HW-S60T is the Sonos Beam, and it seems Samsung has ambitions on the same lifestyle market as Sonos. The S60T has the edge in terms of looks but otherwise the two offer similar features, including HDMI-ARC, built-in Alexa, and expansion options. The Beam lacks Bluetooth, nor does it have a dedicated remote, but on the plus side there's a room calibration feature and it sounds great. Ultimately the Beam's main appeal is that it's part of the Sonos eco-system, but as a lifestyle soundbar it's definitely worth considering.