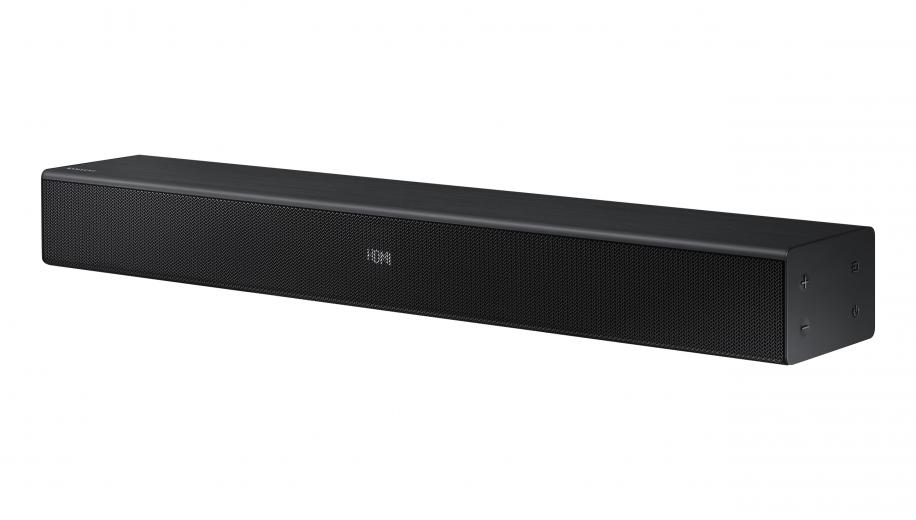 The Samsung HW-N400 is the latest entry-level 'all-in-one' soundbar from the company. As the product range might suggest, this is a single unit solution with no separate subwoofer. The N400 is designed for smaller screen sizes, so it uses a narrower cabinet than the Samsung HW-N650 that I reviewed recently.

To hit a lower price point, the Samsung has a stripped-down set of features: so no multiroom support, but there is an HDMI input and an output. You can pick up the N400 for £299 as at the time of writing (June 2018) but does it offer enough to stand out in a highly competitive market place. Let's find out. The Samsung HW-N400 uses a design that is essentially the same as the company's other soundbars, with a simple rectangular block and a black finish. As I'd expect from Samsung, the build quality is very good and certainly goes some way towards justifying the price tag.

The front of the soundbar is composed of a metal grille, along the top there’s a nice brushed metal finish, and the sides are made of plastic. On the right hand end panel there's a set of very basic controls, and these allow you to change the input, adjust the volume and turn on the soundbar. The N400 uses a very minimalist design but there is an LED display behind the front grille, between the two speakers. This display provides basic feedback to the user, so when the soundbar receives a command it lights up and shows which input has been selected, which of the various settings and modes has been chosen, and the current volume.

The N400 is designed for smaller-sized TVs, so it measures 640 x 71 x 100mm (WxHxD) and weighs in at 3kg. At 71mm high it's actually taller than the HW-N650 but it shouldn't block the screen, even when placed in front of the TV. The N400 is small enough to fit on a shelf under the TV, although if you would rather wall mount it Samsung conveniently includes dedicated brackets for just such a purpose. All the connections are in a recessed area at the bottom of the soundbar, and here you’ll find an HDMI input and an HDMI output with support for ARC (Audio Return Channel). You'll also find a USB port, an optical digital audio input, a 3.5mm auxiliary audio jack, and a connector for the separate power supply. The included remote is very similar to the one used with the N650, and the only real difference is that the control for changing the level on the N650's separate subwoofer has been replaced by a bass control on the N400. It's a reasonably large controller, which is ergonomically designed, and fits comfortably in your hand.

It includes all the buttons you’ll need to setup and operate the N400, with navigation and play/pause controls, along with a button for setting treble and audio sync. There's also a source select button, a Bluetooth pairing button, the sound mode (Standard and Surround), volume up and down, mute and the aforementioned bass control. The Samsung HW-N400 is an entry-level soundbar, so it's not exactly feature-packed. It's based around a two-channel layout, with a pair of forward-firing speakers that each use a mid-range driver and wide-dispersion tweeter. Samsung claim a frequency response of 60Hz-20kHz, but interestingly there are no numbers for the amplification power.

The stereo layout means there’s obviously no dedicated centre channel for dialogue on the N400. However, since the Samsung only supports two-channel Dolby Digital and DTS, the lack of a centre channel shouldn't really affect the performance, but I'll find out in testing. Although the N400 doesn't come with its own subwoofer, it is compatible with Samsung's optional SWA-8500S wireless subwoofer.

There are two sound modes included on the N400: Standard and Surround. Standard bypasses any processing and is effectively a stereo mode, making it ideal for music and some TV programmes. In comparison, Surround is intended to create a more enveloping experience when it comes to movies, TV dramas and games. The N400 is missing a number of features that are found on other Samsung soundbars, so there's no support for multiroom functionality. This feature wasn't supported on the N650 either, which is surprising because multiroom is growing in popularity. Presumably Samsung took the decision to drop this feature so that it didn't have to include Wi-Fi capability, and can thus keep the cost down.

The N400 does at least include Bluetooth, although it's the older version 2.1, but that does mean you can stream music from your smartphone or tablet directly to the soundbar. There's also a handy feature for owners of compatible Samsung TVs, that allows you to send sound wirelessly from your TV to the soundbar, thus eliminating unnecessary cabling.

The connectivity of the N400 might seem reasonable for a soundbar at this price point, after all many don’t even include HDMI support. However the included HDMI input and output are both version 1.4, which means the Samsung can’t pass 4K and HDR. Whilst we appreciate this is a cost-cutting decision, the N400 isn't exactly cheap at £299 and the lack of 4K/HDR support is a shame.

Although it isn't quite as bizarre as the N650, which actually uses HDMI 2.0 connections but still doesn't pass HDR. How big a deal the HDMI limitation is will largely depend on your display and sources, but the easiest workaround is to connect all your sources to the TV, and then send all the audio to the soundbar via ARC. This approach won't make any difference to the sound quality.

The HDMI input and output are version 1.4, which means they can't pass 4K/HDR

Samsung's recent soundbars have genuinely sounded really good, so I found myself slightly disappointed by the HW-N400. It just seemed under-powered in comparison, and that might well explain why Samsung make no mention of the amplification in their marketing. I could turn the N400 up to full volume and it simply wasn't that loud, so this soundbar is definitely better suited to smaller rooms. Since it is aimed at smaller TVs that does make sense, and at least the Samsung didn't distort when it was at maximum volume.

The N400 certainly doesn't sound bad, and with two-channel content it performed reasonably well. When watching TV programmes such as Britain's Best Home Cook or the new documentary series Africa, the N400 delivered the stereo music extremely well. It also managed to deliver dialogue that was clear and focused, despite the lack of a dedicated centre speaker. However perhaps due to the width of the cabinet, and despite the use of wide-dispersion tweeters, the front soundstage was narrower than I would have liked.

When it came to listening to music the N400 performed in a similar manner, delivering a decent two-channel experience with some nice stereo separation. There was was also a pleasing amount of detail to the reproduction, with a good mid-range and some well rendered higher frequencies. Where the Samsung struggled was at the lower end, because it doesn’t have any built-in woofers, just a vent at the rear of the cabinet. I tried increasing the bass control, but that had little real impact in terms of performance.

As a result there was very little in the way of bass presence, even when it came to music. The beginning of Gradually by Ben Watt is supposed to have a nice low frequency kick to it, but that was missing on the N400. This absence of bass was more apparent when it came to TV dramas, movies and games, where there is a greater reliance on bass energy to give the sound impact. Unfortunately that deep bass just wasn’t there on the N400, and as a result a movie like Pacific Rim lost much of its scale and presence.

The narrow soundstage and limited bass meant that the N400 offered very little in the way of genuine immersion when listening to soundtracks. Sounds emanated from just in front of the TV, with nothing at the sides, above or at the rear, although dialogue at least remained clear. The Surround mode did nothing to really improve this sense of immersion, frequently just adding echo to the audio. As a result I tended to prefer using with Standard mode, which bypasses any processing to concentrate on the stereo performance.

The Samsung HW-N400 delivers decent audio for a two-channel soundbar but does feels rather basic, even for an entry-level model. The feature set is fairly limited and there's no separate subwoofer, although you do have the option to add one. Unfortunately I found the N400 rather underwhelming in terms of its performance, which really surprised me because Samsung has delivered some impressive sounding 'bars over the last few years.

In the case of the N400, it has a limited soundstage that lacks any real width or presence. The amplification is under-powered, so it will struggle in larger rooms, and the lack of a separate subwoofer means there's little in the way of bass. The Samsung is perfectly competent with music and TV shows, but really can't deliver the kind of immersive experience one expects with movies and games. Ultimately the Samsung HW-N400 can improve the sonic performance of your TV but there are better and cheaper alternatives.

In terms of all-in-one soundbars, the Q Acoustics M3 is a great choice and only costs £219. Just like the N400 it doesn’t have a separate subwoofer, but unlike the Samsung it is capable of a wider soundstage, more power and deeper bass. The M3 only has an HDMI output, but that's largely moot given the limitations of the N400 in this area.

The Acoustic Energy AEGO Sound3ar is definitely worth considering and it also only costs £219. The cabinet is small but well made, and as a result it sounds bigger than it actually is. There's also a separate wired subwoofer that delivers plenty of bass. The remote leaves a lot to be desired and there’s no HDMI support, but the AEGO Sound3ar delivers both performance and value.

Finally, the Polk Magnifi Mini is another great soundbar and will only set you back £281. The Mini obviously uses a smaller cabinet, but is still able to produce a surprisingly big soundstage. It comes with a separate wireless subwoofer, so it's also capable of deeper bass, while the inclusion of an HDMI output and a well designed remote make for an attractive overall package.