A definite step-up on its predecessors 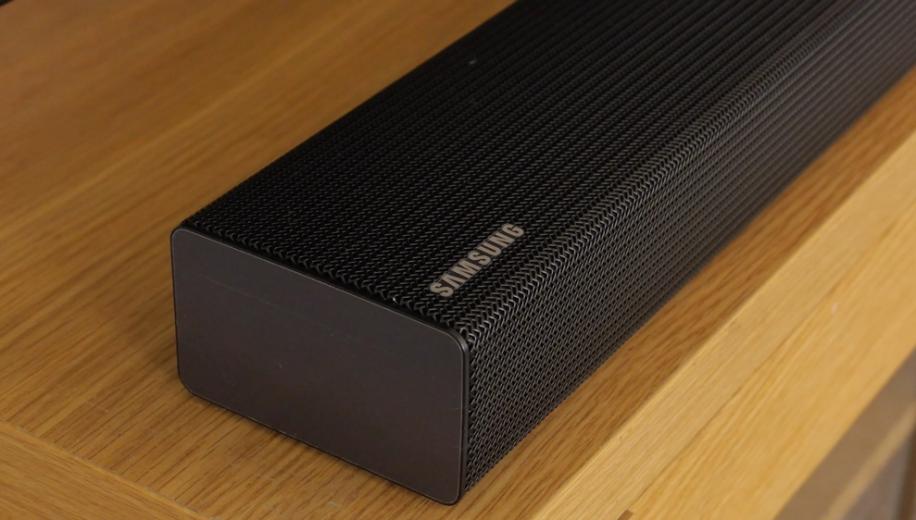 The Samsung HW-K550 is a mid-range soundbar that is priced at £349 (May 2016) and comes with a wireless subwoofer in the box. It is identical in specification to the HW-K551 only its finish is black, rather than silver, and is one of Samsung’s straight – i.e. non-curved – soundbars for 2016. If you wanted a curved model to match your similarly shaped TV, you’d need to be looking up the range to something like the HW-K6001 or HW-K6500/K6501 which would add around another £100 to the buy-in costs. The HW-K550 is also compatible with Samsung’s multi-room audio system and features Bluetooth connectivity. Samsung has been producing soundbars since they first caught the imagination so let’s see how they’re progressing in this product sector…

The HW-K550 takes up pretty much the minimum room possible with a span of 101.5cm across, 8.75cm depth and a height of just 5.4cm which means it’s very unlikely to get in the way of your TVs screen and/or its infra-red receiver; this is a good thing as we have reviewed soundbars where both undesirable scenarios have occurred. As alluded to above, the colour scheme is all-black and the HW-K550 presents an attractive mesh metal finish with a handy Vacuum Fluorescent display, just right of centre, providing information on sound modes, volume and input selection.

The subwoofer is a reasonably large box – measuring 335x452x152mm (HxWxD) – and it has a shiny black plastic finish on everything but the side panels which are cloth on one side and matte on the other.

The supplied remote control is charcoal grey in colour and also features a mesh effect. The volume, source and transport control buttons are of a light grey colour and dominate the top portion while the Sound Effect, Sound Control and Bluetooth buttons are much smaller and more conventional. All the connections are recessed on the bottom of the HW-K550 and include a 3.5mm stereo jack, a Toslink digital audio input and both an HDMI input and output, with the latter including Audio Return Channel (ARC) functionality, meaning you can just use one cable to connect TV and soundbar together and use the TVs remote to control the volume. The HW-K550 does feature multi-channel (Dolby Digital 5.1) audio decoding, though, so choose your most used source with that output, e.g. Blu-ray player/games console/set-top-box, for the HDMI input. Additionally, the Samsung HW-K550 has built-in Bluetooth and compatibility with Samsung’s TV SoundConnect technology which means, with a compatible Samsung TV - 6 Series and up - you don’t actually have to make any physical connection between soundbar and TV if you would prefer to cut down on the cables in your setup. The HW-K550 features six speaker drivers in the main bar - 3 mid-range and 3 tweeters - with active rather than passive crossovers. The wireless active subwoofer is a bass reflex design with a 7-inch driver and there's a total of 340W of digital amplification between the woofer and speaker bar. You can also choose to bolster the 3.1 channel output with a wireless surround speaker kit (product code SWA-8000S) should you wish for around another £100, which adds two rears to the package. The HW-K550 supports Dolby Digital 5.1, two channel DTS, along with AAC, MP3, WMA, OGG, WMA and FLAC files with hi-res audio supported up to 92 kHz/24-bit. The Samsung also features Bluetooth connectivity and via a new app, the K550 can even be powered on and off using Bluetooth. The app - Android only - also features full remote control functionality.

The inclusion of the new centre speaker driver has definitely reaped dividends when it comes to the output of movies and TV through the K550. It’s not that dialogue was ever an issue on previous generations of Samsung soundbars but now it’s has better localisation and is even more distinct, especially with Dolby Digital 5.1 audio, which is no surprise, but also with DTS multi-channel as well. There will be definite benefits for most people in having your movie source, e.g. Blu-ray or DVD Player, connected to the HDMI input of the HW-K550. The majority of TVs, certainly those from the more budget end of the market, won’t pass a 5.1 signal over ARC and so you’re then reliant on its down-mixing capabilities, which may or may not be any good, to provide the soundbar with the needed audio information and - in the case of DD 5.1 at least - you’re also losing four channels of audio before you’ve started.

The HW-K550 provides a crisp and fairly lively tone in its default Standard listening mode but you can increase the warmth factor, should you so wish, by switching in to Music. Further, you can alter the characteristics of both to give you a pseudo-surround sound by playing around with the Surround Sound control but, to us, that just makes the audio sound eerily echoed although it is successful to some extent. It’s not like the K550 lacks for verticality in the first place, which is impressive given the form factor and the soundstage is also a little bit wider than you might expect.

There are four other sound modes aside from the two we’ve already recommended but we never found the need for ‘Clear Voice’, as dialogue was plenty clear enough; ‘Sports’ is interesting in how it emphasises and widens the left and right channels to give added separation but, again, unnecessary and the Movie option is just too bass heavy. The Night Mode is pretty good, however, and an easy enough alternative to using the volume controls and adjusting the subwoofer output. Speaking of the sub, the 7-inch driver is reasonably agile and fast with enough power to send ripples through the carpet but the default setting of +3 might be a bit too much for some rooms and it could overpower the mid-range drivers so it’s worth experimenting with the settings to find the best balance for your environment. The HW-K550 has a nice, wide soundstage and enough low-end presence to keep most happy
We’ve been slightly critical of Samsung’s soundbars in the past when it comes to their capabilities with music but the HW-K550 is definitely an improvement over the equivalent products from the 2015 range. There’s more of a rounded, full sound to tunes whether played via USB, connected players or over Bluetooth. We hooked up a media player capable of Hi-res audio and it sounded very good indeed but anyone serious enough about music to go to the lengths of buying, collecting or streaming hi-res files isn’t going to settle for a soundbar as a playback solution in all honesty. It’s far more likely the K550 will appeal to the Bluetooth streaming crowd and the Samsung is a perfectly capable outlet for this although perhaps one of the family of Sony soundbars might be a better bet given their abilities to pull out the best from compressed audio.

The Samsung HW-K550 is a sleek soundbar coupled with a wireless subwoofer that is priced around the £350 mark. The all-black metal – silver also available - mesh design is understated and non-flashy, which is how we like our soundbars, and the low-slung design should sit below most TVs without causing viewing issues or interfering with remote control commands. The set of conections should be ample, for most, with Toslink digital, stereo and USB inputs joined by a brace of HDMI connections. One of the HDMI ports is enabled for Audio Return Channel (ARC) functionality meaning you could just use the one cable to playback all sources connected to the TV. The supplied remote is also quite stylish, sporting a complementary design to match the speaker bar but pressing the buttons isn’t that satisfying as they feel a touch soft.

While the K550 is ARC capable, you’ll likely get better playback of multichannel audio sources via the HDMI input, both with Dolby Digital and DTS, despite the latter only being licensed for stereo. The HW-K550 boasts three sets of mid-range and tweeter drivers with a new centre channel providing very clear dialogue while the right and left channels provide very good separation and an impressively wide soundstage; the Samsung also provides a good sense of 'verticality' and convincing bass courtesy of a fairly nimble 7-inch driver. There’s no doubt this package is primarily designed for movie and TV playback but it’s quite a musical performer, too, whether via direct playback or via Bluetooth streaming – it even supports hi-res audio, although it could never lay claim to being a proper audiophile solution. Still, for its all-round abilities, attractive design and reasonable price-tag, the Samsung HW-K550 is a worthy recipient of an AVForums Recommended Award.


What else is there?

The recently reviewed Cambridge Audio TVB2 is priced a little lower than the Samsung and provides a very similar sound and has four HDMI ports but, arguably, a less impressive sub. The Q Acoustics M4 currently costs £329 but lacks a sub altogether; however it has more finesse than either, especially with music. Another good alternative is the Yamaha YSP-1400 although that lacks HDMI but does come with a subwoofer. For a more general idea, take a look at all of our soundbar reviews.