Just the ticket for those TV sound blues 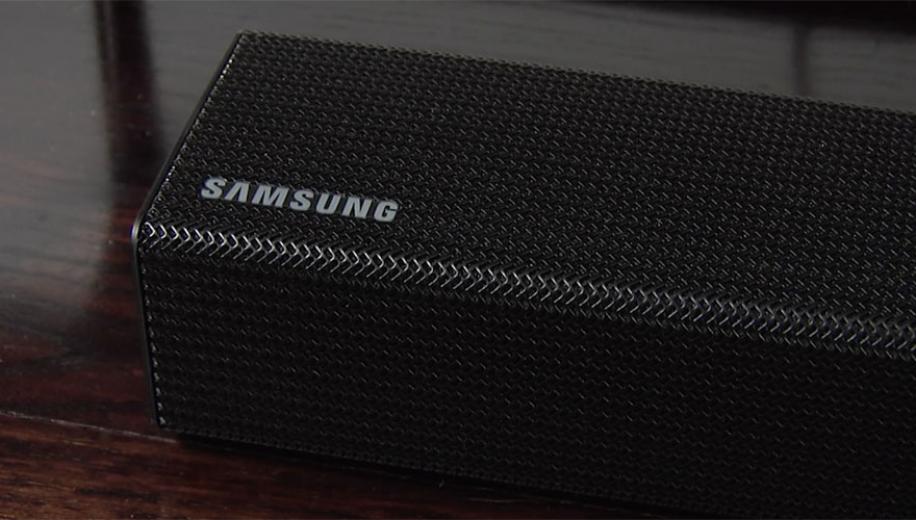 The Samsung HW-K450 is the latest soundbar from the Korean manufacturer and sits below the HW-K550 in their new line-up for 2016. These soundbars drop the curved design and hefty price tag found on many of Samsung's models last year, going for a more traditional shape and a budget price point. The K450 can be picked up for just £249 as at the time of writing (May 2016) and for that you get a soundbar and a matching wireless subwoofer, along with HDMI and Bluetooth support. There's a big summer of sport fast approaching with both Euro 2016 and the Rio Olympics on the horizon but many modern TVs fail to deliver a decent audio performance. Is the Samsung HW-K450 the answer to your problems, allowing you to fully enjoy these sporting events without breaking the bank? Let's find out...

The HW-K450 uses Samsung's traditional soundbar design, before the company became obsessed by curves and started bending everything. So you get a black rectangular main unit that uses a metal grille and a decent level of build quality. The K450 feels solid and well engineered, giving you the sense that this is more than just a budget product. The main unit measures 909 x 54 x 71mm (WxHxD) and weighs in at 2.0kg. The low form factor of the design means that the soundbar shouldn't block your TV screen or the IR receiver but it should be large enough for screen sizes up to 55 inches.

The HW-K450 uses a traditional soundbar design, with a wireless sub and a decent feature set There are panels at either end, with a black metallic finish and on the far right end panel there are some basic controls for on/off, source select and volume. In the middle there is a simple display that shows the selected input, the volume, the sound effect and any other settings chosen. The HW-K450 comes with a matching wireless active subwoofer, a remote control, a power cord, an AC adapter and an optical digital cable. There's also a pair of brackets, screws and a template for wall mounting if your prefer. The included wireless active subwoofer is ported and has a gloss black plastic and black cloth finish. It comes already paired to your soundbar, so they should connect as soon as you turn them on. If for some reason they don't, you also have the option to manually pair the soundbar and subwoofer. There is an ID button on the rear of the subwoofer for this purpose and on the top of the subwoofer there are indicator lights that show it is on and paired to the soundbar. The subwoofer measures 179 x 361 x 300mm (WxHxD) and weighs in at 4.6kg.

The connections for the HW-K450 are all located in two recesses on the underside of the main unit. There are spaces to run the cables through, which makes it easy to place the main unit under the TV or to wall mount it. In the left hand recess there is an optical digital input, a USB port and a 3.5mm analogue input.
The HW-K450 has plenty of connections including HDMI, Bluetooth and TV SoundConnect Whilst in the right hand side recess there is an HDMI input and an HDMI output – both are version 1.4 with the output supporting ARC (Audio Return Channel). There's also a connector for the AC power adapter. The HW-K450 includes support for Bluetooth and Samsung's TV SoundConnect, which allows the soundbar to wirelessly connect with a supporting Samsung TV. The included remote control is small, so depending on the size of your hands you'll either find it comfortable to hold and use or rather fiddly. However all the buttons you need are included such as on/off, source select, volume, sound effect, sound control and surround on/off. Depending on your make of TV, you can also control the HW-K450 using the TV's remote and when sending content to the soundbar via Bluetooth you also have a degree of control with the BT app.

The HW-K450 is a 2.1-channel soundbar with a main unit and a wireless active subwoofer. The entire system uses 300W of amplification and the subwoofer is a bass reflex design that uses a 6.5" driver. The soundbar supports 2-channel Dolby Digital and DTS, whilst the HDMI inputs and outputs can handle 3D. The K450 supports a number of file types, including AAC, WMA, MP3, OGG, WAV and FLAC, with hi-res audio supported up to 92 kHz/24-bit. The HW-K450 includes Samsung's TV SoundConnect feature, which allows the soundbar to connect wirelessly with any supporting Samsung TV; it also supports Anynet+ (HDMI-CEC). In addition there's the Samsung Audio Remote app, which is freely available for your Android device, allowing users to connect via Bluetooth to control the key Soundbar functions, play music and even power on the unit. You can also buy the optional Wireless Surround Kit (SWA-8000S) for an extra £100 and expand the soundbar into a 4.1 channel system for a genuine surround sound experience.

The HW-K450 is easy to setup, as long as you're careful about subwoofer placement, and is a definite return to form, with the kind of refined performance that we often experienced with Samsung's previous soundbars. If you like your audio precise, clear and well defined, then the K450 might be for you, with a broad and open front soundstage and a sense of scale that will easily compliment screen sizes up to 55 inches. The sound has a nice feeling of immersion, even without resorting to the listening modes, but dialogue is always anchored to the centre. The higher frequencies are well served and, despite the slim dimensions, so is the mid-range. The soundbar can go loud without distorting or becoming brittle and should be sufficient for the average-sized living room.

The bass response is also very good thanks to an effective subwoofer which integrates well with the soundbar, delivering a decent low-end foundation to the overall sound. The subwoofer won't necessarily shake your floor but it does the job and given the type of rooms that the K450 will be used in, it's more than adequate. The general feeling is of a competent performer with an enjoyable and lively sound that is unlikely to cause offence and does everything it should at this price point. The K450 handled the low frequency effects in San Andreas very well, whilst retaining a sense of cohesion. It also effectively delivered a soundtrack like The Revenant, retaining the atmospheric effects and keeping all the dialogue (or should that be grunting) clear.

The K450 has six listening modes – Standard (passthrough), Cinema, Sports, Clear Voice, Music and Night Mode, for listening in the evening without disturbing the rest of the family; and there's also a ‘surround’ effect that can be applied to each. This DSP processing can be impressive and the Sports mode can be effective in localising crowd noises but we largely ignored these modes in favour of Standard. The surround mode obviously couldn't actually produce a real surround effect and although it did give the audio a slightly greater sense of immersion, we also found that it tended to create excessive echo and muddy the vocals, so we left it off. We generally found that the combination of the soundbar and the subwoofer was enough to offer an effective audio performance.

Despite the lack of genuine surround sound, the K450 did a great job of localising effects within the front soundstage and dialogue was generally very clear within the mix, even when the sound design was complex. The Samsung was also rather good at handling music, whilst the excellent file support often proved useful. There's no doubt that the refined nature of the Samsung soundbars and the less powerful subwoofer might cause them to struggle with some movie soundtracks, but they're well suited to music. We went through our music collection trying an eclectic mix of musical styles and overall the K450 handled them all extremely well, making this soundbar an ideal budget all-rounder.
The HW-K450 delivered a great performance, with an open detailed sound and clear dialogue


If you have a TV with a screen size of 55 inches or less and you're looking to beef up its sound without breaking the bank, then the Samsung HW-K450 could definitely be the soundbar for you. It's attractively designed, with a lovely finish and great build quality. It comes with a matching wireless active subwoofer, along with a remote control, an optical digital cable and brackets for wall mounting. There's even an optional wireless surround kit if you want to create a 4.1-channel system. The K450 has an HDMI input and an HDMI output that supports ARC; it also has Bluetooth support and Samsung's TV SoundConnect feature. The included remote control might be a little small for some people but we found it quite effective and for Android users there's also a BT app. The HW-K450 is easy to setup and as long as you're careful about subwoofer placement, the performance can be very good.

The Samsung was quite refined for a budget soundbar and it could go loud without distorting or becoming brittle. The subwoofer isn't a monster but it gets the job done and combined with the soundbar the two can deliver an open front soundstage that should be enough for the average living room. The K450 could reproduce effects whilst keeping dialogue clear and despite a number of listening modes, we tended to just use Standard. The surround feature merely added too much echo but we found the soundbar and subwoofer combination could produce a sense of immersion. The K450 also sounded good with music and it has a decent level of file support, making it an ideal budget soundbar with a great all-round performance. So if you're looking to pick up a budget soundbar before the summer of sport kicks off, the Samsung HW-K450 should definitely be at the top of your short list.


If you like the look and performance of Samsung's soundbars, you could certainly consider the more expensive HW-K550, which has an almost identical set of features but offers slightly bigger audio quality. The K550 could be a better choice if you have a larger screen size and will set you back around £349. As an alternative you could go for the Cambridge Audio TVB2 which costs around £299 and has a very similar set of features, plus an extremely familiar design that suggests the designer's at Cambridge Audio have been looking at Samsung's soundbars lately. Finally there is LG's LAS550H, which can be picked up for slightly less than the K450 but once again offers a similar set of features and a familiar design. All these alternatives are excellent choices but in terms of sheer bang for buck, the Samsung HW-K450 offers a winning combination of features, performance and price.