If you're looking to beef up the sound on your curved TV, this might fit the bill 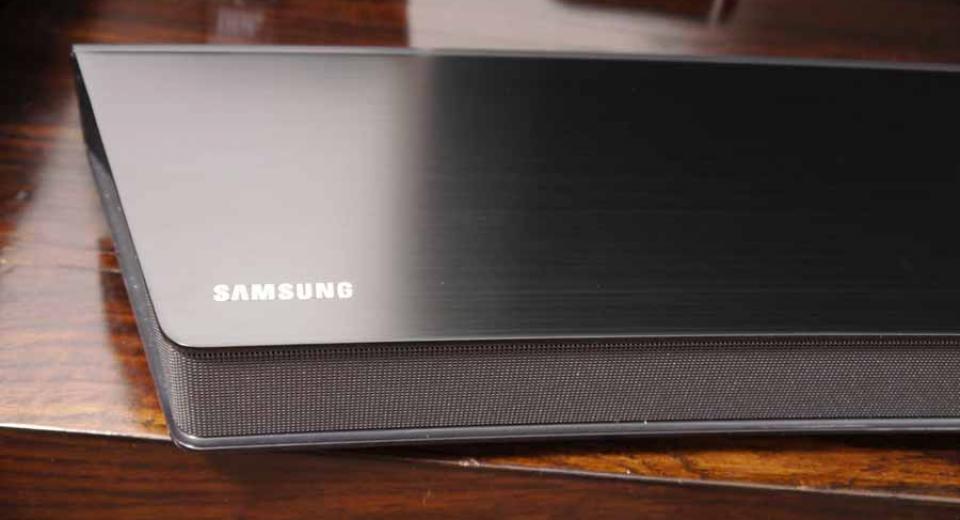 The HW-J8500 is Samsung's latest soundbar and boasts a nine-driver configuration with an active wireless subwoofer. As the curved design suggests, the J8500 is intended to compliment Samsung's latest curved screen TVs and its dimensions mean it is best suited to screen sizes of 65 inches and bigger. The J8500 also comes with a remote control, includes HDMI input and output and supports Samsung's multi-room system. So if you're looking to beef up the sound on your new Samsung curved TV, the HW-J8500 just might fit the bill, although at £899 it's a fairly hefty bill. Let's see if it's worth it...

Aside from the obviously curved nature of the J8500, the overall design is attractive with a largely metal construction and a black brushed metal finish; although a silver version is also available. The build quality is excellent and the Samsung has a well engineered and solid feel to its construction. The chassis sits on three feet that effectively support and isolate the soundbar whilst angling the front slightly up towards the listener. There is a grey metal grille that wraps around the front and sides of the soundbar, behind which are all the drivers. At the top centre of the soundbar are raised buttons for power, volume and input select. Beneath these controls to the left, behind the metal grille, is a simple LED display that shows the selected input, the volume, sound modes, the surround sound mode and the subwoofer level. There is also an active wireless subwoofer with a black brush metal design that matches the look of the main soundbar. The subwoofer can be positioned either horizontally or vertically, which makes it easier to install in the room and Samsung include optional feet for this purpose.
The design is attractive and the build quality excellent but the J8500 is intended for big screen TVs.

In terms of connections there is a recessed area under the soundbar where you'll find an HDMI input and an HDMI output that supports ARC (Audio Return Channel). There is also an optical digital input and a 3.5mm analogue mini-jack. There's also a LAN socket for a wired connection as part of Samsung's multi-room system, along with a USB port and built-in Bluetooth. It's a shame that the J8500 only includes a single HDMI input, especially given its price, but otherwise this is a decent set of connections. The J8500 comes with a handy remote control that is small, nicely designed and comfortable to hold. All the buttons you need to control the soundbar are on the remote including power, volume, mute and input select. There are also some basic buttons for controlling a connected device, as well as buttons for selecting the sound settings, the sound modes, turning the surround mode on or off, adjusting the subwoofer level and streaming music via Samsung's multi-room system.

As you would expect with a flagship product, the J8500 comes with plenty of features including an array of nine drivers behind the metallic grille with dedicated amplification - a total of 350W including the subwoofer. These drivers are positioned along the front and now add a centre speaker, which means you have a proper three-channel setup, along with side-firing speakers to create a wider soundstage and a greater sense of immersion. The J8500 also uses active crossovers for each driver, which Samsung say can direct frequencies to the correct speaker with greater accuracy than passive crossovers.

Along with the the multiple driver array on the soundbar itself, the J8500 also comes with an active wireless subwoofer. Samsung claim that their new Multi-Air Gap subwoofer can deliver deeper bass than a conventional subwoofer and it's design allows for either vertical or horizontal installation. The J8500 can play high resolution audio up to 96kHz/24-bit but if you're listening to compressed material there is also High Frequency Audio Restoration to help improve the perceived playback. In addition the J8500 can decode Dolby Digital and DTS sound formats but only the lossy varieties.

The J8500 also supports Samsung's multi-room system and although we weren't in a position to test it directly, we know how effective their approach is from our reviews of the M7 and M5 units. The system allows you to connect all the compatible units together via a central hub and thus seamlessly stream music to multiple devices around your home. The J8500 also includes a number of sound effects (Standard, Music, Voice, Sports, Cinema and Night), as well as a pseudo surround mode that creates a greater sense of immersion and Clear Voice for greater vocal clarity.
Despite an extensive set of features, the J8500 remains very easy to setup and operate.

Although the J8500 includes a number of features, it's still very easy to setup. The soundbar itself can either be positioned on a flat surface in front of the TV or it can be wall mounted using a provided bracket. Whichever option you choose, the result will be a highly stylish addition to your curved TV that will definitely improve your audio experience. The soundbar connects automatically with the wireless subwoofer when you turn it on but should you have any issues, you can can pair the two units manually. The subwoofer can be installed vertically or horizontally and the are are feet provided for the purpose. As always careful positioning of the subwoofer can pay dividends but there is also a subwoofer level control for better integrating the bass with the soundbar itself.

In terms of other setup procedures, the J8500 becomes discoverable when you select the Bluetooth input mode, making it easy to pair to your smartphone or tablet. You can connect a single device to the soundbar via HDMI and also connect to the TV itself via HDMI, which means you can take advantage of the ARC support. Other devices can be connected via optical digital, USB and auxiliary analogue. There's a LAN port for a wired connection and a WPS button for the built-in WiFi, both of which can be used in conjunction with Samsung's multi-room system. If you want to try any of the sound modes you just toggle through them on the remote and you can also turn the surround mode on and off. Finally there are bass and treble controls if you feel the need to adjust the sound.

The first thing you immediately notice is that the J8500 can deliver a great sound performance, regardless of what you're watching. The sheer size of the soundbar means that the Samsung can deliver an open and wide soundstage with great stereo separation. Although the curved shape results in the sounds are being projected more towards a central point, the addition of side speakers means that there is still width to the image and a greater sense of immersion. The use of multiple drivers and a proper three-channel approach means that the J8500 is able to deliver a detailed front soundstage with nicely defined dialogue.

The mid-range is particularly well handled, along with some precisely reproduced high frequencies and the active subwoofer does an excellent job of providing plenty of well integrated bass. The excellent build and supportive feet isolate the soundbar effectively, especially if it's on a solid surface, whilst the flexibility in terms of subwoofer placement means that you can create a sound that has a deep low-end presence. As a result when watching films there is a big room-filling sound that really opens up at the front and provides impact where necessary.

However the J8500 can also be quite subtle, with a detailed and precise performance that makes listening to music equally as enjoyable. The addition of a middle speaker means that dialogue is always clear whether you're watching movies, documentaries or the news, without the need to use the Clear Voice feature. The various sound modes can be a bit gimmicky and we never felt the need to use them, preferring the unadulterated sound produced in the Standard mode. However, engaging the surround sound mode can prove useful for making movies feel a bit more immersive.
Thanks to its size and driver layout, the J8500 delivers an impressive sound quality and open sound.

Well that really depends on what kind of TV you've got but clearly if you have one of Samsung's new curved screen TVs then the HW-J8500 is the obvious choice. It has been specifically designed to match their larger screen sizes and in that sense it fits the bill perfectly. It isn't cheap but you get great build quality, an excellent audio performance and plenty of features; with the limited number of HDMI inputs as our only real complaint. However there are plenty of other connections, along with built-in Bluetooth and WiFi for the multi-room features, which means you can connect the soundbar to the rest of your Samsung network

The J8500 creates an enjoyably precise and detailed front soundstage and an effectively wide one, despite its curved shape. It also has loads of power and can go quite loud without becoming brittle or distorting. The subwoofer has plenty of low-end presence and can be easily integrated into the room in either a horizontal or vertical configuration. Which means whatever you're listening to the J8500 can deliver the goods in terms of sound quality and performance. There are also a number of sound modes available and a surround sound mode that does help create a greater sense of immersion.

Assuming that you're determined to take the soundbar route and aren't considering a genuine surround sound system like Samsung's HT-J7750, then there are literally hundreds of soundbars to choose from. If you have a flat TV, Samsung or otherwise, the HW-J8500 might look a little strange and in fact be difficult to position - depending on the TV's stand. So if you're looking for a more traditionally shaped sound bar then the Yamaha YSP-2500 makes a great alternative at a very similar price.

However if you do own a curved Samsung TV then the shape will somewhat limit your soundbar options and especially for the bigger screen sizes, the HW-J8500 becomes the best option and is definitely worth a recommendation. Although if you're not interested in the multi-room features then the HW-H7500 - Samsung's model from last year - might be worth investigating. The H7500 is a great performer and can be picked up for around £599, making it a cheaper but equally effective alternative.